Western media mocks China’s highly successful response to the coronavirus pandemic: The case of the city of Xi’an 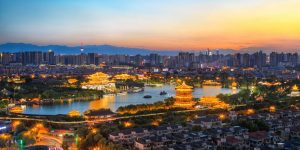 State and corporate media in the West are awash in propaganda disguised as news reports that belittle and mock China’s highly successful response to the coronavirus pandemic. Here are examples of recent headlines in leading Western media:

It all sounds terribly grim, but these news outlets are not just living in a parallel world, they are in a parallel universe. China is reporting less than 200 daily new cases of Covid-19 so far in 2022. The United States, with one third the population of China, has been reporting more than 700,000 (!) daily cases during that same time. The U.S. recorded nearly 1.5 million new cases on January 11 alone. China has recorded some 5,000 deaths from Covid-19; the U.S. more than 860,000! Two very different worlds, indeed. 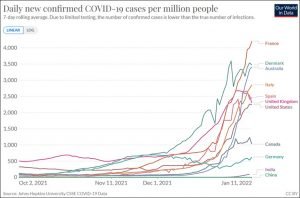 Australia has been reporting even more cases, per capita, than its North American big brother. And as the chart here shows, all of the countries of the warmaking NATO military alliance are reporting extraordinary numbers of cases, injuries and deaths from Covid-19. Hospitals are cracking at the seams due to overcrowding. Health care staff are at the breaking point or beyond after two years of non-stop Covid emergency. Countless other Covid-related emergencies are hobbling and threatening to undo the health care systems in the Western countries. Altogether, it is no exaggeration to say that the negligent political and public health leaders in the West are a dire threat to global public health.

The article by Keith Lamb published here below as well as related readings listed below that describe how public health officials and the people in China are going about their work of vanquishing the coronavirus. Vaccinations play an important part, of course. But unlike in the Western imperialist countries, the three other essential parts are a mobilized and informed citizenry, a vast corps of dedicated medical professionals and other public health workers; and a serious and responsive government.

Official Covid policy in the West (pious words aside) has been steadily moving toward ‘Let it rip.’ The two leading public health officials in the U.S. made this formal on January 11 in saying they were throwing in the towel on stopping Covid. Janet Woodcock, head of the U.S. Food and Drug Administration, told a Senate committee that instead of focusing on stopping community transmission, the U.S. government should seek to ensure “continuity of operations” in hospitals, public transportation and other essential businesses.

Anthony Fauci, chief medical advisor to the U.S. president, told an interview on CNN on January 11, “Omicron, with its extraordinary, unprecedented degree of efficiency of transmissibility, will ultimately find just about everybody.” But here is the ‘good news’, according to Dr. Fauci: “Some of those who have been vaccinated will get infected, maybe a lot of them. But very likely, with some exceptions, they will do reasonably well in the sense of not having hospitalization and death.” ‘Reasonably well’!

Attitudes to Covid-19 illness have become so lax that U.S. media outlets are now regularly publishing commentaries and editorials cautioning against ‘getting it over with’ by avoiding Covid-19 protection measures and contracting the virus.

Why are the Western imperialist governments railing against China’s successful Covid response? One reason is the new cold war being waged against China with propaganda, trade sanctions and threats of war. Another is in order to deflect attention from the Western government’s own, disastrous Covid policies.

The overall story is that China’s mixed economy–a combination of state ownership of financial and industrial enterprises, state-directed economic planning, and vast numbers of Chinese- and foreign-owned manufacturing enterprises–is showing that a path forward for human development and international solidarity is possible. This is true notwithstanding great uncertainties caused by global warming, imperialist militarism, and rising social inequities in the imperialist-dominated world. China’s example of an economy and social formation that has lifted hundreds of millions of people out of poverty, beaten back the coronavirus pandemic and provided vital economic assistance to countries in the less developed world is one which the imperialists are determined to crush. Let us act to ensure that never happens.

Western media mocks China’s highly successful response to the coronavirus pandemic: The case of the city of Xi’an 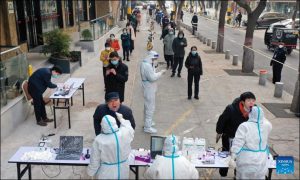 With the total number of new Covid-19 cases since December 9 reaching 1,573 in Xi’an, capital city of Shaanxi Province, local and central government, backed by voluntary citizen support, are doing everything in their power to extinguish the epidemic. China’s Vice Premier Sun Chunlan has advocated for decisive and resolute measures to curb the outbreak, and, in response, the local government has backed up her words with concrete action.

With all of Xi’an’s approximately 13 million residents under lockdown, supply chains have been kept efficient to ensure that essential items such as food and medicine are available to all, especially those in need. Ten medical teams and a 24-hour hotline provide treatment to those isolated. Donations of food and supplies are not just pouring in from neighboring local governments but private citizens too.

In an attempt to belittle China’s responsible actions, some Western media have called the measures “severe” and “harsh”. One would think from a recent article in the New York Times that China’s actions are sheer lunacy, considering that the article says, “China, … is virtually the last country still trying to eliminate the virus rather than live with it.”

The Times article goes on to say that other countries have abandoned “hard lockdowns, believing their economic and human costs to be too great.”

Considering China has had no Covid-19 deaths for months, how can one be so negative about China’s efforts? Indeed, looking at statistics since the outbreak of Covid-19, China’s swift and resolute measures in Wuhan and the rest of China saved countless lives. Looking at the rate of deaths from Covid-19 per million population, China’s rate at just three remains one of the lowest in the world, standing in 208th place out of a total of 224 countries.

Given that China is home to the largest population and has some of the densest urban populations in the world, this figure is remarkable. The countries that have fared better than China are mostly remote Pacific states with small populations.

In contrast, the Covid death rate per million in the United States stands at an atrocious 2,537, giving it the ignoble position of 21st in world standings.

Reports of China’s “harsh” and “severe” measures merely act as propaganda directed at the Western reader to muddy the image of China’s governing system. Readers are expected to accept high death tolls as the “price for freedom”.

While Westerners do value individual freedom over collective action, could it be that this propaganda disparaging China’s governing system covers up inadequacies in Western liberal democracies?

Secondly, the U.S. has resorted to the excuse that market forces would be disrupted as its reason for not enforcing “severe” measures. This, then, begs the question of who is in the driving seat of the U.S. government, the forces of capital or the democratic will of the people?

Whatever the case may be, China’s stricter measures have led to relatively positive economic results in the end. The BBC has reported that China’s economy grew a record of 18.3 per cent in the first quarter of 2021 compared to the same quarter in 2020. Meanwhile, the U.S. economy grew at an annualized rate of 6.5 per cent. The simple fact is that people’s needs should be the basis of any economy and preserving human life is preserving freedom.

With the Winter Olympics to start in February 2022, China is responsible for not only its citizens but also the foreign visitors and athletes that will be arriving. Home to the Terracotta Warriors, the city of Xi’an is both a tourist and an economic hub, attracting large numbers of people. A laissez-faire attitude such as the one on display in the United States would lead to Covid-19 spreading far and wide, threatening the health of the entire nation and risking the cancellation of the Games.

Imagine if China followed the U.S. approach and those attending the Olympic Games were put in peril? The Western press would certainly have a field day demonizing China which is, unfortunately, ‘damned if it does and damned if it doesn’t’.

Considering that in New York city alone, 110,000 people have tested positive for Covid-19 since Christmas Day, those in glass houses shouldn’t be throwing stones. Instead, humans should acknowledge that we share a common enemy in an unseen virus and should come together in solidarity, learning from everyone, including China, which has grown its economy while preserving human life.

(Keith Lamb is a graduate of the University of Oxford with a Master of Science in Contemporary Chinese Studies.)

Related readings compiled and recommended by A Socialist In Canada:

*  The China Covid coverage in the New York Times needs to acknowledge reality, by Ari Paul, Fairness and Accuracy In Reporting, Jan 20, 2022  The New York Times report (1/12/22) on the response to an outbreak of Covid-19 in the Chinese city of Xi’an featured over-the-top hand-wringing about “authoritarianism” and a complete erasure of the dangers of the coronavirus. Had this article been about Covid-19 response in Europe or the United States, one could swear it was from InfoWars or some other far-right, Covid-denying fringe outlet. China’s ‘zero Covid’ policy is indeed a major outlier in the world’s approach to the pandemic…
*  What can the world learn from China’s response to Covid-19?, report in the British Medical Journal (The BMJ), Dec 2, 2021
*  Yes, there really were only two COVID deaths in mainland China in 2021. Here’s how they did it, by Rosa Astra and Benjamin Zinevich, Liberation News (U.S.), Jan 6, 2022
*  Xi’an resident: My 14 days under lockdown, four-minute video report by CGTN, Jan 6, 2022