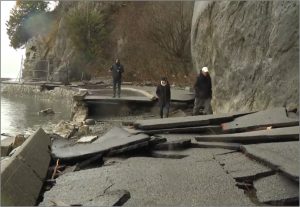 VANCOUVER BC–Vancouver’s impressive ‘seawall’ oceanside walk along the edges of historic Stanley Park as well as the seawall along the shoreline of West Vancouver (north shore of Vancouver harbour) were torn apart in places on January 7 by a winter wind storm. This news report, with video, reports on the damage.

The storm produced wind speeds of some 80 km per hour, well below the maximum windspeeds that occasionally hit the British Columbia coastline. Past storms have hit hurricane level one speeds of 120 km per hour or higher. (See here and here for some past storm records).

Vancouver city park officials are not yet saying when and if the Stanley Park Seawall can be rebuilt. It underwent a multi-million-dollar ‘upgrade’ in 2018 due to earlier, accumulated storm damage. That rebuild has now been torn apart in places. 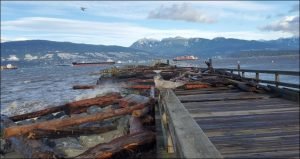 View of English Bay from damaged pier at Jericho Beach

Also heavily damaged was thewooden pier at Jericho Beach, located on the southern shore of Vancouver’s outer harbour (known as ‘English Bay’). The bay serves as anchorge for cargo ships awaiting entry into the very narrow opening into Vancouver harbour. A plan was approved some four years ago by the city of Vancouver to rebuild the pier with steel and concrete, raising its pedestrian platform by 2.5 meters.

The harmful environmental consequences of the oceanside and riverside seawalls in Vancouver region as well as potential alternatives for shoreline protection have received little or no attention by governments and corporate media. Here is an insightful report by a video journalist produced in 2019 that looks at the history of the Stanley Park Seawall and the ecological alternatives that are possible in place of ‘building back’ the wall bigger and bigger (though not better). 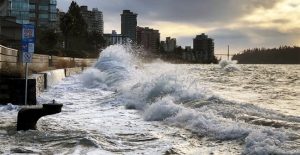 Vancouver city and region have many hundreds of kilometers of saltwater shoreline, including along the Fraser River that pours into the ocean here. Piled alongside or on top of these shorelines and tidal riverfront are roads, highways, railways, bridges, an international airport (which lies largely unprotected at sea level), major bulk and container shippings terminals (Canada’s largest) and thousands of houses and apartment and condominium complexes.

The region is not even exposed to the open ocean–it lies on the Salish Sea (aka the Georgia Strait), well protected from the open Pacific Ocean. So how well prepared is all of this from rising ocean levels? Not very. 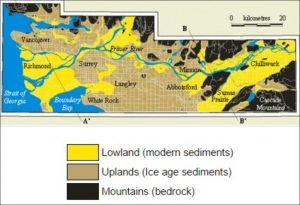 Here is a map showing the Fraser River floodplain (in yellow) amidst which sits metropolitan Vancouver. Viewers may recall the disastrous flooding of this very region just two months ago. (See: Rainfall flooding emergency in British Columbia exposes Canada’s vulnerability to global warming and the negligence of its rulers, by Roger Annis, last updated on Dec 4, 2021).

That rainfall disaster closed or disrupted Canada’s road and rail connections to the rest of Canada for weeks. The Trans-Canada Highway remains closed through sections of the Fraser River Canyon due to rainfall damage, while, the Coquihalla Highway section of Highway Five, the main highway route between Vancouver and the rest of Canada, is open only to truck and emergency traffic for the foreseeable future due to ongoing, major repairs. Highway 8, which connects the small city of Merritt on the Coquihalla Highway to the town of Spence’s Bridge on the Trans Canada Highway in the Fraser Canyon along the Nicola River for 70 km, was entirely destroyed in places and will somehow be rebuilt.

A recent published news report said it will cost untold billions of dollars to improve the flood defenses in Vancouver region.

Canada’s corporate and the country’s political leaders have proven unwilling to better protect the country’s population and  natural ecology from more frequent and larger storm events. That’s because for them, the imperatives of the capitalist growth and expansion cycle prevail over protection and enhancement of the natural environment as well as the humans who live here.

They parade at home as well as on the international stage as being ‘concerned’ about global warming and its consequences. But it is all show. Canada is one of the worst per capita emitters of greenhouse gases in the world, and it’s ‘full steam ahead’ for yet more production, burning and export of fossil fuels. The tar sands extraction fields in Alberta and Saskatchewan are expanding, boosted by the federal government’s purchase of the Trans Mountain Pipeline in 2018 for the purpose of expanding tar sands bitumen export from Alberta through the port of Vancouver. It’s true in the natural gas fracking fields in northeastern British Columbia, undergoing major expansion in order to fuel an entirely new industry on the BC coastline–liquefied natural gas production. It is true for the port of Vancouver, which is the largest coal-exporting port in North America. And it is true for the ongoing sprawl and related highway construction in all the urban regions of Canada, particularly in southern Ontario.

The emperor and its allies in the NATO military alliance have no clothes. Far from addressing the global warming emergency, they are embarked upon military threats and trade wars against China and Russia. They seek to overthrow governments in such disparate places as Iran, Cuba and Venezuela when these governments refuse to dance to the emperors’ bad, off-key tunes. They offer phony ‘green capitalist’ solutions to the crisis they have created–electric automobiles and trucks (even airplanes, so they dream!); ‘capture and storage’ of greenhouse gas emissions; ‘alternative’ energies equal to, or greater, than the volumes of fossil fueled energies (including nuclear) which they create; and on and on.

Luckily, a new power is on the rise in the world that can, over time, oust the climate-wrecking plutocrats. That can lead the world down an alternative path for human development, one that combines ecological protection with far-reaching measures for social justice. That path is called ‘degrowth’ (or call it ‘drawdown’).

We saw this new, rising power in evidence in the protests and other actions and dialogue that surrounded the international ‘COP 26’ conference in Glasgow, Scotland in November 2021. Greta Thunberg put it movingly in her short speech to protesters at COP 26, addressed to world leaders (watch here). She concluded her speech with: “They cannot ignore the scientific consensus, and above all, they cannot ignore us, the people, including their own children. They cannot ignore our screams as we reclaim our power. We are tired of their blah-blah-blah. Our leaders are not leading. This (gesturing to audience) is what leadership looks like!”

Addendum: The winter storm that slammed Vancouver on January 7 also struck the city of Seattle and surrounding region some 230 kilometers (140 miles) to the south. Record snowfall and rainfall that week cut the city off from the rest of the U.S. through the mountain passes heading east and even the major highways heading south to Portland.