By Roger Annis, August 27, 2014, published on the ‘Speakout’ feature of Truthout and on Rabble.ca 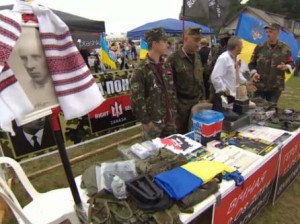 The infamous, fascist and paramilitary organization in Ukraine known as Right Sector has established a branch in Canada and was present and fundraising for military equipment at the annual, Ukraine Independence Day celebration in Toronto on August 23. The group’s efforts that day were featured in CBC and Radio Canada (French language CBC) national television news broadcasts. The two broadcasts are here: CBC and Radio Canada .

In the CBC broadcast, Minister Alexander said he was unaware of the presence of Right Sector Canada fundraising at the event but was “very proud” to be taking part. As he spoke to CBC, four Right Sector flags were visible in the background. 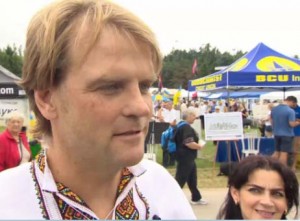 Canada’s Minister of Citizenship and Immigration, Chris Alexander, tells CBC that Right Sector presence at Ukraine Independence Day event in Toronto is “rumour”. In the background can be seen three of the red and black flags of Right Sector.

Alexander took umbrage at the Radio Canada reporter’s questioning of his presence at the event, considering the Right Sector presence and fundraising. He appeared to defend the presence of the fascist group and its fundraising when he replied very aggressively to the reporter’s question on the topic, saying. “Are you also holding the same kind of interviews with Canadian or other companies who are doing business with the government of Russia? Is the money generated by their activity serving to feed the war machine of Vladimir Putin? Have you done such interviews?”

He told CBC that the presence of the Right Sector was “rumour” and went on to say he was “definitely proud to be at this event”. Television reports showed several hundred people in attendance.

Marijka Stadnyk, organizer of the event on behalf of the Ukrainian Canadian Congress, was asked about the Right Sector presence by Radio Canada and said, “Remember, these are people on the territory of Ukraine defending Ukraine. These people have a right to defend their territory.” She added that in her view, the extreme right in Ukraine is only a tiny political force.

Stadnyk told CBC, “The question of weapons, I believe, is going to become more and more important on the world scene because you can’t leave people who are trying to defend their country undefendable”.

Radio Canada explained that the spokesperson for ‘Right Sector Canada’ at the event, Petro Shkilnyk, has recently returned to Canada from combat in eastern Ukraine.

A young man told the CBC reporter that he moved to Canada eight years ago and is “resolved” to return to Ukraine to join the Ukraine army and engage in the war in eastern Ukraine. 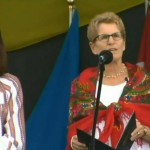 Premier Wynne gave a speech to the event defending the war being waged in eastern Ukraine by the governing regime in Kyiv. She said, “They are defending the very independence that we are here to commemorate.” She declined to speak to journalists afterward.

A photo on Twitter shows a march of some scores of people that took place as part of the day’s events. The march crossed the Humber River Arch Bridge and among the flags being carried is the red and black flag of Right Sector. Ukrainian flags were prominent. The Right Sector flag is located at what appears to be the front of the march.

Petro Shkilnyk was asked by CBC if his group’s fundraising was intended for the purchase of weapons and he responded that funds would be used to purchase of ‘self defense’ equipment. He and his fellow Right Sector paramilitaries were wearing paramilitary uniforms

Shkilnyk elaborated on the equipment to be purchased in speaking to a CTV reporter. The CTV report showed a soldier mannequin that was part of the fund pitch, illustrating the equipment that donor’s money could purchase.

The CTV report stated that fundraising for military equipment has been going on for some time already in Ontario. The reporter approvingly described the fundraising as, “money that will help the fighters on the ground” in eastern Ukraine. 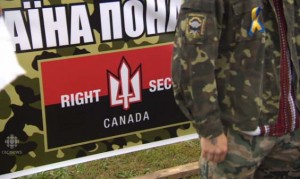 A  Catholic publication in Switzerland, Cath, published an article on the Toronto event and it affirms that the group was raising money for arms. It cites the Radio Canada reporter: “The coordinator of the Canadian branch [of Right Sector], Petro Shkilnyk, explained that the Ukrainian members of the group do not have arms and the money being raised that day would serve to buy some”.

Right Sector is also active in the United States. It held a public forum in New York City on June 7 and it maintains a ‘Right Sector USA’ Facebook. The group in Canada also has a Facebook page.

The ‘Right Sector’ in Ukraine is an amalgamation of fascist groups. It obtained close to one per cent of the vote in the May 25 presidential election in Ukraine. The total vote for the extreme right (including the Svoboda Party and the Radical Party) was ten per cent. The extreme right is expected to score higher in the Parliamentary election that President Petro Poroshenko has called for October 26.

The far right has formed militias to fight alongside the Ukraine army in the murderous war against the people of eastern Ukraine that was launched in April of this year. The militias are armed and trained by the government and are used to supplement the conscript army whose soldiers have consistently shown reluctance to follow orders to attack urban centers and otherwise kill fellow citizens. The rightists have also volunteered in large numbers to join the revived National Guard of Ukraine.

A recent report in UK daily The Telegraph described at some length one of the most murderous of the rightist militias operating in eastern Ukraine, the Azov Battalion.

Right Sector leader Dmytro Yarosh recently called on the Kyiv regime to cease all criminal investigations against his group’s members, release any of them who are in prison and purge the regime’s interior (police) ministry of anyone prosecuting extreme rightist for crimes. He said his group would lead an armed revolt against the central government if its demands were not met. (See also a BBC report on the subject.)

Minister Alexander and Minister for Multiculturalism Jason Kenney issued a statement on August 23 marking ‘Black Ribbon Day’. They call this a day of commemoration of the victims of communism and Nazism and say that the date is commemorated in “nearly” a dozen countries in central Europe under different names. The Harper government made ‘Black Ribbon Day’ an official day of commemoration in Canada in 2009.

The ministers are no doubt aware that the Right Sector fascists in Ukraine place a great deal of political importance on promoting and rehabilitating the reputations of the Ukrainian nationalists who collaborated with Nazi Germany during World War Two, including the fascist Stepan Bandera. That rehabilitation effort involves much of the Ukrainian nationalist political spectrum. In January 2010, President Victor Yushchenko conferred Ukraine’s highest honor, ‘Hero of Ukraine’, on Bandera. Yushchenko finished fifth in the first round of the presidential election held that same month. Hundreds of monuments and statues of Bandera have been erected in western Ukraine in recent years.

Toronto’s print media has been silent on what the CBC and other television reports revealed about the pro-war and pro-fascist organizing that took place at the Ukraine Independence Day commemoration in Toronto. The participation of high profile, mainstream politicians in the event has similarly escaped scrutiny.

In recent days, towns and cities in eastern Ukraine have suffered some of the most intense artillery bombardments of the entire war at the hands of the regime in Kyiv. Non-combatants are now being killed daily, sometimes in the several dozens, as residences, hospitals and schools are struck by shelling.

For all the bombardments, the Ukraine army and the fascist militias are proving unable to defeat the self-defense forces in the larger cities of Donetsk and Luhansk regions, the territory that pro-autonomy people now call ‘Novorossia’.

The Ukraine government and its NATO allies have stepped up pressure on the Russian government to assist them in quelling the popular rebellion in eastern Ukraine. The rebellion is fueled by resistance to Kyiv’s austerity economic program and the presence of fascists and extreme rightists in its government. Russia is calling for an immediate cessation by Kyiv of its military operations; Kyiv has for weeks refused this and similar calls.

Russia’s foreign ministry says that 2,250 civilians have died since Kyiv launched its offensive in April, but many say that figure is understated. Kyiv says more than 700 of its soldiers and militia paramilitaries have died; that is said by self-defense fighters to be grossly understated. [1]

Notes:
1. The office of the UN High Commissioner on Human Rights has shown a terrible bias in favour of Kyiv in its monthly reporting of the human rights situation in Ukraine. Its reporting of casualty figures is no more reliable. Its spokesperson Cecile Pouilly told Reuters on Aug. 13 that an average of “60 people” daily have died since Ukraine launched its military operations in eastern Ukraine in April (Kyiv calls this an “Anti-Terrorist Operation”). But the office says that “at least” 2086 people had died by August 10. That’s an average of 19 per day.

Roger Annis is a writer and an antiwar activist in Vancouver, Canada. He was a delegate to the July 6, 7, 2014 antiwar conference in Yalta, Crimea. His writings for different publications on Ukraine are compiled here.