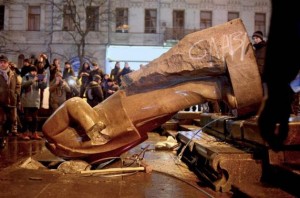 When the monument to Lenin in Kiev was demolished, one of the writers for the Ukrainian website Liva (“Left”) joked sadly: the modern Ukrainian state was created as a result of a revolution, and would last just as long as the corresponding monuments remained standing. If the statue of Lenin was smashed, Ukraine too would fall to pieces.

It was, in fact, only a few weeks after the “fall of Lenin” that the collapse of the state began.

When people argue that Ukraine was constructed early in the 20th century on an artificial basis, it can be objected that the same might be said of almost all European nations, including highly successful ones.

The French kings, and then the republic, applied considerable efforts to assembling disparate territories and communities into a unified society that later served as a model of national identity for all Europe. Bismarck needed to strive at length to ensure that Hanoverians, Saxons and Prussians recognised themselves first of all as Germans.

The trouble, however, is that the “work” of the Ukrainian rulers over the past quarter-century has had precisely the opposite effect. The problem lies not in the “constructed nature” of the Ukrainian state, but in the construct itself, or more correctly, in what the ideologues and practitioners of “independence” did with this construct.

The elements from which modern-day Ukraine was “assembled” (not only territorial elements, but also economic, social and cultural ones),were gathered together in the course of the Russian Revolution, and during the processes of building, defending and developing the Soviet Union. As with any such process of construction, these elements in the course of historical development could potentially be “ground into” one another, fitted together into a unified whole, and integrated. Or, they could spin off in different directions. For the development of the state to follow the road of national integration, appropriate policies were necessary. Formally speaking, this was the goal proclaimed by the presidents who succeeded one another in Kiev.

But in practice, all their measures served to promote a directly opposite result. Trying mechanically to implant a “Ukrainian identity” that was artificially conceived and did not answer the real needs of the majority of the population, they essentially robbed the people of any chance of independently working out a common, collective identity.

A state will always create its own myths, sanitising and idealising history, but these myths will only work if they do not absurdly and flagrantly contradict the logic of actual historical development, along with obvious facts that lie on the surface and remind people constantly of their presence.

This means at the very least that the Ukrainian state was obliged—even if merely for the sake of its self-preservation—not just to recognise the Soviet heritage but also to rest on it and develop it, since this was the heritage of the very epoch during which Ukraine came together within its modern boundaries and in its contemporary form. Properly speaking, all successful post-colonial states from Canada to India have acted in this fashion. However critically they might regard the British Empire, they rest on the structures established by this empire and do not deny this fact. They are proud of the role they themselves played in the history of this empire and stress that without them, the empire’s history would not have been possible. This applies in particular to the Soviet Union, which at least in relation to Ukraine, did not act as a predatory foreign empire.

Ukraine’s neighbour Belarus has been highly successful in making use of the Soviet heritage as the basis for its identity as a state, often counterposing its own fidelity to Soviet tradition to the actions of Russia in disowning this tradition. However we might view the regime of “Papa” Lukashenko, the modern Belarusian state has proven viable, though no one initially might have believed this possible.

No less absurd, in Ukraine, has been the attempt to make Ukrainian the sole official language. In practice, this has doomed the state to provincialism and to alienation from its own cultural roots. It would be completely natural and effective to proclaim both Ukrainian and Russian as state languages, and to promote this, together with a genuine federalism, as the basis for and proof of Ukraine’s European choice. Ukraine would thus provide a counterbalance to a centralist and uniform Russia. But the Kiev elites have acted in directly opposite fashion.

The problem is not that the Russian language is subject to particular suppression in Ukraine. No one is prevented from speaking or writing Russian, and attempts to enforce the Ukrainianisation of education have petered out time after time. Ukraine has needed Russian not simply as the language that the population in almost all the largest cities speak and will continue to speak, but as a powerful instrument for state building. Rejecting Russian as such an instrument would automatically throw the state system back by a century or more.

A language is not simply words, but the product of development over many centuries, a tool sharpened and refined for the performance of particular tasks. In order to bring the Ukrainian language to the same qualitative level as Russian (or English, or French) would require 100-150 years. It is no accident that such countries as Ireland or India, after freeing themselves from British rule, not only refrained from driving the English language out of the state arena, but on the contrary, made it an obligatory element of their political culture.

If a decision were taken to make Ukrainian the exclusive language of state affairs in Ukraine, it would be necessary to invest money in translating not just hundreds but thousands of books on philosophy, politics, mining, astronomy, sociology, archaeology and history from all the languages of the world. In order to banish the Russian language as a medium for the transmission of global knowledge and a bridge to European culture, it would be necessary to spend 20 years raising a generation with a command of English to match that of the average Scandinavian, and at the same time to train a new intelligentsia that along with possessing faultless English, was also fluent in French, German and Italian.

This would all cost a great deal of money. But if the funds and the willingness for it are lacking, Ukrainians need to choose from the outset not to go to war on the Russian language and culture, but to employ them as resources for their own national construction. They need to declare Gogol, Babel and Bulgakov to be national classics, explaining to the entire world how much closer the speech of Kiev is than that of Moscow to the roots of the Russian language, and demanding that Russia, Belarus and Kazakhstan pursue an agreed linguistic policy on the basis that the Russian language is their common property.

Instead of this, vast sums have been spent on feeding a nationalist intelligentsia that deliberately refuses to engage in any positive cultural activity, since the criterion for success has been loyalty to the official ideology and a better knowledge (as far as possible) of the “native tongue”. But a language in which new cultural treasures and serious scholarly texts are not being created is not only failing to develop; it is not genuinely alive, and is undergoing decline. Now that the market approach to book publishing has replaced the Soviet policy of supporting Ukraine’s national literature and culture, the degradation of these latter is inevitable.

The nationalist intelligentsia has transformed knowledge of the “native tongue” into a source of power, a source that operates only under conditions of constant confrontation with other languages and cultures, that is in objective contradiction with the everyday practice of society, and that guarantees incessant and painful conflict at the very foundations of the life of the state.

Nationalism is a good ideology for mobilising aggressive movements, but not unfortunately for constructing a state. Not a single successful modern nation has been built by nationalists. No people can develop under conditions in which its political life and state ideology are based on neurotic contradictions.

Ultimately, however, political and cultural contradictions are based on economic practice. The economy of Soviet Ukraine combined the backward agrarian west and the developed industrial south-east within a unified organism. During the Soviet epoch, planned development was aimed at raising the west to the level of the eastern regions, and in part this was successful. But in the course of the post-Soviet decades we have observed the collapse of industry in western Ukraine, which has now become increasingly dependent on the redistribution of resources from the east.

There is nothing essentially wrong with redistribution. But for this to take place, it was also necessary to allow the Ukrainian south-east to develop, to grow, to expand its economy and to modernise itself. It was necessary to invest money in the region. But this was not done; the resources of the south-east were used by the oligarchs in purely parasitic fashion. The industry of the south-east was like a milk cow that no-one fed.

Meanwhile, the redistribution of resources did not bring prosperity to the western regions either. Just enough reached them to let them survive, but not enough to allow them to develop. The western regions remained poor, and the population became increasingly declassed (it was precisely these declassed youth who provide the base for the Right Sector). But ever-greater sums went to support the parasitic elite in Kiev and its numerous hangers-on, from the owners of expensive restaurants to the innumerable public relations specialists and political scientists who provided the clientele for restaurants of a slightly lower class.

Just as inevitably as its cultural policy, the economic policy implemented by the Ukrainian state has doomed the state to collapse. The elite that has grown up on the basis of this economic policy is not only uninterested in development, but does not even understand what it is. Along with the hordes of the nationalist intelligentsia, and the no less numerous stratum of Russian-speaking ideological and political hirelings, the members of the elite all bear responsibility in one fashion or another for the downfall of the Ukrainian state.

This state no longer exists, and it will not be restored. A “cold” civil war began in Ukraine long before the first shots rang out. The economic crisis and the subsequent political shocks then made certain that this conflict would advance to its “hot” phase.

The south-east has gone its own way, and here we are not speaking only of the Donetsk and Lugansk republics, but also of all the other provinces that objectively have finished up in the position of occupied territory. The resistance that is growing in these provinces has to develop its own program and concept of state construction, carrying out the tasks with which nationalist Kiev is not alone in having failed to cope.

Equally inept have been the leaders in Donetsk and Lugansk who by force of accident have reached the summit of power in their unrecognised republics. In order to hold out, Novorossiya [“new Russia”, a traditional name for the largely Russian-speaking eastern and southern provinces of Ukraine.] needs to discover its own political face, to solve the problems left unsolved by the old elite, and to transform itself as a society.

It may be that after a time we shall again see a Ukrainian state that is not divided by the fronts of a civil war. But this will be a fundamentally different state, constructed on the basis of quite different principles, not only political and cultural but social and economic as well. However tragic this might sound, the road to founding such a state lies through civil war. Ukraine will again be united only if the forces of the insurgent south-east raise their banner over Kiev.