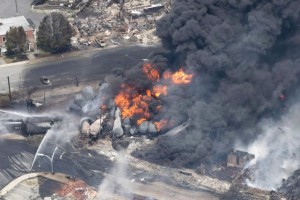 A U.S. bankruptcy judge has approved a $446 million Cdn settlement fund for victims of the fiery oil train derailment in Lac Mégantic, Quebec on July 6, 2013 that killed 47 people.

Judge Peter Cary in Portland, Maine, announced his decision Friday after Canadian Pacific dropped its objection to the settlement moving forward and a Canadian judge gave conditional approval. The settlement was the result of negotiations with about two dozen companies.

Barring any surprises, payments could be made to victims of the disaster by year’s end, said Robert Keach, the bankruptcy trustee. About $83 million is being set aside to settle wrongful death claims. “We’re very happy for the victims that we were able to get to this point. They’re the primary focus here,” Keach said.

A runaway train with 72 oil tankers derailed in the early morning hours of July 6, 2013 in  Lac Mégantic. It set off powerful explosions and much of the downtown was burned to the ground.

The disaster led to greater regulatory scrutiny of the use of trains to transport crude oil amid a production surge thanks to new technologies including hydraulic fracturing.

After the fires were doused, the train’s operator, Montreal, Maine and Atlantic, filed for bankruptcy. The settlement fund is tied to those bankruptcy proceedings in the U.S. and Canada. The fund was the product of negotiations with about two dozen companies with potential liability.

Robert Bellefleur, a member of a Lac Mégantic-based coalition that promotes rail safety, welcomed the judge’s approval. “It’s good news for people who were hit hard, who lost loved ones, homes, businesses,” said Bellefleur, who knew many of the victims. “It will provide comfort and maybe enable people to get back on their feet and live a more normal life, but without ever forgetting what happened.”

Canadian Pacific owned the track where the crude oil shipment originated and contended it bore no responsibility, since the train that derailed had a Montreal, Maine and Atlantic locomotive and crew and was operating on MMA rail. But Keach argued Canadian Pacific bears some responsibility for failing to properly classify the Bakken region crude oil, which was as volatile as gasoline.[1]

Canadian Pacific isn’t contributing to the settlement fund. The railroad had contended the compensation plan would have hampered its ability to defend itself from lawsuits, because the agreement provided legal immunity only to companies that do contribute.

But the altered amendment calls for a “judgment reduction provision” that would take into account the full settlement paid by others if Canadian Pacific is ordered to pay damages in the future. “Although CP was not at fault in the derailment, we have been working with the trustee for a solution that protects CP interests and allows payments to be made to victims as soon as possible,” said Canadian Pacific spokesman Martin Cej.

The settlement isn’t the end of the legal cases related to the disaster. Wrongful death lawsuits were on hold while the settlement was sorted out. Now Canadian Pacific could be sued in several jurisdictions, and there’s also a separate criminal case pending against several workers who are charged with criminal negligence causing death.

Notes by A Socialist In Canada:
[1] This paragraph is misleading. CP Rail transported the deadly cargo that blew up in Lac Mégantic from North Dakota to Farham, Quebec, just south of Montreal. MM&A then undertook to transport the train across Quebec and New England to where the railway owned by the Irving conglomerate was to pick it up and complete the journey. The destination was the Irving Oil refinery in Saint John, New Brunswick.

[2] There will be a public forum on railway safety to take place in Lac Mégantic on October 11, 2015 of all candidates for the electoral district in which the town is situated. The Canadian election will take place on October 19. Watch this space for a report of the October 11 forum.

Further reading:
*  Extensive news coverage (in French) from the town of Lac Megantic and surrounding region is provided by Ronald Martel, a journalist at the daily La Tribune in Sherbrooke Quebec. The newspaper is part of the La Presse (Power Corporation) chain of corporate newspapers in Quebec.