The three conglomerates that dominate print media in Canada—Torstar, which publishes the Toronto Star, the country’s largest daily newspaper; Woodbridge, which publishes The Globe and Mail, the largest national daily; and Postmedia, which controls the daily newspapers of most cities in English Canada–speak on Ukraine as though they all attended the same indoctrination sessions. Viewed through their prism, Ukraine is topsy-turvy and bears little resemblance to reality. Human rights, moral standards and the concerns of the people of the east of the country are given no standing, no voice and no sympathy. 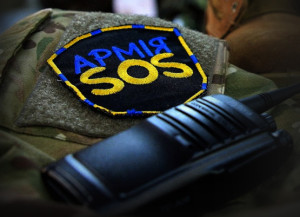 Insignia of Army SOS, one of the far right projects promoted by Toronto Star writers

Among the three, the Star has distinguished itself in that three of its writers have used their column and article space to vaunt the fundraising projects of Ukraine’s extreme-right parties and militias and the Ukraine army. These are the forces which have been shelling towns and cities in eastern Ukraine and otherwise committing countless war crimes for the better part of the past year.

I raised a hue about the fundraising in an article dated January 30. It was published in CounterPunch and Rabble.ca, drawing attention to two articles in the preceding six weeks, including one by seasoned Star Foreign Affairs Reporter Olivia Ward, which promoted pro-war fundraising. I accused the Star of “running with the extreme right in Ukraine”.

Earlier, on December 29, I published a letter responding to a December 23 article by Star writer Tanya Talaga which first introduced Star readers to ‘Patriot Defense. Its campaign, I explained, funds ‘first aid’ kits and training “being provided to members of the special Battalions, the National Guard, the Army and the Border Service and other security agencies. We are working together with Ukraine’s Ministry of Defence”. Note the “working together” language indicating this is a straight-up effort of the rightist battalions (which tolerate Ukraine’s elected institutions at the best of times and are known to threaten to overthrow them if the extreme right is not given its political way). I complained to the writer and to the Star editors, to no avail.

Counterpunch and Rabble.ca are widely read, so I thought it safe to assume that my January 30 article came to the attention of the Star‘s editors, if not its writers. In point of fact, for the past year, I have sent many e-mails and copies of articles to Star editors and columnists, pointing out the newspaper’s one-sided and simplistic ‘blame Russia’ interpretations of events in Ukraine.

So how did the Star respond to my January 30 article? Why, it came back with two more fundraising appeals!

On January 31, it published an article promoting a stage play in Toronto which is raising funds for the ‘Patriot Defense’ fundraising campaign of extremist battalions. Star writer Leslie Ferenc provided a description of the play and the seemingly noble and heroic aims of ‘Patriot Defense’. She cited the playwright’s description of the origin of the political conflict and war in Ukraine as “an atrocity against humanity which became a full-blown Russian invasion”.

On Saturday, February 7, the Star published a front-page article by Olivia Ward which advocates fundraising for ‘SOS Army’ in Ukraine. This outfit has been providing arms and equipment to the Ukraine army, to the Ukrainian National Guard (which is largely composed of volunteers from the extremist parties in Ukraine), and to the battalions that are the militias of the extreme right.

The most shocking part of the Olivia Ward riposte is that among the items funded by ‘SOS Army‘ is technology for improved artillery sighting.

The Ukraine army and militias have been conducting war crimes against the civilians of eastern Ukraine during the past nine months through indiscriminate artillery and rocket attacks against towns and cities. These are the war crimes of which the mainstream media dares not speak or write. The crimes have included the use of cluster weapons, as documented by the New York Times, by Human Rights Watch and, most recently, by the observer mission in Ukraine of the Organisation for Security and Cooperation in Europe.

Human Rights Watch has been obliged to speak out a second time against the use of cluster weapons because it was ignored by Kyiv the first time. That was in October, when the rights agency and the Times published separate investigations, each concluding that Kyiv is using cluster weapons. Human Rights Watch returned to the subject on February 4, 2015 because, it says, the Ukraine government failed to explain itself back in October and, worse, continues to use the weapons. Cluster weapons are banned in an international treaty, but Ukraine and the United States are among the countries that have refused to sign it. (Canada has signed the treaty but has failed to adopt an implementation process. Treaty statuses by country here.)

A Ukrainian language blog report encourages financial donations to ‘SOS Army’ by describing the benefits of more accurate artillery shelling. “For the price of a few sleepless nights, a computer technology team created an artillery sighting calculator that allows to quickly calculate and fire. Ballistic tables for all types of weapons help our gunners immediately calculate and adjust their shooting, dramatically improving their accuracy and avoiding mistakes.

“Fighters in the front are very pleased to no longer lug around bulky books, heavy iron plates and old topographic maps.”

It’s hard to know what “mistakes” this promotion material is citing. There have been way too many—tens of thousands—of artillery strikes in eastern Ukraine in the past nine months on houses, apartment buildings, workplaces, buses, hospitals, schools and kindergartens, among other locations, to believe for a nanosecond that any of these are cases of “mistakes”.

Another improvement for artillery against enemy fighters, not to speak of civilians and infrastructure, is provided by drone technology. Here too, SOS Army fundraising helps to equip the Ukraine army, not to speak of fascist paramilitary battalions. Here is a YouTube video promoting that effort.

And for a donation to ‘SOS Army’, you, too, can have your very own t-shirt carrying the stirring message, ‘Putin is a fucker’.

The blog report claims that SOS Army is a registered charitable foundation in the United States, United Kingdom and Spain.

So let’s pause here to see if we have this right. Canada’s largest newspaper, the only one still known to employ many writers and columnists with liberal and socially progressive views, is somehow caught up in fundraising for the armed forces of a neo-conservative government in Ukraine and its allied fascist extremists, who are bombing and shelling civilians in the east of the country. How could this be?

Sadly, the direction comes from the top. The Toronto Star has vigorously editorialized in favour of the war–oops, pardon me, I should say the ‘Anti-Terrorist Operation’, as Kyiv calls it—in eastern Ukraine since it was launched last April. No dissenting voice from that course is permitted in the newspaper’s pages. Its fundraising pitches on behalf of the war date back to at least September 11 of last year when the right-wing Ukrainian Canadian Congress (UCC) staged a gala fundraising event featuring Prime Minister Stephen Harper and professional hockey legend Wayne Gretzky. The Star wrote a glowing review of that event (timed on the anniversary of the world’s most publicized terrorist attack, and I don’t mean Hiroshima or Nagasaki). It took place only a few weeks after the Star ignored the news, reported on the CBC and some other mainstream outlets, of the UCC-organized Ukraine Independence Day event in Toronto that was attended by a federal cabinet minister and the premier of the province. It prominently featured a fundraising booth of the Right Sector fascist paramilitaries of Ukraine.

The latest Star editorial gives voice to the continued war course, saying, “Russian President Vladimir Putin has been the aggressor all along and, if this latest effort at peace fails, it’s important that he pay an escalating price for his deadly bellicosity.” But it goes further than sanctions by holding out the option of military escalation:

In the run-up to the latest round of peace talks, both U.S. President Barack Obama and Prime Minister Stephen Harper held open the possibility of supplying Ukraine with high-tech defensive weapons. That option requires further analysis given that key allies, including Merkel and France’s President François Hollande, remain opposed.

But it may soon prove necessary if Putin remains immune to arguments based on reason, economic pressure, and simple decency.

It is shocking to think that the ideological heirs in today’s Ukraine of the dark forces of Nazi Germany and other fascist regimes of that era are today’s heroes in the pages of the likes of the Toronto Star.[1] All the more shocking when one considers that NATO’s threats and escalations in eastern Europe raise the nightmare specter of a horror some may mistakenly believe no longer haunts humanity—nuclear war.

There is an urgency in Canada as well as in other NATO countries of seizing the occasion of the ceasefire in Ukraine to promote more discussion and debate about the high stakes in the Ukraine war. Antiwar protest is needed. Indeed, a wholesale rejuvenation of an antiwar movement is in order, including to oppose the economic sanctions against Russia. Sanctions serve to set the stage for escalating military threats.

Following the encouraging victory of the Syriza Party in the recent Greek election, and with the climate emergency becoming ever more urgent, this is not the time to be leaving the destiny of the Earth in the hands of crazed warmongers.

Roger Annis is a frequent writer on the war in Ukraine. He is an editor of the website New Cold War: Ukraine and beyond. The website publishes daily news and analysis by its editors and contributors and it reprints articles from other sources. This article first appeared in Counterpunch on Feb. 20, 2015.