“We don’t want another Lac Megantic.” 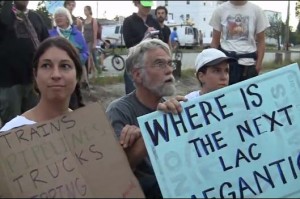 Three oil-train protesters are arrested while sitting on Pan AM Railway’s line in Lewiston-Auburn, Maine on August 28, 2013

AUBURN, MAINE — The way Jessie Dowling sees it, getting arrested is the very least she can do. “We need to put our bodies on the line,” the 32-year-old Unity woman said, just before being led into a police van for the short ride to jail. “We don’t want another Lac-Megantic.”

And there, in one simple sentence, was the thrust of the event. Dowling was one of three people arrested Wednesday as more than 100 people showed up in Auburn to protest the transportation of crude oil by rail.

The scene of their protest? The railroad tracks near Denny’s on Court Street, a site they say is one of many across Maine where a disaster could strike at any time. “The tracks have not been upgraded,” said a 68-year-old grandmother who called herself Andy, “and they’re bringing more and more oil through Maine, through heavily populated areas.”

The protest was organized by 350 Maine and Maine Earth First!, the environmental groups that blockaded an oil train in Fairfield in June. The groups are calling for a moratorium on the transport of the same oil product being transported when a train crashed and exploded in Lac-Megantic, Quebec, last month and killed close to 50 people.

“What if that were to happen around here?” said protester Ed Bonenfant of Randolph. “It’s not just a danger to human life, it’s a danger to the environment.” 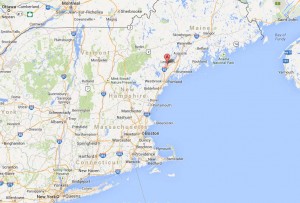 Lac Mégantic, Quebec is east of Sherbrooke. The ill-fated MM&A Railway line runs between Montreal and Saint John, New Brunswick. The alternative oil-train corridor to Saint John runs south from Montreal via CP Rail to Albany, New York, then north to Maine and New Brunswick on Pan Am Railway and NB Southern Railway (owned by the Irving conglomerate)

Shortly after 5 p.m., the groups gathered at Great Falls Plaza to prepare for the event. There were young people and old people, men and women. Most were veterans of protest. There were no signs of nervousness or second thoughts as they began the march up Pleasant Street hill toward the railroad tracks.

“A few of you are going to be arrested,” said Jim Freeman, of Earth First!. “Good luck, everybody. Love ya.”

Freeman led the group to the railroad tracks near Denny’s. Nobody was nervous, he said, because they believe in their cause. For the most part, they knew what to expect. The aim was to get their message across to as many people as possible. “We’ve been doing this for a long time,” he said.

Along the tracks between Denny’s and the Auburn Public Library, it became apparent at once that police knew about this planned protest and they were ready. As the protesters huddled, unfurling a massive swatch of black fabric meant to look like an oil spill, nearly a dozen police officers watched. They kept their distance. The officers were only there, they said, to keep laws from being broken. “We’re here mostly to enforce criminal trespass laws,” Auburn Lt. Tim Cougle said.

For the next hour, there was shouting and honking horns. The press swarmed like black flies and the police presence grew. All according to plan, as far as the protest groups were concerned. With afternoon commuters gawking and people passing by to see what the fracas was about, Earth First! was able to hand out informational packets and speak with people who wanted to learn more.

“What is this?” said Doris Cobb, who had just pulled into the Denny’s parking lot. “I was trying to read the signs, but there were people in my way. I thought something bad had happened.”

If her view had not been obstructed, she would have read a rich variety of signs. T-shirts, too. “Assert local control,” several signs read. “Trains for people, not for oil,” stated another, and “Oil trains derail life.”

A protester spotted Doris Cobb with a look of bewilderment on her face. “Would you like some information about all this?” the protester asked. “Yes,” said Cobb. “I would.”

The two got to talking and information was shared. Which is exactly the idea, according to those who travel around the state — and well beyond Maine, if needed — to raise awareness. “It’s important,” Bob Guethlen said. “That’s why we’re here. We’re all in this together.”

Guethlen was there with his wife, Diane, down from the Moosehead Lake Region where they lived for a time off the grid. They are veterans of these types of events, meant to bring about change through peaceful (but sometimes loud) means.

But to get the message across, good people occasionally have to do bad things; bad, at least, in the eyes of the law.

Shortly after 6 p.m., Dowling, another woman and a lone man walked down the railroad tracks to the muffler shop. They had been warned by police to stay off the tracks, but they went, anyway. They sat down. They refused to budge.

“I’m giving you a warning,” said Auburn police Sgt. Gary Boulet. “You’re going to have to move off the tracks.”

There was no trace of hostility in the lieutenant’s voice. He and the other officers had been briefed earlier in the day. They knew they might have to arrest people, even if those people at least believed they were doing something good.

A few seconds later, it happened. Officers moved in. The trio on the tracks refused to move. There was the solemn snick of handcuffs clamping shut and it was official: They were under arrest on charges of criminal trespassing.

“No fracked oil!’ shouted Douglas Bowen Jr., a 67-year-old protester from Porter who was arrested.

Meghan LaSala, 27, of Portland, smiled serenely as a police officer guided her into the back of the windowless van. The arrests were about as anticlimactic as could be.

“This has been very cordial, in my experience,” said Will Neils, a man serving as a liaison between police and the protesters. “I expect nothing less from law enforcement. These are Maine officers and this is all about Maine.”

The three were booked at the Androscoggin County Jail. They were later released on $300 bail. The protesters came to be noticed and they were.

“I don’t know anything about trains,” said one woman who lived nearby, “other than the fact that they annoy me when they go by in the middle of the night.”

One of the Earth First! members explained to her the dangers of crude oil. Trains running through Maine carry it from the Bakken oil fields of North Dakota, the protester said. Bakken oil is “fracked” — extracted by blasting a high-pressure, toxic cocktail deep into the ground to release the oil from shale rock, polluting air and water in surrounding communities, the activist said.

The two groups are calling on communities to perform citizen inspections of train tracks throughout the state. Betsy Catlin, who was arrested at the June blockade in Fairfield said, “Community inspections are necessary. Both companies, and state and federal governments have failed to do critical track maintenance to lower the risks of derailments.”

For the grandmother who called herself Andy, it was time to go home, regroup and wait for the next assignment. She’s been at it since 2000 and has no plan to stop. Two years ago, she was arrested in front of the White House while protesting climate issues.

“And you know what?” she said. “My grandkids were really proud of me. That’s part of what keeps me at this. I made a promise to my first grandchild that there would still be polar bears living in the Arctic when she grows up. I plan to keep going with this for a very long time.”