The hushed-up Hitler Factor in Ukraine 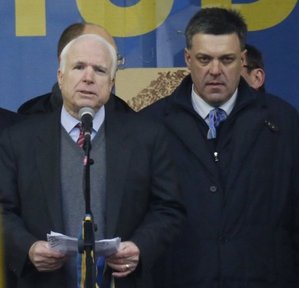 Behind the Ukraine crisis is a revision of World War II history that seeks to honor eastern European collaborators with Hitler and the Holocaust by repackaging these rightists as anti-Soviet heroes, a reality shielded from the U.S. public, as Dovid Katz explains.

Would America support any type of Hitlerism in the course of the State Department’s effort to turn the anti-Russian political classes of Eastern Europe into paragons of PR perfection that may not be criticized, howsoever mildly?

It was frankly disconcerting to see Sen. John McCain, R-Arizona, embracing the leader of Ukraine’s far right, anti-Semitic, pro-fascist Svoboda party last December. It was disturbing to learn of the neo-Nazi elements that provided the “muscle” for the actual Maidan takeover last February (BBC’s Newsnight was among the few major Western outlets to dare cover that openly).

Most disturbing of all has been the mainstream Western media’s almost Soviet-grade wall somehow erected against critical mention of the far-right component of Ukraine’s 2014 history, rendering any such thought as worthy of ridicule on New York Times opinion pages last spring.

Most hilarious was the Times’s May 2014 publication of an (obviously ghost-written, State Department-scripted) op-ed by Ukrainian  presidential candidate Yulia V. Tymoshenko which quotes Churchill writing to Roosevelt, “Give us the tools, as we will finish the job,” rumbling on about “the just and open democracy that is America’s greatest bequest to the world.”

This, from the far right politician who had shortly before that expressed genocidal musings for the millions of Russian-speaking citizens of her country, and who was, during her tenure as prime minister, a prime devotee of the wartime fascist leader Stepan Bandera, whose organization slaughtered tens of thousands (many historians put it at hundreds of thousands) of Polish and Jewish civilians based on ethnicity, in the Aryanist drive for an ethnically pure state precisely on the Nazi model.

It was therefore refreshing to read in last Saturday’s Times a report that had, albeit buried near the end, a single line informing readers that “One [militia active in the Kiev government’s military campaign] known as Azov, which took over the village of Marinka, flies a neo-Nazi symbol resembling a Swastika as its flag.” By contrast, London’s right-of-center Daily Telegraph ran a whole report Monday titled “The neo-Nazi brigade fighting pro-Russian separatists,” rightly including the observation that the neo-Nazi forces being used by the Ukrainian government to do military heavy lifting  “should send a shiver down Europe’s spine.”

This goes to the heart of what is being kept from so many Western, and especially American readers. Putin — for all his authoritarianism, anti-democratic bent and revanchism — is not the cause of the Ukrainian conundrum (though he is certainly exploiting it). There is a genuine divide in Ukraine between a nationalist-dominated west and a Russian-speaking east.

Anybody who has traveled the country will tell you that these “Russians” in the east, and wherever else they are to be found, would much rather be living in a European Union-type country than in a Russia-type country. What then is the problem? They do not want to live in an ultranationalist-dominated state that is anti-Russian in a 1930s Aryanesque sense of ethnically and linguistically pure Ukrainism. They much prefer the Russia-model state to that.

Now those anti-racist values, including the revering of the Anglo-American-Soviet alliance that brought down Hitler, and the disdain of societies founded on models of racist purity, are in fact also American values. But that affinity between Western values and the easterners would never even be guessed at in the avalanche of  Cold War II newsfeed coming our way.

Incidentally, some Western reports that caricature the Putinist press’s use of the word “fascists” for Ukrainian nationalists don’t appreciate the colloquial Russian usage where it refers not necessarily to swastika-wielding thugs but even to high society that holds in esteem the likes of Bandera and other World War II-era Nazist fascists as supposed mythical “freedom fighters” to be revered today by the state, in street names, statues, museums, and more.

That is not to say that America’s allies among the western Ukrainian nationalists are all pro-fascist. They are not. But there are two salient issues that go beyond Ukraine and cover all of “anti-Russian” Eastern Europe, particularly the new member states of NATO and the EU.

The first is casual acceptance of neo-Nazi elements, symbolism and ideology as part of any kind of supposedly centrist mainstream. In Latvia and Estonia, this is exemplified by tacit (or not so tacit) state support for honors for those countries’ Waffen SS divisions. In Lithuania, it can be manifest in state-sponsored shrines to the Lithuanian Activist Front (LAF) killers who unleashed the Holocaust on Jewish neighbors before the first German soldiers had quite arrived.

But there is a second issue that is much deeper, and has nothing to do with these more ostentatious kinds of Nazi worship. That issue is history.

While World War II is indeed “history” for the West, it is very much part of Now in Eastern Europe. State-sponsored institutions in the three Baltic countries, Lithuania, Latvia and Estonia, especially, and also at times in Croatia, Romania and elsewhere have invested a fortune in a kind of Holocaust revisionism that would whitewash their own nationalists’ collaboration with Hitler and turn the Soviet Union into the real Hitler.

Known as “Double Genocide,” it posits the absolute theoretical equality of Nazi and Soviet crimes. Its constitution is the 2008 “Prague Declaration,” which most Americans have never heard of, that sports the word “same” five times in reference to Nazi and Soviet crimes. Even fewer Americans know that one of its demands, that the world accept a unitary mix-and-match day of remembrance for Nazi and Soviet victims, was snuck under the radar into last June’s congressional military appropriations bill.

The issue across the board is the choice made by nationalist elites in Eastern Europe to construct national myths not on the merits of a country’s great artists, poets, thinkers and genuine freedom fighters, but all too often, on the basis of Nazi collaborators whose claim to fame is that they were also “anti-Soviet patriots.”

The fact of the matter is that virtually all of Hitler’s collaborators in Eastern Europe were “anti-Soviet.” In fact, the Soviet Union was the only power putting up resistance to Hitler in Eastern Europe. If the Soviets had not pushed the Nazi armies back by the spring of 1944, at huge sacrifice to all the Soviet peoples, there would have been no D-Day or opening of a Western front.

Whether it is hero-worship of Hungary’s Miklós Horthy, leaders of Croatia’s Hitlerist Ustasha, the Nazis’ Waffen SS divisions in Latvia and Estonia, or the likes of Ukraine’s Bandera and his OUN and UPA, and the Waffen SS, it is an offense to Western values that a NATO or EU state, or NATO/EU-aspiring state, would disburse state funds on the distortion of history, obfuscation of the Holocaust and construction of societies that admire the worst of history’s racists.

To do so quite simply implies that all the minority citizens they butchered, or whose butchering they supported, were quite unworthy of continued existence. Incidentally, all these countries have real heroes from that darkest moment in their history: those (often the simplest of people) who just did the right thing and risked all to rescue a neighbor from the Nazist establishment collaborationist leadership of their own nationalists.

The trend reached an unseemly highpoint in 2012, when the Lithuanian government financed the repatriation from Putnam, Connecticut, to Lithuania of the remains of the 1941 Nazi puppet prime minister Juozas Ambrazevičius Brazaitis, who had personally signed documents confirming Nazi orders first, for Jewish citizens of his city, Kaunas, to be sent to a concentration camp (it was actually a mass murder site), and a few weeks later, for the remainder to be incarcerated in a ghetto within four weeks.

Instead of politely protesting, the American embassy in Vilnius helped camouflage the event with a symposium on the war and the Holocaust that did not even mention the reburial underway.

According to some in State Department circles, the Obama administration, shaken by criticism of its long-standing anti-neocon caution in Iraq and Syria, and rueful over Libya, has tried to show its muscle, and satisfy the contingent led by Robert Kagan and his wife, Victoria Nuland, now assistant secretary of state for European and Eurasian Affairs, with sheer one-sidedness over Ukraine.

That is the Ms. Nuland who was caught telling the U.S. ambassador to Ukraine “Fuck the EU,” which would have preferred peaceful, democratic change in Ukraine. She was also plotting which politician would emerge as prime minister in that nation in the worst neo-con tradition of organizing who will emerge as ruler after the next fixed case of foreign regime change.

In Ukraine, a negotiated solution could maintain the nation’s independence and freedom to join the EU but not the military alliance NATO that is the huge humiliation for Russia (a hostile military alliance coming right to more of its borders).

Any viable solution needs to take into account that it is a deeply divided country even in the absence of (ever-present) Putinist mischief. It therefore needs to also take into account the many millions of Russian speakers who oppose the racial chauvinism of some of the nationalist elite now in or close to the government, and who have very different ideas about Twentieth Century history.

That is the way forward, not the Cold War II nonsense of spreading the word that the westerners are pure angels and the easterners pure demons, not the neocon nonsense that America’s greatness depends on endless foreign military misadventures in regime change that lead to long , unpredictable, and uncontrollable cycles of violence.

That America shares with Russia the magnificent legacy of having in tandem brought down Hitler’s empire is a heritage worth invoking for building better understanding, not a fact to be buried in deference to the far-right revision of Holocaust history with which much of nationalist Eastern Europe is so obsessed.