Below is the text of a statement condemning Russia that was issued jointly by the United States, Britain, Germany and France on March 15. The four countries say it is “highly likely” that Russia staged a chemical poisoning in England on March 4 of two former Russian nationals now living in the country, Sergei Skripal and his daughter Yulia.

What evidence for the accusation do the four-countries provide? None. Instead, they string together impressions which do not even amount to circumstantial evidence. They say “there is no plausible alternative explanation”. They cite that Russia did not respond to Prime Minister Theresa May’s ultimatum late on March 12 that Russia furnish proof of its innocence of Britain’s accusations within 24 hours. And lastly, they cite an unnamed “pattern of earlier irresponsible Russian behavior”.

The 1997 Chemical Weapons Convention outlawed the use of chemical weapons. The Organisation for the Prohibition of Chemical Weapons (OPCW) was established to enforce the convention. The OPCW has a strict protocol for examining alleged violations. In this present case, Britain and now its three allies have declined to take their ‘evidence’ to the body, despite Russian government demands that Britain do so.

A 2013 report by the OPCW examined the class of chemical named by Britain as having poisoned the two individuals on March 4, 2018, so-called Novichoks. The report concluded, “Regarding new toxic chemicals not listed in the Annex on Chemicals but which may neverthe less pose a risk to the Convention, the SAB [Scientific Advisory Board] makes reference to “Novichoks”. The name “Novichok” is used in a publication of a former Soviet scientist who reported investigating a new class of nerve agents suitable for use as binary chemical weapons. The SAB states that it has insufficient information to comment on the existence or properties of ‘Novichoks’.”

A former chemical scientist named Vil Mirzanyanov who worked in the Soviet Union and now lives in the U.S. claims he developed ‘Novichoks’. He published a book in 2007 titled State Secrets: An Insider’s Chronicle of the Russian Chemical Weapons Program containing what the author claims to be the very formula for the mysterious chemical. In an interview on March 14, Mirzanyanov says he is convinced that the Russian government carried out the alleged March 4 attack in England. He told AFP that Sergei Skripal was no threat to Russia but the Kremlin could have killed him just to intimidate potential opponents.

Mirzanyanov also said that ‘Novichoks’ are “ten times” more powerful than the deadly VX nerve agent, the one that allegedly killed a North Korean diplomat in Singapore in 2017 (though not his attackers who allegedly handled the chemical). Somehow, Sergei Skripal and his daughter have survived the ‘Novichok’ attack on March 4.

In October 2017, the OPCW confirmed the destruction of the last of Russia’s chemical weapon stockpile in accordance with the 1997 convention. 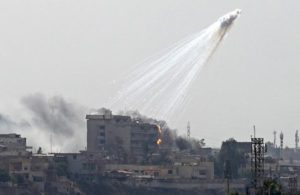 Chlorine and white phosphorus are not outlawed by the Chemical Weapons Convention, but their use in warfare is outlawed. Both chemicals burn the skin and lungs; they are not nerve gases. Chlorine is a less effective substance to use as a chemical weapon compared to nerve gases because chlorine dissipates in wind or rain. White phosphorus is a powder which is delivered by bombs or artillery shells.

The United States has routinely used two chemical weapons in Iraq, Syria and elsewhere—white phosphorus and artillery shells hardened with deleted uranium. The U.S. defends its use of white phosphorus by saying it is used to create “smokescreens”. U.S. Army Col. Ryan Dillon, a spokesperson for the U.S.-led forces in Iraq and Syria, told international media on June 9 that, “In accordance with the law of armed conflict, white phosphorus rounds are used for screening, obscuring and marking in a way that fully considers the possible incidental effects on civilians and civilian structures.”

The U.S. use of deleted uranium has been causing death and illness all the way back to the American War in Vietnam. (There, the U.S. also dropped massive quantities of other chemical weapons, notably napalm and Agent Orange.)

Human rights organisations such as Human Rights Watch and Amnesty International issued conditional protests in 2016 and 2017 of continued U.S. use of white phosphorus in Iraq. Amnesty International said on October 28, 2016, “We are urging Iraqi and coalition forces never to use white phosphorus in the vicinity of civilians. Even if civilians are not present at the time of its use, due to the residual risks they should not use airburst white phosphorus munitions unless it is absolutely necessary to achieve military objectives which cannot be accomplished through safer means.”

According to Wikipedia, 96 per cent of the world’s chemical weapons stockpiles have been destroyed by the year 2017. Conventional weapons, nuclear weapons, and chemical bombs and shells disguised as ‘conventional’ have seen no such decline.

A new study by U.S. authors and antiwar advocates Medea Benjamin and Nicholas Davies estimates that 2.4 million people in Iraq have died as a direct result of the catatrophic U.S. invasion of 2003. Britain, of course, was a full participant in that criminal enterprise. The numbers mean nothing to an imperialist world order seizing upon two injured people in a UK hospital to inflict more conflict and more war on the world’s peoples.

*  The ‘Novichok’ chemical weapon story is another Iraqi WMD scam, by Craig Murray, published on his website, March 14, 2018
*  The strange case of the Russian spy poisoning, by James O’Neill, published in Consortium News, March 13, 2018  (James O’Neill is a barrister and geopolitical analyst in Australia.)  Applying the principle of cui bono – who benefits? – to the case of Sergei Skripal might lead investigators away from the Kremlin as the prime suspect and towards Western intelligence agencies
*  Novichok – toxic questions about chemical at center of Skripal saga in Britain, including Russia’s UN-verified destruction of its entire chemical weapons capacity in 2017, RT, Mar 13, 2018
*  Russian to judgement, by Craig Murray, published on his website, Mar 13, 2018   (Craig Murray was British Ambassador to Uzbekistan from August 2002 to October 2004 and Rector of the University of Dundee from 2007 to 2010)

Statement of the United States, Britain, France and Germany

We, the leaders of France, Germany, the United States and the United Kingdom abhor the attack that took place against Sergei and Yulia Skripal in Salisbury, United Kingdom, on March 4, 2018. A British police officer who was also exposed in the attack remains seriously ill, and the lives of many innocent British citizens have been threatened. We express our sympathies to them all, and our admiration for the United Kingdom police and emergency services for their courageous response.

This use of a military-grade nerve agent, of a type developed by Russia, constitutes the first offensive use of a nerve agent in Europe since the Second World War. It is an assault on the United Kingdom’s sovereignty and any such use by a state party is a clear violation of the Chemical Weapons Convention and a breach of international law. It threatens the security of us all.

Russia should, in particular, provide full and complete disclosure of the Novichok program to the Organization for the Prohibition of Chemical Weapons (OPCW). Our concerns are also heightened against the background of a pattern of earlier irresponsible Russian behavior. We call on Russia to live up to its responsibilities as a member of the U.N. Security Council to uphold international peace and security.