The fossil fuel wars in British Columbia and Canada

The fossil fuel industry offensive in British Columbia and across Canada is proceeding relentlessly. This is a report from some of the key fronts of the fossil fuel wars. 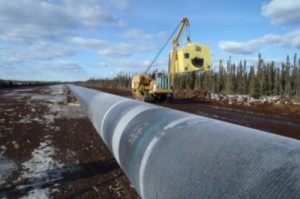 On Dec. 16, Kinder Morgan company made its official application to the National Energy Board for approval to build a $5.4 billion tar sands pipeline from Alberta to Vancouver harbour. The new line will use the path of its existing Trans Mountain Pipeline for part of the route, but it will diverge from that significantly in places, including in the final leg of the line into metropolitan Vancouver.

The population of British Columbia has risen four times since the original Trans Mountain pipeline was built in the 1950s. The new line will cross busy urban areas, seven provincial parks and 13 park reserves, including 500 rivers and streams. It will require expanded bulk-oil storage on the Vancouver harbourfront and increased berths for the estimated 35 tankers per month that will transport the line’s diluted bitumen to overseas markets.

Meanwhile, the National Energy Board yesterday made its much-anticipated ruling on Enbridge Inc’s proposed Northern Gateway tar sands line. This follows two years of study and public hearings by the agency. Surprise, the NEB recommends to the federal government that the project should proceed, subject to a series of “conditions” it has laid out. (See map of the proposed route.)

The Vancouver Observer today publishes some initial reactions in BC to the NEB decision.

Two very informative articles on the Alberta tar sands appeared last week in Postmedia and The Globe and Mail. Both detail the rising tensions between the industry and two First Nations in northern Alberta that have obtained perceived economic benefits but are being relentlessly squeezed by the ever-expanding ambitions of the industry. Those are the Fort McKay and Fort Chipewyan First Nations. Here is a map and here are the two articles:

* The dispute the entire oil industry is watching, by Kelly Cryderman,  The Globe and Mail, Dec. 14 2013
* Finding balance as worlds collide, by Marty Klinkenberg, Postmedia News, December 14, 2013. (This article is part five of a five-part series published by the Edmonton Journal in Nov-Dec 2013.)

The online publication Vancouver Observer is launching a one-year publishing project on the tar sands and is appealing for financial support. It’s the news outlet that broke the story last month of intense, federal government spying on the environmental movement conducted by CSIS (Canada’s FBI) and the RCMP.

A similar squeeze on First Nations is taking place in northern British Columbia over natural gas, albeit at an earlier stage. The lure of funding from natural gas fracking and the vast expansion plans coming from proposals for a liquefied natural gas industry on the northern coast are squeezing the First Nations in the fracking zone and all along the proposed pipeline routes. The proposed gas pipeline routes are proximate to Northern Gateway.

The message that I have received in several conversations with First Nations in the northeast gas zones is, ‘The environmental movement needs to become more active and outspoken. We need help. We’re under siege and we don’t have the power by ourselves to stop these fossil fuel projects. We need alternatives to a fossil fuel-based economy so that we have meaningful employment for young people and revenues that can fund education, health care and other social services that we need.’

Go to this web page and scroll down to see all the pipelines proposed to date in northern BC.

Tensions are rising over the decision of the British Columbia government to seek regulatory approval for a third dam on the Peace River, called Site C. The dam is being sold as needed for expanding urban needs for electricity. But it will be used directly or indirectly to serve expanded fossil fuel extraction and mining projects. First Nations in the region to be flooded and otherwise affected have divided opinions—some accept the project as a fait accompli, others are fighting it.

On Dec. 13, Transport Canada raided the offices of Irving Oil in Saint John, New Brunswick to find out what that company knew and what it did about the volatility of the oil from the vast Bakken field in North Dakota that it contracted to receive by rail beginning in 2012. Much of that oil was passing through Lac Mégantic, Quebec via the rail link between Montreal and Saint John (passing through the state of Maine). Irving operates Canada’s largest refinery at Saint John, close to the international border with Maine.

The CBC first reported the raid on Irving. The G&M reported on it Dec. 14. The story is being widely reported in Maine.

The Irving conglomerate is joining the rush to fracking. It is behind the widely-reported fracking conflict in Elsipogtog, New Brunswick by virtue of its hiring of the exploration company–SNW  Resources–whose work sparked the storm. Due to the boom in gas fracking in North America, Irving’s jointly-owned, liquefied natural gas import facility in Saint John presently stands idle.

Yesterday, the Toronto Star reported on its front page, “Cleaning up the millions of litres of crude swamping Lac-Mégantic is a mind-bogglingly complex task”. It’s an excellent, detailed article on the cleanup.

The federal government will, for the first time, designate crude oil a highly dangerous substance and introduce tougher safety and testing measures for shipping oil by rail, reports The Globe and Mail. Earlier this year, the newspaper broke the veil of secrecy and conspiracy by the oil and rail industries over the volatility of North Dakota oil.

Transport Canada has been ordered by Raitt to come up with an Emergency Response Assistance Plan for oil train shipments. The first railway ERAP in Canada was formulated for chlorine shipments after a derailment in Mississauga (Toronto region) in 1979 forced the evacuation of 220,000 people from their homes. Transport Canada has decided three times in the past decade against an ERAP for oil trains.

Following the disaster at Lac Mégantic, the message from the government and rail industry was denial. Train safety in Canada is top of the class, they said. Why, ‘we have a record of safe delivery of 99-point-whatever percent of shipments’. Oops. News reporting, particularly in the Globe, lifted the lid on that fable in the months following Lac Mégantic. Two oil train derailments in the center of Calgary in June and August and a spectacular oil train derailment outside of Edmonton in October didn’t help the rail industry’s and federal government’s arguments.

A latest expose is reported in the Vancouver Sun, showing that the federal government (Transport Canada) has consistently ignored its own audited safety warnings over rail and other shipments at least as far back as 2006.

Rail safety regulations in Canada and the U.S. have changed significantly over the past 20-30 years. From directly monitoring, reporting and regulating the railways’ performances, federal agencies now monitor the railways’ own reporting of their performance. They step in only when they perceive problems as reported by the railways or when disaster occurs.

My website contains extensive reporting by myself and other writers on the July 6 oil train disaster in Lac Mégantic.

A recent article in Socialist Worker (U.S.) provides some excellent historical backdrop to the struggles of Indigenous peoples for sovereign control of their lands and air and water: ‘First Nations fight against the frackers’.

The issue of the North Dakota oil volatility is coming under scrutiny in Ontario and Quebec, as well, as a result of Enbridge Inc’s proposal to reverse the flow of its Line 9 pipeline. The line would carry both Bakken oil and diluted tar sands bitumen across southern Ontario to Montreal. It connects at Sarnia, Ontario to Enbridge’s network from Alberta and across the U.S. Midwest.

Coal shipments from British Columbia and the paving over of farmland

Delta is the latest municipality in the Vancouver region to vote in favour of a full health and environmental assessment of the proposal to build a new coal export terminal at Fraser Surrey Docks on the Fraser River. On Dec. 16, it voted in favour of a comprehensive review.

The resolution approved by Delta city council and the supporting documentation is doubly significant. It calls for a comprehensive review of all coal operations in the Lower Mainland, to be undertaken by a broad, inter-agency committee. This would look more broadly than the Fraser Surrey Docks proposal alone. It would review (my emphasis—RA) all coal operations, and it urges, “THAT recommendations from the independent interagency review committee be forwarded to Port Metro Vancouver for implementation and action, including but not limited to, the comprehensive independent assessment of the health and environmental impacts associated with the handling and transportation of coal.” In other words, all of the activity of Port Metro Vancouver (PVM) should be reviewed.

According to a city councilor of Delta to whom I spoke today, there are between 300-400 train movements in the Lower Mainland per week, including 40 or so to the Roberts Bank coal and container terminal in Delta. That number includes 75-150 CP trains and 200-300 CN trains, as well as BNSF trains coming up from the U.S.

PVM is a federal government agency that favours Fraser Surrey Docks. It is trying to evade a full, comprehensive review of FSD. It commissioned its own assessment of the project, conducted by SNC Lavalin. Surprise, this gave the project a green light.

Those opposing the project as it stands include the Greater Vancouver Regional District, a growing number of the adjacent municipalities, and both public health boards in the Vancouver region.

Delta BC is exceptionally affected by the vast expansion over the past decade of train, auto and ship traffic in the Vancouver region. It sits at the crossroads of so much of that traffic. Much of its land space is the exceptionally rich agricultural land of the Fraser River Delta.

The federal and provincial governments have spent billions of dollars in the region to build new highways and highway bridges and expand railway lines and ports. Commercial and retail space has also grown significantly, much of it on agricultural land.

A column in yesterday’s Vancouver Sun by Pete McMartin, the first of a series, voices the serious concern of Richmond mayor Malcolm Brodie over the ongoing industrialization of the Vancouver region (facilitated by the cozy ties of the region’s planners and decision-makers to the fossil fuel industry). McMartin writes, “Richmond, like all the municipalities along the lower Fraser, finds itself faced with what seems like a well-choreographed sequence of events, seemingly decided years ago and without their significant input, that will utterly change the nature of their municipalities.”

Richmond is one of the Fraser Delta municipalities directly threatened by rising ocean levels caused by the increased extraction and burning of fossil fuels. Somehow, Richmond and its neighbouring municipalities are going to have to find billions (yes, billions) of dollars in the near future to raise the levels of the dikes that protect them from the rising oceans.

The McMartin column is alarmingly titled, ‘Who’ll pay to dike the Pacific?

A recent article by U.S. writer Dahr Jamail examines dire consequences for human society and the human race that leading scientists and economic forecasters hold out if the unbridled expansion of capitalism and its fossil fuel consumption continue. Naomi Klein recently wrote an overview with a similar theme, titled ‘How science is telling us to revolt’.

The evidence is overwhelming of the need to replace the madcap, limitless-growth capitalist order with a rational, planned society that can make a rapid transition to a new economy cognizant of the Earth’s ecological limits. The fight against Canada’s madcap fossil fuel industry owners and facilitators is a key front in that battle.

This article was first published in the Vancouver Observer. This is a slightly updated and revised version.