The false economy of Canada’s plundering of its forest resource 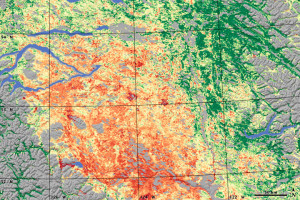 Climate change and environment writer Andrew Nikiforuk published an op-ed last month in the New York Times, on Nov. 17, which looked at a little-examined consequence of the Alberta tar sands–the destruction of forests in Alberta which the tar sands industry perpetrates as it tears up the earth to get at the ‘black gold’ below. Nikiforuk’s op-ed was titled, ‘A forest threatened by Keystone XL’, referring to that hotly-contested pipeline proposal that would deliver ever-more tar sands bitumen to upgraders and refineries in the southern U.S.

Nikiforuk is also a leading writer in documenting the destruction of northern forests being caused by global warming. His 2011 book ‘Empire of the Beetle’ examines how rising global temperatures have vastly expanded the destruction caused by the mountain pine beetle of western North America. All of western North America’s pine forests are being destroyed by the beetle because winter temperatures are no longer cold enough to keep its spread in check, as has previously been the case for millennia.

The Globe and Mail is publishing a series of articles that look at the changing economics of the forest industry in Canada. During the past 10 years, total employment in the industry has fallen dramatically, from app. 309,000 workers to 191,000. The decline is ongoing. Some of that decline is due to sharp reductions in paper demand and consumption. But a lot is also due to mechanization of paper mills and sawmills that greatly increases the productivity of each worker–and profits for the mill owners.

In other words, the paper and lumber industries are another example of the false claims that the ongoing vandalism aand plundering of Canada’s vast natural resources create “jobs” that can ensure the futures for workers and their communities. The opposite is the case. There are no good jobs on a dead planet. The forest industry, including its long-standing practice of clearcut logging, is taking society and its natural surroundings into a downward, dead-end spiral.

You can read the Globe and Mail article series here: