“When I came into the North West in July, the first of July 1884, I found the Indians suffering. I found the half-breeds [Métis] eating the rotten pork of the Hudson Bay Company and getting sick and weak every day. Although a half breed, and having no pretension to help the whites, I also paid attention to them. I saw they were deprived of responsible government, I saw that they were deprived of their public liberties…” – From Louis Riel’s final statement to his staged trial in Regina, July 31, 1885.

On Saturday, July 20, 2013, the Bell of Batoche was unveiled and formally restored to the Métis people of western Canada at the 128th gathering of the ‘Back to Batoche’ festival in Batoche, Saskatchewan. Several thousand people were on hand to witness the historic unveiling. The town sits on the South Saskatchewan River, north and east of the city of Saskatoon. 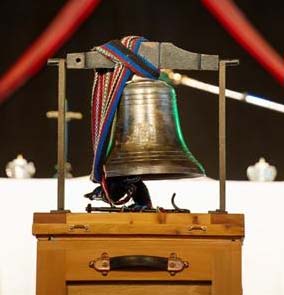 The Bell of Batoche

‘Back to Batoche’ is the annual festival that celebrates the history and culture of the Métis. They were the earliest non-Aboriginal settlers of western Canada who from the 17th century onward evolved as a people of mixed English, French and Indigenous ancestry. In the 2006 census of Canada, nearly 400,000 people self-identified as Métis. Most live in the three Prairie provinces, but there are also populations in other provinces and in the northern, midwest United States. The languages most commonly spoken by Métis are French and Michif.

The bell is one of the most important historic symbols for the Métis people, considered sacred by many. It hung in the church at Batoche. The town served as the de facto capital of the North-West Rebellion of the allied Métis and Aboriginal peoples in 1884-85. They were fighting for land rights and national recognition in the face of an invasion of agricultural settlers and capitalist interests from eastern Canada.

The last significant battle of the Rebellion was fought at Batoche from May 9 to 12, 1885. The nascent Canadian army defeated the Métis forces led by Gabriel Dumont and Louis Riel. The bell itself bears the scars of that battle–today it has several, visible indentations caused by the rifles or gattling guns (early machine guns) of the Canadian forces.

The bell was taken back to Ontario as a war trophy. It sat for decades in a Canadian Legion (war veterans) hall in the town of Millbrook. It was recovered clandestinely by Métis rights activists in 1991 and kept in hiding until three days ago. One of those activists was the former head of the Manitoba Métis Federation, Billyjo Delaronde. At the festival and unveiling, he told the story of the repatriation.

For the first time in more than a century, the bell rang over Batoche. It will now go on display for the time being at the St. Boniface Museum, a national park located in the French Canadian/Métis district of Winnipeg called St. Boniface.

History of the Métis rebellions

You can read about the 1884-85 Rebellion and the earlier, Métis rebellion in 1869 in the territory that became the province of Manitoba, including their legal and constitutional repercussions to this day, in a Rabble article from earlier this year. And there is an excellent, one-hour CBC Radio documentary broadcast several months ago on the history of the Métis people, titled ‘Riel’s Revenge.’

The Métis /Aboriginal North-West Rebellion of 1884/85 is immortalized in a 1984 song titled ‘Maria’s Place’, composed and performed by Saskatchewan singer/songwriter Connie Kaldor. I am unable to locate an online source to listen to the song. Enclosed below are the lyrics.

The song title is inspired by author and Indigenous rights activist Maria Campbell. In 1973, she published an autobiography about growing up Métis titled ‘Halfbreed’. Later, she purchased and settled on a part of the land where the Battle of Batoche was fought so that it would remain forever in the Métis heritage.

Following the defeat in 1885, Gabriel Dumont went into exile in the U.S. He eventually returned to Saskatchewan. He died in 1906 and is buried at Batoche.

Louis Riel surrendered to authorities three days after the Battle of Batoche. He was imprisoned and tried in Regina, found guilty of treason and hung on November 16, 1885. Today, he is recognized by most Canadians as a hero and a founder of the country. Each year on the third Monday of February, the province of Manitoba recognizes ‘Louis Riel Day’ as an official holiday. 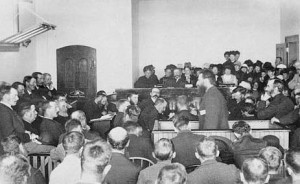 Louis Riel speaking to the jury at his trial in Regina, July 1885

The legal and constitutional authority by which the Canadian government and military tried Riel in the territory that later became the province of Saskatchewan was entirely specious. Earlier in Manitoba, he was elected three times to the Canadian Parliament. Riel’s final statement to his staged trial, on July 31, 1885, is here.

One of those present at Batoche was Riel’s secretary, a 23-year old former student from the University of Toronto named William Henry Jackson. He joined his family in moving to Prince Albert, Saskatchewan. He became a secretary of a local union of farmers. He met Riel in Prince Albert in the summer of 1884 and became his secretary.

Jackson was captured at Batoche and detained. He escaped to the United States where he lived out his life. He changed his name to Honoré Joseph Jaxon in honour of the Métis cause and became a union organizer for several decades in Chicago. He preserved a written collection of the 1885 rebellion. Sadly, most of that archive was lost over the years, including the large collection he still possessed when he died in New York City in 1952.

Honoré Jaxon’s fascinating life story is told by Donald Smith, professor of history at the University of Calgary, in his 2007 book ‘Prairie Visionary.’

The Canadian Union of Public Employees, Saskatchewan division, published an informative, 32-page booklet several years ago that describes Batoche, the surrounding geography, and the history of the Métis people, including the rebellions of 1869 and 1884/85. You can read that here.

The remarkable story of how the Bell of Batoche was recovered in 1991 by Billyjo Delaronde and eventually brought home to Batoche, Sakatchewan on July 20, 2013 is told in a two-part, 18-minute report on the Aboriginal Peoples Television Network. Watch it here.

Maria’s Place (Batoche)
Words and music by Connie Kaldor, 1984, as published on her official website

Chorus:
Well they’ve chased us once [1869] And they’ll chase us again
Do you remember Gabriel
“Oui je me souviens”
We have called on Riel
He will speak to us now
“Will you fight for the land that is yours, are you men?”
For the red coats are coming
Well this time they must take with guns
What once they took with a pen

On the South Saskatchewan River
In small little holes, the red coats lay hiding
With only the queen on their side
Riel, he has God and a vision
But it won’t fill their guns
So they know in their hearts
That it won’t turn the tide

Chorus:
So you run Gabriel
For your vision lies hanging
From a rope, in a jail, in an English town

But you can hear Gabriel and Riel even yet
They are whispering, “You can win what once was lost”
You can hear it in the rustle of the poplar leaves
At the bend in the river
They call
Batoche

This article was first published on Rabble.ca. You can reach Roger Annis at [email protected]