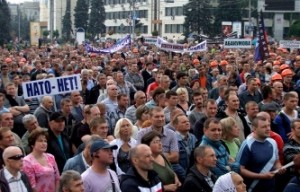 The Donetsk People’s Republic (DPR) has begun recruiting to a Miners’ Division. So far, 500 people are claimed to have signed up. The total number of troops in the unit is planned to reach 10,000.

“The formation has begun in Donetsk of a division made up of miners who have taken a decision to defend their homes and families,” the Prime Minister of the Republic Aleksandr Boroday told Itar-Tass. “The number of personnel in the Miners’ Division is planned to reach 10,000.”

Boroday also reported that the DPR had begun forming international brigades for the struggle against fascism.

On June 18, coal enterprise workers staged an anti-war march in Donetsk, with around 10,000 people taking part. At a rally held during the action, Deputy Minister of the Coal Industry of the DPR Konstantin Kuznetsov declared that Donbass miners would take up arms if the Kiev authorities did not halt military operations in the region within two days.

Meanwhile, Ukrainian President Petro Poroshenko visited a camp of the National Guard, where he promised to sign a decree shortly ordering a temporary cease-fire in the east. According to information from the Ukrainian Interior Ministry, this is being done in order to allow militia fighters to lay down their weapons. Those who refuse “will be annihilated”, the ministry has stated.