Betrayed by the United States and the U.S. alliance with fellow NATO member Turkey, Syrian Kurds are turning to the Syrian and Russian governments for a political settlement of the war in that country. This opens the door to a lasting peace and acceleration of national reconstruction.

The leaders of Syria and the Kurdish-led Syrian Democratic Forces have agreed to negotiate a political settlement of their longstanding conflict. The news of their July 26 meeting in Damascus is reported in Press TV, July 28, 2018  and in Reuters, July 28, 2018. 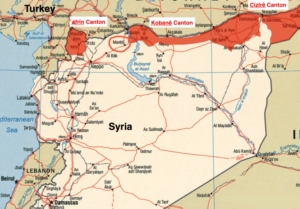 Key to talks will be devolution of autonomous powers to Kurdish-populated regions in Syria in the northeast (Afrin in northern Aleppo governate) and northwest (Hasakah governate). Talks are ongoing simultaneously among Syrians to revise the country’s constitution.

Side-by-side with planned talks is the ‘Astana’ peace process, named after the capital city of Kazakhstan. It brings together the Syrian government and its fractured political opposition with the governments of Russia, Turkey and Iran as well as UN officials acting as guarantors. The next round of Astana process talks is taking place in Sochi, Russia on July 30 and 31. The United States has declined the invitation to attend as an observer.[1]

Also ongoing are talks hosted by the United Nations Office in Geneva. 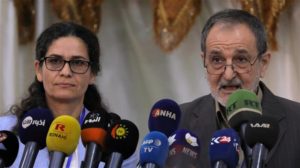 Ilham Ahmed (R) and Riad Darar are co-chairs of the Syrian Democratic Council (photo by Reuters on July 16, 2018)

In engaging with talks with Syria, Kurdish leaders are reacting to multiple betrayals by the United States of Kurdish hopes that the U.S. would curb Turkey’s aggressions against Kurds in Turkey, Syria and Iran. Kurdish leaders like to tell the world they are in a military alliance with the U.S. in a fight against ISIS and they hope the alliance is durable. But those hopes (naïve hopes, many observers have argued) have dimmed if not disappeared. The Kurdish news service Rudaw in Iraqi Kurdistan explains on July 30, “Syrian Kurds are hopeful that more cooperation with the Assad regime [sic] can undermine the presence of Turkish forces.”

The breakthrough in talks with Kurdish forces occurs as Syrian armed forces make large advances in recovering sovereignty over areas of the country that have been controlled by Western-backed paramilitaries. Writing two weeks ago about the prospects for the Syrian government to end to the seven year-long war in the country, U.S. writer Patrick Lawrence explained, “It would be hard to overstate the significance of this outcome. Apart from bringing the most tragic conflict of the post–Cold War decades to an end, the larger consequences of a peace achieved in this way — political, diplomatic, strategic — are many.”

“To take the impending outcome as a victory merely for Bashar al–Assad’s political survival — as press reports and Washington officials encourage us to do — is too narrow a view and misses the essential point: This [Syrian government victory] will be an advance for national sovereignty, non-intervention, international law, and secular government…” 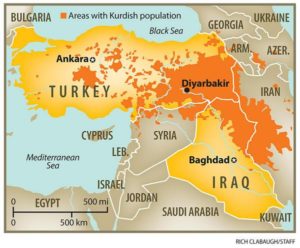 Kurds number some 29 million in four countries in the Middle East–Syria, Iraq, Iran and Turkey. Of those, two million reside in Syria and 18 million reside in Turkey (a country of 80 million). Kurds are the largest nationality in the world without a homeland.

The agreement between Damascus and Syrian Kurds is a blow to the U.S./EU/Turkey/Israel/Saudi axis that has sought the violent overthrow of the Syrian government. It will have large consequences in Turkey proper. Kurds there are also seeking autonomy but have endured harsh repression and extreme violence since 2015 at the hands of the authoritarian regime of President Recep Tayyip Erdogan.

Of particular note is the boost that this news from Syria may give to the historic struggle of the Palestinian people. They, too, are engaged in a life and death struggle to achieve an autonomous homeland (whose preferred outcome is a democratic and secular Israel/Palestine).

Prospects for peace in Syria

The breakthrough between the Syrian government and Syrian Kurds is not a surprise for those following the news closely. There has been much cooperation during the past seven years between the two sides in battling ISIS and other right-wing paramilitaries, particularly in the past 18 months. A July 27, 2018 article by Agence France presse summarizes some of this. There have been on-again, off-again probes during the past several years towards negotiating a political settlement.

Military cooperation and political talks have taken place with the encouragement and diplomatic pressuring of Russia. Russia has gone so far as to draft a revised Syria constitution in 2017 for the consideration of Syria’s government and people.

All of this and more can be expected to accelerate. A political settlement in Syria is the only path towards peace for the country. It is also fundamental for the massive work of reconstruction of the country’s towns, cities and countryside. Only those blinded by anti-Russia prejudice if not anti-Slav racism could fail to welcome the prospects for this.

The Russian government recommends a political formula to Syrians–federalism and autonomous national rights–that has worked very well in Crimea since it voted in April 2014 to secede from Ukraine and affiliate to the Russian Federation.

Under Ukraine, there was only one official language in Crimea—Ukrainian. The region was an economic backwater. One of the first acts of the new Crimean government following secession from Ukraine was to declare three official languages—Russian, Ukrainian and Tatar.[2] Crimea is also undergoing economic expansion under Russia. This will accelerate as the new road and rail link to mainland Russia is completed at the end of 2018.

The political renewal of Syria and the reconstruction of its infrastructure will be a largely unreported story in the West, both by corporate media and by not-so alternative media. Genuine left-wing and antiwar forces have a responsibility to counter this media blackout.

The war waged in Syria for the past seven years has been supported by many leftists in the West—anarchists, the ‘International Socialists’ current, most of the splintered Trotskyist groups. Their effort now stands ever-more exposed and bereft of moral standing. The leftists call the Syria war a ‘revolution’, but this is a strange ‘revolution’, indeed, without a program or authoritative, recognized leaders.

The anti-Russia sections of the Western left could be contributing to the discussions aiming for Syria’s recovery and renewal and offer to Syrians their insight and expertise. Most importantly, they could be campaigning to end the economic and political sanctions and embargos by the Western powers against Syria and its people. Instead, they have the blood of the Syrian people on their hands due to their advocacy of the violent overthrow of the Syrian government. They have encouraged the violence and killing by the West’s regime-change war and its paramilitary legions and obstructed the creation of a broad antiwar movement.

This left has lost the moral authority comment on Syria. This also applies to their views on Russia. Progressive forces on each side of the Russia-West divide have much to learn from each other and offer. The world is facing burning issues of social equality, global warming, nuclear weapons proliferation and the NATO-driven arms race against Russia, China, Korea and Iran. Discussion and common work are desperately needed across the dividing lines erected by imperialism. But in the West, flawed and inaccurate portrayals of Russia are widespread on the left and in alternative media, terming Russia an ‘imperialist’ (or the equally nonsensical ‘sub-imperialist’) power[3], co-responsible for the new cold war arms race, guilty of carnage in Syria and guilty of interference if not downright intervention in Ukraine.

Palestinian rights activists will recognize the significance of what is taking place in Syria. With luck and effort, events in Syria will provide a moral and political boost to the struggle for Palestinian national rights and an end to the apartheid state of Israel.

A broad movement of solidarity is needed not only for the beleaguered people of Syria but also those of Turkey, Egypt, the Gulf states and, of course, Palestine. All of them are under attack by U.S.-led imperialism.

Western governments and media (along with many Western leftists) supporting regime change in Syria will be aghast at the new moves to peace in Syria. They will hope that the outside world will not notice. Progressive forces, on the other hand, must certainly take notice. In the West, we should redouble demands to lift sanctions and embargos against Syria. Western governments owe restitution and compensation for the regime change crimes of the past seven years. Progressives in the West should demand that these governments provide funding and resources for the massive reconstruction effort that is underway in Syria.

Ongoing news and analysis of developments in Syria will continue to appear on A Socialist In Canada website, including in the daily ‘World news headlines‘ page of the site. This informative report, for example, appears there: Why Syria’s Kurds are inclined to negotiate with Damascus, by Mohammad Bassiki, Al-Monitor, July 26, 2018.

Notes:
[1] Al Monitor explains in a July 30 report that Turkey says its participation in the Astana process will end if the Syrian government and its Russia supporter undertake a military offensive against the enclave of right-wing paramilitary forces in Idlib province. Al Monitor shrouds its article in the publication’s ongoing, conspiratorial claim that Russia and right-wing, NATO-member Turkey are moving toward a long-term political and military alliance.
[2] Census numbers vary for Crimea. Its population is approximately 2.2 million. The ethnic and language breakdown is approximately 70 per cent Russian, 16 per cent Ukrainian and 12 per cent Tatar.
[3] For the contrary argument to that of the leftists, see The myth of ‘Russian imperialism’: In defense of Lenin’s analyses, by Renfrey Clarke and Roger Annis, published in A Socialist In Canada, Feb 29, 2016.

Postscripts (these items are posted on the ‘World news‘ page of A Socialist In Canada):
*  Ilham Ehmed, co-chair of Syrian Democratic Forces, reports to her supporters that the historic meeting with Syrian government officials on July 26 was positive, report by ANF News, July 31, 2018
*  Solution for Syrian Kurds’ future won’t be found in talks with Damascus, says political force tied to Turkey and Western friendly ‘Kurdistan Regional Government’ in Iraq. Report in Rudaw news service, July 29, 2018  [The Kurdish National Council (ENKS) is a Syrian Kurdish political front funded by Turkey and the U.S.-allied President Masoud Barzani of the Kurdistan Regional Government in northern Iraq.]