Safety and climate concerns as oil by rail, and railway profits, surge forward in North America

By Roger Annis, first published on the Vancouver Observer, April 29, 2014 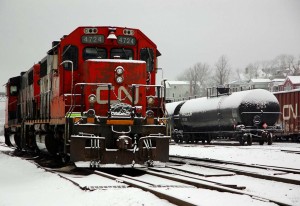 Raitt’s changes come in response to citizen pressure following a string of spectacular oil train crashes in the past nine months, most particularly the crash in Lac Mégantic, Quebec on July 6, 2013 that killed 47 people.

Raitt proposed two measures of substance: speed limits of 80 kilometers per hour must be followed henceforth by trains containing 20 or more wagons of dangerous goods (that speed can be lowered in populated or ecologically sensitive areas), and the most dangerous of the DOT 111 rail wagons used to transport oil—those without continuous crash shields along the bottom, numbering 5,000 or so—be withdrawn from carrying dangerous cargo within 30 days.

Otherwise, the minister says that Canada’s estimated fleet of 65,000 older DOT 111s must undergo modifications within three years to improve crash resistance, and better emergency response plans must be in place when crashes of trains carrying oil and other dangerous goods occur.

Until now, modifications to DOT 111s have been voluntary in the U.S. and Canada. As for emergency response, Canada already has a required ‘Emergency Response Assistance Plan’ (ERAP) system on its railways for the transport of chorine, liquid petroleum gases, explosives and other exceptionally dangerous cargo. That dates from the fallout of a 1979 rail crash and explosion of chlorine and propane in a Toronto suburb that forced the evacuation of 2oo,000 people from their homes. ERAPs will now be required for any train carrying crude oil or other liquid fossil fuel.

Raitt’s announcement creates for the first time a divergence between Canadian and U.S. railway regulations. Cross-border harmonization has been previously assured by Canada simply following any U.S. regulatory lead. Now, for the first time, several distinct, Canadian regulations may come into place for trains that U.S. railways and shippers wish to bring across the border.

This could become a real headache in three years time if U.S. shippers and carriers take longer to modify or phase out older DOT 111s. And since Lac Mégantic, they are showing few signs of any hurry. At a recent National Transportation Board hearing, a representative of the American Petroleum Institute said that older rail cars will be needed for at least ten more years.

Two measures that the federal government is refusing to take, responding to railway insistence, is advance notification by the railways to municipalities of the movement of dangerous cargos through their jurisdictions, and more extensive ‘route planning’ that would direct trains carrying dangerous cargos around populated areas. The latter measure would be costly for the railways and not logistically possible in many cases.

Of continuing note is the failure of the federal government to convene a judicial inquiry into the cause of the Lac Mégantic disaster. For the railways, oil shippers and the federal government, such a proceeding would be very uncomfortable. It would shed light on the string of circumstances that produced the disaster, and that might shed further light on criminal wrongdoing or liability in such areas as:

The dilapidated condition of the Montreal, Maine and Atlantic Railway. The consignee of the oil on the fateful train was Irving Oil of New Brunswick. A consortium came together to begin to ship oil from North Dakota to Irving’s refinery in Saint John, New Brunswick in 2012. The consortium included CP Rail.

The failure to notify and warn communities of the possible safety consequences of the oil by train operation.

The successive decisions by federal rail regulators that allowed MM&A to operate with lesser safety standards that the Class I rail duopoly in Canada, including operating its trains with one employee only.

The mislabeling of the volatility of North Dakota oil that listed it as less dangerous than it was.

To this day, most U.S. oil shippers in North Dakota are refusing to share with the U.S. Department of Transportation the results of their chemical analyses of the crude product they are shipping.

North Dakota (and to a lesser extent Saskatchewan) is the location of the Bakken oil field, the second largest oil field in the U.S. Seventy per cent of its crude oil product is shipped by rail. The volatility of Bakken crude, it turns out, resembles that of refined gasoline.

The danger of railway shipments in North America is illustrated by a front page article appearing in the Toronto Star on April 26. It reports that in a 24 hour survey the newspaper recently conducted of one of the rail lines running through Toronto, owned by CP Rail, it counted more than 130 cars of crude oil, and tankers carrying methyl bromide and ethyl trichlorosilane — highly poisonous chemicals rated among the world’s most dangerous — as well as radioactive material, methanol, diesel, sulfuric acid and other hazardous goods.

The article reports that the railways and the federal government cite ‘security’ reasons for not divulging their shipments. But Fred Millar, a U.S. consultant on chemical safety and rail transport, tells the newspaper, “This security excuse is really a hoax. These are giant tank cars with placards on the sides that tell you what’s in them.”

Surge of oil by rail

This will soon pale in comparison to the huge surge of Alberta tar sands bitumen and conventional oil that is coming. Tar sands and conventional crude producers and shippers are building rail capacity in Alberta and Saskatchewan at a dizzying rate. Some is already operational. The Financial Post reports that a total of 850,000 barrels per day of rail shipping capacity is under construction in Alberta, more than the amount of oil that the Keystone XL pipeline would carry. That’s the equivalent of half a million carloads in one year.

One of the largest operations under construction is being built by Kinder Morgan and Imperial Oil. It will handle 100,000 barrels of dilbit per day, app.1 1/3 unit trains per day, with an expansion capacity to take it to 250,000 bpd once further, feeder pipeline connections are made.

Whether by rail or by pipeline, port authorities in Houston and coastal Texas are gearing up for much more export traffic.

Port export projects are also planned in Saint John, New Brunswick (Irving Oil), on the lower St. Lawrence River at Cacouna, Quebec (TransCanada), and in Portland, Maine. These three projects are in anticipation of the Energy East tar sands pipeline with its planned capacity of 1.1 million barrels per day and the proposed ‘reversal’ of Enbridge Inc.’s aged Line 9 across southern Ontario.

The Seattle-based Sightline Institute says that in the states of Oregon and Washington, 11 refineries and export terminals fed by rail are planned, under construction or already operating. The U.S. Pacific Northwest could soon see as many as one million barrels of crude oil per day on its rail lines.

One factor affecting oil by rail prospects is shipping costs. Compared to pipelines, the cost of shipping oil by rail is approximately double–$15-20 per barrel by rail compared to $7-11 for pipelines. More use of unit oil trains can bring down rail costs, though these heighten the dangers compared to mixed-cargo trains in which groups of cars carrying flammable liquids are separated by cars less-flammable products.

The Financial Post reports that the first unit bitumen train rolled out of Alberta late last year. Gary Kubera, chief executive of Canexus, one of the first oil train terminal companies to expand facilities in Alberta, told Reuters recently, “We expect unit trains will be going to the East, West and Gulf coasts. There is a lot of investment going into refineries to allow them to move crude by rail.”

One of the consequences of the surge of oil by rail (and coal) is that non-fossil fuel customers get short shrift because oil (and coal) shipments are more lucrative for the railways. For grain farmers in Canada and the U.S., 2013 was a bumper year, but they have lost significant income for lack of timely rail transport to get crops to market. The situation in Canada has become so bad that the federal government was obliged to adopt a special law in late March directing the rail companies to transport specified, weekly amounts of grain for the foreseeable future under penalty of fines. U.S farmers are also complaining, but so far there is no government action.

In Canada, there is a legislated maximum rate dating from the year 2000 that the railways can charge to grain farmers.

Last December, some Amtrak passenger train service connecting Chicago and the west coast was cancelled because of heavy coal and oil traffic on shared rail lines.

Meanwhile, a new entry to the fossil fuel-congested rail line story is… sand! The product is required extensively for oil and gas fracking. U.S. fracking-sand shipments have jumped more than fourfold since 2007, to 20.9 million tonnes in 2012, according to Freedonia Group, a Cleveland-based market researcher. Demand is expected to more than double to 47.3 million tonnes by 2022, the group predicts.

It’s all a major profit bonanza for the railways. In Canada, CN and CP reported first quarter profits in 2014 of $254 million and $623 million, increases of 17 per cent and 12 per cent, respectively, over the same quarter last year. Overall revenues in 2013 were up seven per cent at CN and eight per cent at CP.

All of this comes as scientists are saying ever more urgently that if humanity is to avoid runaway global warming with catastrophic consequences for human society, a rapid shift is needed away from the extraction and burning of fossil fuels. The latest such warning is in a report by the United Nations’ Intergovernmental Panel on Climate Change released in late March. The report was the result of three years’ work by more than 300 scientists around the world.