Statement by Permanent Representative of the Russian Federation to the Organisation for the Prohibition of Chemical Weapons (United Nations) on the chemical incident in Salisbury, England, delivered at The Hague, March 13, 2018 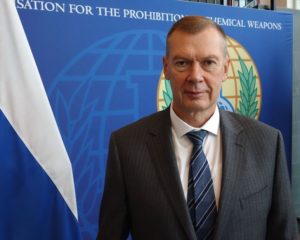 Alexander Vasilievich Shulgin, Permanent Representative of the Russian Federation to the OPCW

In connection with the vicious attacks launched by British officials in London, as well as the statement by the head of the British delegation to the OPCW with regard to Russia concerning the suspicious story of two persons poisoned with a toxic agent in Salisbury, we would like to state the following.

The British authorities’ unfounded accusations of Russia’s alleged involvement in using poisonous agents on their territory are absolutely unacceptable. Our British colleagues should recall that Russia and the United Kingdom are members of the OPCW which is one of the most successful and effective disarmament and non-proliferation mechanisms. We call upon them to abandon the language of ultimatums and threats and return to the legal framework of the chemical convention, which makes it possible to resolve this kind of situation.

If London does have serious reasons to suspect Russia of violating the CWC – and the statement read by distinguished Ambassador Peter Wilson indicates directly that this is so – we suggest that Britain immediately avail itself of the procedures provided for by paragraph 2 of Article 9 of the CWC. They make it possible, on a bilateral basis, to officially contact us for clarifications regarding any issues that raise doubts or concerns.

We would also like to emphasise that such clarifications under the Convention are provided to the requesting member state as soon as possible, but in any case no later than 10 days following receipt of the request. As such, the ultimatum’s demand that information be provided immediately, by the end of today, is absolutely unacceptable.

Our British colleagues should save their propaganda fervour and slogans for their unenlightened domestic audience, where perhaps they will have some effect. Here, within the walls of a specialised international organisation, such as the OPCW, one must use facts and nothing but the facts. Stop fomenting hysteria, go ahead and officially formalise your request to begin consultations with us in order to clarify the situation. A fair warning, we will require material evidence of the alleged Russian trace in this high-profile case. Britain’s allegations that they have everything, and their world-famous scientists have irrefutable data, but they will not give us anything, will not be taken into account. For us, this will mean that London has nothing substantial to show, and all its loud accusations are nothing but fiction and another instance of the dirty information war being waged on Russia. Sooner or later, they will have to be held accountable for their lies.

In addition, in this particular case, it would be legitimate for the British side to seek assistance from the OPCW Technical Secretariat in conducting an independent laboratory analysis of the available samples that allegedly show traces of nerve agents in Salisbury.

We ask you to circulate this statement as an official document of the 87th session of the OPCW’s Executive Council and post it on the Organisation’s external server.

For extensive coverage of Britain’s accusations and threats against the Russian Federation on this matter, follow the ‘World news‘ page, updated daily, on A Socialist In Canada website. Here are the related items appearing there on March 12 and 13, 2018:

*  Novichok – toxic questions about chemical at center of Skripal saga in Britain, including Russia’s UN-verified destruction of its entire chemical weapons capacity in 2017, RT, Mar 13, 2018

… “We have certainly heard the ultimatum voiced in London,” Lavrov said on Tuesday. “The spokesperson for the Foreign Ministry has commented on our attitude to this,” he added referring to Maria Zakharova branding of May’s appearance in Parliament as a “circus.”

He added that a case of alleged use of chemical weapons should be handled through the proper channel, being the Organization for the Prohibition of Chemical Weapons (OPCW) – of which both Russia and Britain are members.

“As soon as the rumors came up that the poisoning of Skripal involved a Russia-produced agent, which almost the entire English leadership has been fanning up, we sent an official request for access to this compound so that our experts could test it in accordance with the Chemical Weapons Convention [CWC],” Lavrov said. So far the request has been ignored by the British side, he added…