Russian Marxist Alexander Buzgalin discusses with The Real News Network the hidden history of the Soviet Union, as Buzgalin lived it

Interview with Professor Alexander Buzgalin, broadcast in 12 parts by The Real News Network with host Paul Jay, July 11 to July 28, 2018. Links to each part of the full interview are published here on A Socialist In Canada, Aug 2, 2018. Each interview part includes interview video as well as transcript. Dates are broadcast dates.

The history of the Union of Soviet Socialist Republics (USSR, Soviet Union) and its peoples is one of the most censored and shrouded-in-propaganda stories in the West that Western audiences will encounter. For that reason, this interview with Alexander Buzgalin is especially valuable and informative for Western readers. 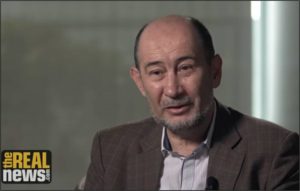 Alexander Buzgalin is a professor of political economy and the director of the Center for Modern Marxist Studies at Moscow State University. He is an editor of the left-wing, Russian magazine Alternatives, a coordinator of the Russian Socialist movement Alternatives, and the author of more than 20 books and hundreds of articles translated into English, German and other languages. Professor Buzgalin is a firm believer in the relevance for today of the ideas of Karl Marx, Frederick Engels, Vladimir Lenin and other Marxist theoreticians and political leaders. He is a self-described communist.

See below for several critical comments on the interview by Roger Annis.

Part 11: Many Russians think climate change is propaganda to weaken their economy, July 27, 2018

Comments by Roger Annis:
Most of the interview with Alexander Buzgalin covers the history of the Soviet Unoin, and, in particular, Buzgalin’s experience in living that history. He was born in 1954. Much material is covered. One crucial part of Soviet history, however, is only briefly touched upon by Professor Buzgalin. That’s the mixed economy, ‘New Economic Policy’ (NEP), which governed the early Soviet Union from the time of the ending of the Western military intervention (‘Civil War’) into Russia in early 1921 until 1928. NEP was abruptly ended by the Soviet government under Joseph Stalin, the first major policy initiative following Stalin’s accession to the dominant role in the Soviet government. The Stalin-led government quickly took the Soviet Union into a period of forced-march industrialization and forced collectivization of agriculture. These policies eventually led to sharp increases in industrial and agricultural production prior to the outbreak of World War Two, but at the cost of many human lives and loss of socialist democracy.

When the interview with Professor Buzgalin enters briefly into contemporary politics, the anti-Russia prejudices of interview host Paul Jay become evident. In part ten, Jay summarizes Russia’s military intervention into Syria, at the invitation of the Syrian government, as one of “bombing and slaughtering civilians”. Buzgalin defers to his interview host.

Buzgalin cites the popularity among Russians of Vladimir Putin’s assertion of Russian sovereignty in the face of U.S. and NATO threats and aggression. The two then go on to discuss the world situation which finds Russia and the U.S. in a new cold war confrontation. The characteristics of the Russian social formation–as a capitalist country but not an imperialist one–is lost on the two. Jay asks, “Is it better to have one killer cop dominating the world (the U.S.) or two killer cops (U.S. and Russia)?” The two appear to agree that Russia is, indeed, a “killer cop” on par with the U.S., though Buzgalin intimates ever so slightly that Jay’s suggestion of Russia as a rival ‘imperialist’ country to the U.S. warrants critical inquiry.

Part 11 of the interview is titled ‘Many Russians think climate change is propaganda to weaken their economy’. Professor Buzgalin explains that the global warming emergency is not well understood by the Russia population and is not a compelling political issue on the agenda of the Russian government. Whether progressive environmentalists and other left-wing thinkers in Russia and in the West could work together to change this situation and how to do so is not discussed.