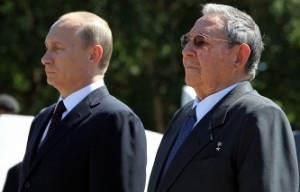 MOSCOW, Russia–While corporate media’s news of Russia is focused on its man of the hour in Kyiv, Ukraine President Petro Poroshenko, and speculates on his next move in the shooting war he is waging against citizens in the east of the country, the news here in Moscow is considerably broader in scope and quite dramatic.

On July 9, the Council of the Russian Federation (the upper house of Russia’s Parliament) voted to annul ninety per cent of the $35.2 billion in debt which Cuba was said to owe to Russia dating from the era of the Soviet Union. The Duma (Russia’s lower house) voted in favour of the proposal five days earlier.

The agreement was more than one year in the making. It creates considerable openings for the two countries to deepen their economic and political ties. They have disputed for years exactly how much Soviet era debt is owed to Russia.

The debt cancellation comes as President Vladimir Putin begins a five-day state visit to Cuba, Argentina and Brazil. He arrived in Cuba on July 11 and met with President Raul Castro. He also met Fidel Castro, who is retired from political life and is 87 years old.

On his way to Argentina today, Putin made a surprise stop in Nicaragua and met with the leadership of that country.

While in Brazil, Putin will attend the summit meeting of the BRICS group of capitalist countries and he will attend the final game of the World Cup of Football. The president will formally take part in the closing ceremonies. Russia is host country of the 2018 World Cup. 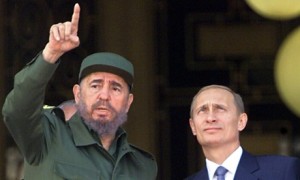 Presidents Vladimir Putin and Fidel Castro in Cuba in 2000

A July 11 Moscow Times article (subscriber only) provides detail of Russia’s plans to deepen its economic and political relations with Latin America. In Argentina, Putin will discuss with President Cristina Fernandez de Kirchner joint projects in the fields of atomic energy, military technical cooperation and machine-building.

Talks with President Dilma Rousseff of Brazil will focus on the multilateral forums in which the two countries work, including BRICS–the grouping of countries comprising Brazil, Russia, India, China and South Africa–the United Nations, G20 and World Trade Organization.

At the BRICS summit meeting on July 15 and 16, Russia will propose the creation of a BRICS energy association “aimed at ensuring the energy security of the participating countries”, according to Interfax. The BRICS meeting is expected to ratify an agreement to create a development bank with an initial capitalization of $100 billion.

The Times article explains, “On the sidelines of his visit to Havana, Putin is expected to meet with Nicaraguan President Daniel Ortega to discuss Russia’s involvement in the construction of a canal that will connect the Atlantic and Pacific Oceans and rival the Panama Canal. Construction of the 278 kilometer-long canal is scheduled to begin in December.

Neither the energy or bank agreements of the BRICS countries signify a departure from the imperialist system of domination in which they play a significant role. The BRICS are entirely a part of the climate and social wrecking system of capitalism. (See a Sept 2013 article in Counterpunch by South African Patrick Bond that describes the BRICS as a “legitimizing device” of global finance.) But the conflicts and rifts that are created by the imperialist countries’ hostile moves against the lesser BRICS powers, such as we are seeing in eastern Europe today, open up political and economic space that popular governments and movements can use to advance their interests.

Also reported in the Moscow Times on July 11 is that Russia has given to its small, neighbouring country Belarus four batteries of one of the world’s most advanced air defense system, the Russian designed and built S-300. The weapons cost hundreds of millions of dollars and are capable of shooting down fighter aircraft, cruise missiles and even ballistic missiles. The S-300 can fire multiple air defense missiles every three seconds. 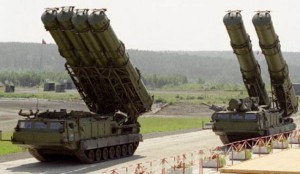 The military cooperation between Russia and Belarus is a sharp answer to the provocations of the NATO military alliance in encouraging regime change earlier this year in Ukraine and seeking to bring that country under the NATO military umbrella. NATO moves against Ukraine are part of its long-standing drive to isolate and weaken Russia.

France, meanwhile, is opting to proceed with a sale to Russia over U.S. objections of two of the most advanced navy ships in the world, the Mistral class amphibious assault vessel. The ship is much more advanced than any navy vessel that Russia can presently construct. The first ship is built and will be commissioned on November 1.

According to an agreement between the two countries, once the first two vessels have been delivered, Russia has the option of using the acquired know-how to build two of the vessels itself. That’s the part that rankles the U.S.

The recent plebiscite vote that brought the region of Crimea into the Russian Federation ends restrictions on the number of submarines and surface naval vessels that Russia can station at Sevastopol, the home of its Black Sea fleet. Russia’s Sevastopol naval base was subject to an agreement with Ukraine until the changeover in Crimea. Another altering of the status quo.

Russian courts have recently issued arrest warrants against Ukraine political leaders, accusing them of war crimes. Among those named is Ukraine Interior Minister Arsen Avakov. The court declarations come as Ukraine officials admit that their military offensive in the east of the country has killed 478 civilians. Russia Today also cites Ukraine officials as saying 1,392 civilians have been injured. 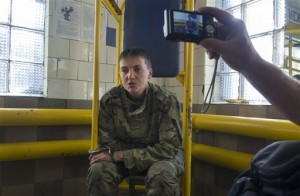 Nadezhda Savchenko speaks to journalists shortly after her arrest in Luhansk on June 19, 2014, AP photo

A female Ukrainian army officer is being held in a Russian prison and faces criminal charges for aiding in the deaths of Russian journalists Igor Kornelyuk and Anton Voloshin on June 17 in Luhansk, near the Russian border in southeast Ukraine. They were killed by Ukraine army shelling. Ukraine says the soldier, Nadezhda Savchenko, was “kidnapped” by self defense forces that it calls “terrorists” and taken across the Russian border.

Savchenko told an interview on Russia’s NTV network, “How many times have I killed? I participated in the peacekeeping operation in Iraq between 2004 and 2005. This time, I killed people during the anti-terror operation in Ukraine.”

The United States is calling for her release.

The Guardian is reporting that tens of thousands of residents of Donetsk in southeast Ukraine have fled the city in recent days as the Ukraine army moves into positions on the city’s outskirts and sets up artillery batteries. Heavy fighting is occurring in the southeast, including a devastating rocket attack on a Ukraine armoured column and border post on July 10 that killed 23 soldiers and border police. It occurred near the village of Zelenopolye in the Lugansk region. 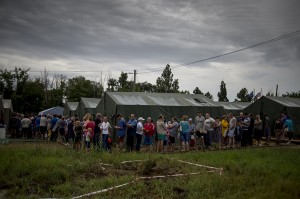 Refugees in Rostov, Russia displaced by the Ukraine government’s war against its people, photo RIA Novosti

Ukraine’s billionaire president is making claims he made earlier regarding the city of Slavyansk that his regime will not shell Donetsk. Slavyansk was devastated by several months of siege and shelling and bombing by the regimes of Poroshenko and his predecessor. They name the carnage they are inflicting on residents of eastern Ukraine an “anti-terrorist operation”. Self defense forces carried out a strategic withdrawal from Slavyansk late last week, saying they faced superior forces and could not stop the shelling. (See ‘Life in a war zone [Slavyansk]’, in The Guardian, July 5.)

Bloomberg News quotes a 23 year old autoworker, Dmitry, on July 10 explaining, “People are scared the city will be bombed. Planes bombed the Petrovka region nearby this week and my friends saw craters four metres wide on the road. Kyiv says it’s not bombing anyone but people have stopped believing the official line.”

The new refugee wave from Donetsk adds to the more than 100,000 who have already taken refuge in Russia from the operations of the Ukraine army and its allied, fascist militias in southeast Ukraine. Tens of thousands more have been driven into internal exile.

Thirty two year-old Oleksandr told Bloomberg he fears a devastating blockade similar to the one that ravaged Slavyansk. He’s not hanging around to see what happens. “We’ll lose water, electricity and phone connection.” Water rationing has begun in Donetsk.

Evacuations to Russia are also happening further south in Luhansk. It is out of range of Ukraine artillery, but air strikes have killed residents.

The U.S. government has admitted to providing $23 million of military aid to the governing regime in Kyiv. Details of the rest of the aid, training and operation of fighter aircraft The full poll report in Ukrainian is here. The numbers scored by the fascist and extreme right parties are not reporting in the news summaries of the poll.

City councilors in Lviv, western Ukraine want President Petro Poroshenko to declare as national heroes two World War Two collaborators with the Nazi invasion and occupation of Ukraine. In 2010, a court in Donetsk nullified declarations to this effect made in 2007 and 2010 by former Ukraine president Victor Yushchenko. There were several appeals to higher courts against the Donetsk ruling but they were turned down.

The internet is flooded with videos of the killings and rampages by fascist militias in eastern Ukraine. The fascists like to boast about their murders and rampages. Here is one video of a battalion of the neo-Nazi Right Sector near the village of Karlovka, southeast Ukraine on July 6. Right Sector leader Dmytro Yarosh addresses his ‘troops’ shortly after they had engaged in a skirmish with self defense fighters. Below is the translated text of his remarks. Note the close ties with the Ukraine army and U.S. advisors that Yarosh acknowledges in his remarks:

Yarosh: Everybody, attention! We worked well today. Certainly we’d like something more. But with our forces as they are, we actually couldn’t reach better results. We expected that when we entered into fighting the armoured vehicles would come to help us. We expected reinforcement to come but it didn’t happen. We expected that artillery would totally smash those checkpoints – and it has been shelling them for 1.5 hours – but it didn’t smash them.

Still, we performed our duty well. Let’s call it an offensive reconnaissance. And we worked well together with our guys from the Donbass Battalion and military units.

Unfortunately, we have one injured, but he will live – the bullet went right through him. I’m very happy to see all of you alive – that’s the important thing for me. We’ll have many other battles of this kind. So, as we return to base, we should analyze our mistakes because there were some. Lessons should be drawn by all our units, and by our friend ‘Wolf’ [one of the commanders].

We should train more – then there will less of our blood spilled and more of the enemy’s.

About weapons and armament – we should work on this issue, too. I’ll go to the U.S. and I hope that our recent battle convinces them. I’ll ask them to provide us, at last, with other respective ‘arguments’ – more arms and ammunition. And now – following the order of our friend Wolf – to the cars and to base. Any questions or brilliant ideas?

A voice of one of the paramilitaries: Maybe we should check with army regulars and stay with them here a little longer?

Yarosh: If there’s a need, then, of course, we’ll provide them with our people.

The latest action of the growing international solidarity campaign with Ukraine took place in London UK on July 9 when 50 people protested outside the offices of the European Union, condemning EU support for the war in eastern Ukraine.