Review of John Riddell’s ‘Toward the United Front’

Revolutionaries in a time of retreat 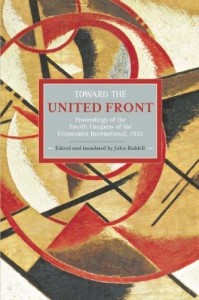 When the Communist International was founded in March 1919, the world was in a time of revolutionary ferment. Three and a half years after the capitulation to imperialist jingoism by the leaders of the Second International, the Russian Revolution had given a new impetus to the left wing of the international socialist movement, as the Bolsheviks demonstrated a revolutionary means to end imperialist war.

Following the Russian example, revolutionary workers of several other European countries formed soviets, or councils of workers’ deputies as organs of working-class power, but despite some fleeting successes — Soviet republics were briefly established in Bavaria and Hungary — state repression and cooptation by reformist elements demonstrated the need for coordinated revolutionary leadership.

In November of 1922, representatives of dozens of national Communist Parties across six continents converged in Petrograd for the Comintern’s Fourth Congress. The international landscape was no longer what it had been in 1919.

Throughout Europe, the postwar revolutionary upsurge had been countered by a bold capitalist counteroffensive; revolutionary workers’ movements in Germany and Italy had gone down in defeat, and it was becoming increasingly clear that international socialist revolution would not happen overnight.

Meanwhile, after emerging victorious from a lengthy civil war, Soviet Russia had recently enacted the New Economic Policy, viewed by many as representing a rapprochement with capitalism.

Snapshot of a key moment

Toward the United Front: Proceedings of the Fourth Congress of the Communist International, 1922, edited and translated by John Riddell, stands on its own as a snapshot of the international Communist movement at a key moment in its development. It is also the continuation of a much more ambitious documentary history of the Comintern begun by Riddell in 1984; Pathfinder Press published six volumes of The Communist International in Lenin’s Time under Riddell’s editorship between 1984 and 1993. Previous volumes document the first and second Comintern congresses as well as the Baku Congress of Peoples of the East in 1920.

(A prolific historian and writer, Riddell produces a lively blog of commentary and discussion at johnriddell.wordpress.com.)

Toward the United Front, published by Haymarket Books (originally in hardcover from Brill), does not pick up chronologically where the last volume left off, though Riddell promises a future volume will document the proceedings of the Third Congress.

At well over a thousand pages and $55 for the paperback edition, it is unlikely Riddell’s work will reach outside a specialized audience. Nevertheless this is a valuable work of interest not just to historians but to revolutionary socialist activists of the 21st century, showing an international gathering of dedicated revolutionaries grappling with how to formulate a revolutionary policy for non-revolutionary times.

Vladimir Lenin frequently insisted that revolutionary Marxists must take as their starting point “a concrete analysis of a concrete situation.” In this spirit, the Fourth Congress devoted three days of plenary discussion to “The Capitalist Offensive” which informed the Comintern’s strategic orientation.

In his report, Karl Radek vividly portrays the state of the international class struggle. Radek cites strike statistics to show the gains won by workers in the immediate postwar period of militant struggle, and the systematic beating back of wages and working conditions coinciding with the waning of the workers’ movement beginning in 1920. He demonstrates the attempts of international capitalism to restore capitalist stability by forcing workers to bear the brunt of the Versailles Treaty.

Radek’s presentation also devotes attention to the recent Fascist victory in Italy and the threat posed by fascist movements elsewhere in Europe. Despite the surprisingly nonchalant attitude taken by Italian delegate Bordiga, most delegates who spoke on the issue of fascism recognized the gravity of the Italian Fascists’ victory, which Radek calls “the greatest defeat that socialism and communism have suffered since the beginning of this period of world-revolution.” (p. 386)

The Comintern’s united front tactic, formulated in 1921, was intended as a means for the Communist Parties to gain greater influence within social struggles as well as spur reformist forces into action.

Although nearly all delegates paid lip service to the slogan of the united front, attempts at implementation met greater resistance. The notion of forging alliances with reformist forces who had demonstrated their treachery on numerous occasions provoked a visceral reaction from many.

Karl Becker of the German delegation replied to those who insisted only on a “united front from below”: “… After any major betrayal by the Social-Democratic leaders in some united-front action, tendencies are immediately evident among entirely good comrades who say that… these negotiations with the Social-Democratic leaders must be the last. . . In Germany, we have always replied to such mechanical conceptions by saying, if you can generate enough activity so that, two months from now, we no longer need to negotiate with the Social-Democratic leaders because they no longer have mass support, then we will not negotiate with them ever again. But, so long as the leaders have masses organized behind them, we will have to continue to negotiate.”

Efforts to build a united front within the trade unions were met with other challenges, as Communists were expelled en masse from many unions of the reformist-led Amsterdam International. While the Comintern continued to promote the Red International of Labor Unions as a rival to the Amsterdam International, it insisted that Communist trade unionists fight to remain within the already established mass unions, establishing Communist cells to gain influence within them rather than walking away and building small parallel structures with a more revolutionary orientation but little influence within the broader class struggle.

Of particular interest are plenary discussions and subsequent resolutions on “The Eastern Question,” and “The Black Question,” the latter led by U.S. delegate Billings (Otto Huiswood) and Claude McKay, then a leader of the African Blood Brotherhood (which would soon merge with the U.S. Communist Party).

Billings and McKay spoke of the resonance of the Comintern’s anti-imperialist line among Black radicals in the United States, in stark contrast to the backwardness of the Second International. Says Billings:

Two days of discussion were devoted to “the Eastern Question,” which included contributions from delegates of Communist Parties from India, China, Japan, and Egypt, as well as a delegate from Tunisia, Tahar Boudengha, who took the French party to task for its failure to combat racist, chauvinistic attitudes among many French Communists in Tunisia and Algeria.

He reads from a statement by a Communist group in Sidi-Bel-Abbès, Algeria, taking exception to the Comintern’s insistence that all Communist parties “support every liberation movement in the colonies not only in words but in deeds” and “to demand that the imperialists of its country be driven out of these colonies”:

The native population of Algeria can only be liberated as the result of the revolution in France. . . They are fanatical and fatalistic, patient and resigned, oppressed and imbued with religious prejudices. At this time, they still cannot imagine their liberation. . . It is entirely unnecessary to publish calls to rebellion in our press or distribute Arabic-language leaflets, as many have recommended. (p. 701n)

Boudengha calls on the French party to expel the “gentlemen” who published the pamphlet, and warns that “the French comrades must take note. . . that the proletarian revolution in France is doomed to sure failure so long as the French bourgeoisie holds the colonial population under its rule.” (p. 703)

Russian delegate Safarov joins Boudengha in denouncing the “so-called Communists” in Sidi-Bel-Abbès; a footnote by Riddell informs us that “In December 1922, most Sidi-Bel-Abbès CP members rejected the Fourth Congress decisions and left the Party.” (p. 702n)

A great deal of the discussion at the Fourth Congress was devoted to organizational questions, in particular to interventions within the Communist Parties of France and Norway, both former sections of the Second International which brought much of that organization’s baggage with them into the Comintern.

While these discussions were comradely and on the whole conducted in a conciliatory spirit, a potential warning sign can be seen in the Comintern Executive Committee’s May 1922 decision, after multiple attempts to discuss the issue with French party representatives had met with evasion, to expel journalist Henri Fabre from the Comintern (and, by extension, from the French CP) over the head of the French party leadership.

In response to the failures of member parties to respond to major crises (e.g. the victory of Fascism in Italy), several delegates spoke on the need for increased centralization in the Communist International. In a resolution on reorganizing the Executive Committee, the Fourth Congress reaffirmed its commitment to a democratic centralism that endorsed a genuine commitment to both centralism and democracy.

This resolution in itself does not contain the seeds of the Comintern’s degeneration, widely recognized as having begun with the Fifth Congress in 1924. Nevertheless, it is hard to argue for the practicality of an international body as large as the Communist International operating effectively under the leadership of a strong centralized Executive Committee.

One can point to both the Comintern’s increasingly centralized structure and the overly deferential attitude taken toward the Russian party leadership as major flaws that contributed to its ultimate destruction as a revolutionary international organization.

Toward the United Front shows an international Communist movement that, having outgrown past “infantile disorders,” had yet to reach full maturity. It was nevertheless a serious organization; despite a number of errors and shortcomings, the discussions demonstrate great revolutionary potential on the part of most member parties.

Revolutionaries of the 21st century can look to the early years of the international Communist movement as an important moment in socialist history; by making these documents available to a new generation, John Riddell has done a noble service to the cause of revolutionary Marxism.

This review first appeared in the May-June 2014 issue of the U.S.-based magazine Against the Current and is republished by permission from the associated website Solidarity. See other reviews of the same book here on the website of author John Riddell.


Toward the United Front is available in paperback from Haymarket Books for $55, and in a library hardback edition from Brill Academic Publishers for $283. This 1,300-page volume is the seventh book of documents on the world revolutionary movement in Lenin’s time edited by John Riddell.