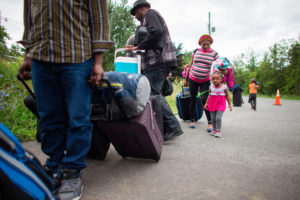 Donald Trump has ordered an end to the Temporary Protected Status (TPS) of 59,000 Haitian refugees and economic migrants living in the United States. The protected status which dates from the January 2010 earthquake in Haiti will end in July 2019, the Trump regime has decided. (See: Trump to 59,000 Haitians: you have 18 months to pack your bags, VOX News, Nov 20, 2017.[1])

The protected status of 262,000 people from El Salvador and 57,000 from Honduras living in the U.S. is similarly threatened. The Salvadorans’ status is up for renewal in March 2018. No date is set for a decision on the status of Hondurans.

What will happen to the 59,000 Haitians? Is it safe for them to return to their home countries? If not, why not? Why did they leave Haiti in the first place? Why are they being forced to return home?

Who cares? According to a Canadian Press report published on CBC News, the only apparent concern for Canadians is that Canada is threatened by Trump’s inhumane refugees policies, not the victims who may seek refuge in Canada.

The CP report on the state-run CBC news explains that the response of the Canadian government to the TPS emergency in the U.S. is to tell victims they are not welcome in Canada. Indeed, Liberal MP Emmanuel Dubourg is stressing to all who will listen that the rate of acceptance of refugee applications by Haitians in Canada has fallen to ten per cent.

That is not a criticism of Canadian refugee policy on Dubourg’s part. He is hardly sympathetic to Trump’s victims. Rather, he is one of the representatives selected by Ottawa to travel to cities in the United States to deliver a message that Haitian refugee applicants are not welcome at ‘unauthorized’ land border crossings. Canadian Press reports:

“I’m there to inform them: be careful before you make a decision [to cross the U.S. border into Canada and make a refugee claim],” he said in an interview Monday (November 20].

Dubourg, who is Haitian, will also be trying to clear up a misconception that asylum is simple to obtain in Canada. He said statistics he has seen suggest the acceptance rate for Haitians who arrived over the summer now sits at 10 per cent, down from about 50 per cent previously. The Immigration and Refugee Board was unable to immediately confirm that number…

Another Canadian Press report, this one in The National Post and Toronto Star on November 20, explains:

Liberal MP Emmanuel Dubourg said that the recent announcement that Canada will accept close to one million immigrants over the next three years ended up as a story in the Haitian press about Canada opening its doors to a million immigrants this year. It was framed as proof Haitians were welcome.

Dubourg said he called the paper two weeks ago to clear things up but not before he realized the story had been shared hundreds of times on Facebook.

He said there is a great deal of uncertainty in the Haitian community but the message needs to get out that Canada isn’t necessarily a default option. He’ll be taking that to New York on Tuesday in his second trip to the U.S. for outreach purposes.

Canada ended its ‘Temporary Suspension of Removals’ policy for Haitian nationals on August 4, 2016. The policy was implemented following the 2010 earthquake. It was ended under the bogus claim that living conditions in Haiti had stabilized and were improving.

El Salvador and Honduras, respectively, have the highest and second highest rates of murder in the world, according to the United Nations Office on Drugs and Crime (Wikipedia).

The elected president of Honduras was overthrown in a violent, military coup in 2009 that was backed by the U.S. and Canada. That coup bore all the hallmarks of the coup in Haiti in February 2004 which overthrew the elected President Jean-Bertrand Aristide.

El Salvador was the victim of a vicious, U.S.-backed paramilitary civil war during the 1980s and 1990s. That war ran parallel to the U.S.-funded and organized ‘contra war’ seeking the overthrow of the government of neighbouring Nicaragua and the 1979 Sandinista Revolution which brought it to power.

One CBC report in August 2017 did provide some sympathetic description of why Haitian refugees are in the U.S. and why they may be looking to move north. But this report has long since been drowned out by the overriding theme of CBC and other mainstream news coverage, which is that Canada is threatened by uncontrolled waves of Haitian refugee claimants arriving at its land borders.

CBC opinion “producer” Robyn Urback set the tone in a commentary on August 23 that was headlined, ‘PM should speak to Haitians and reveal low rate of acceptance for claims’. Her commentary was sub-headlined, ‘Trudeau must dispel the myth there’s ‘always a place’ for refugees in Canada’.

That’s easy to write when you’re not Black and have never likely set foot in Haiti; when your homeland, unlike Haiti, has not been a victim of foreign military coups and a 14-year-and-counting foreign, Canada-directed military occupation regime (the UN Security Council’s ‘MINUSTAH’); and when you haven’t suffered a disastrously failed ‘earthquake aid’ program staged by Canada, the U.S. and other Western powers following the 2010 earthquake in Haiti.

Canada’s mainstream media hailed the decision of Canada’s government in 2015 to accept 30,000 refugees from Syria. That decision was welcomed because it was in line with Canada’s anti-Russia foreign policy and Canada’s backing of efforts spearheaded by its NATO ally the United States and Saudi Arabia to overthrow the Syrian government.

The Associated Press has a brief report on November 21 explaining how Haitian Americans are organizing to reverse the TPS decision of Canada’s White House ally.

Note:
[1] VOX reports the United Nations’s inflated figures for 2010 earthquake deaths, saying, “Haiti’s been covered by Temporary Protected Status since shortly after the 2010 earthquake that killed as many as 316,000 people and displaced 1.5 million more.” The displacement figures are accurate, though they were fueled by already-desperately poor Haitians looking for relief from the aid that arrived in the country following the earthquake. But the only scientific study of earthquake deaths arrived at an estimation of 40,000 to 70,000 deaths. That is a dire humanitarian disaster in its own right.

The UN’s inflated figures served to fuel the fundraising for earthquake relief that benefitted the aid and charity industries. With important exceptions that deserve much praise, most of the Haiti aid money was not spent in the country and it failed to bring any lasting change to the lives of Haitians. It certainly never came close to the pledges of Western government to ‘build back better’ in Haiti. That story is told in Tim Schwartz’s 2017 book, The Great Haiti Humanitarian Aid Swindle.

*  Department of Homeland Security distorts law and precedent to ignore glaring facts on Haiti TPS, by the Institute for Justice and Democracy in Haiti (Boston), Nov 22, 2017

From February to October 2017, immigration officials granted asylum to 72 per cent of the 1,314 refugee claims processed, but Haitians only had a 17 per cent acceptance rate.

With another influx of Haitian refugees from the U.S. in sight, Immigration Minister Ahmed Hussen is warning that Canada is not a viable option for them — and data released Wednesday by Ottawa backs him up on that.

The federal government has been on high alert since the Trump administration announced this week it will end its temporary residency permit program that has allowed 60,000 Haitians to stay in the United States. Haitian migrants have until July 2019 to return to their country. On Wednesday [Nov 22], the Immigration and Refugee Board of Canada released data on the outcomes of the 1,314 asylum decisions made involving those who crossed unguarded points along the border with the United States from February to October. Of those, 941 were accepted and 373 rejected. Some other 258 claims were either abandoned or withdrawn. Almost 12,900 of the 14,470 refugee claims are still pending.

Haitians, who account for 6,304 or 44 per cent of those claims, were among those with the lowest acceptance rate, at 17 per cent. Only 29 of the 168 Haitian border-crossers were granted asylum after a hearing as of Oct. 31.

On Wednesday, Hussen cited the Haitians’ acceptance rate as 10 per cent, using the number of cases “finalized” as the base which included the 130 additional claims that were either abandoned or withdrawn from the system, instead of just the total positive and negative decisions rendered by a refugee judge. “Coming to Canada first of all has to be done through regular channels, and secondly the asylum system is only for people who are in genuine need of protection,” Hussen told reporters. “It’s not for everyone.”

Critics question the timing of the release of the data as well as the refugee board collection of data by the means asylum-seekers arrived. “It’s questionable why they are pulling out these claims based on where and how they entered Canada,” said Janet Dench of the Canadian Council for Refugees. “The information is not relevant to their claims.”

Since December 2016, on the eve of President Donald Trump’s travel bans against immigrants and refugees, migrants in the U.S. started trickling into Canada through unguarded points along the land border in Manitoba and Quebec to circumvent a bilateral pact that limits refugees to seeking asylum in the first of the two countries they arrive in. The bilateral pact only applies to those crossing the border at the official ports of entry. The influx peaked in August when 6,000 people arrived in Quebec alone, the majority of them French-speaking Haitians.

While the Haitian asylum-seekers are having a tough time being granted asylum, the refugee board statistics show the overall acceptance rate of the border-crossing group at 72 per cent. From February to October, 99 per cent of the 174 Turkish decisions were positive; Syrians were at 96 per cent; Eritreans at 99 per cent; Yemenis at 100 per cent; Djiboutians at 85 per cent and Sudanese at 79 per cent.

Both Canada and the U.S. offered temporary refuge for Haitians after the 2010 earthquake as they paused deportation to the country. Canada cancelled the special program earlier this year as conditions on the island have improved.

Dench, of the refugee council, said most of the countries with high acceptance rates fall under the refugee board’s expedited program which prioritizes cases from places where the crises and conditions are so bad that most claims are likely to succeed.

Many of these asylum-seekers also have trouble securing legal representation and filing their asylum narratives in time, and risked having their claims considered abandoned, she said. “We are profiling the (outcomes of) claims based on country of origin,” said Dench. “It should be based on a claimant’s individual situation.”

Meanwhile, Public Safety Minister Ralph Goodale said Canada will “be ready to cope” with another possible surge in asylum-seekers. “We’ve had contingency planning underway now for some time, working also with provinces and municipalities to make sure that we can do two things,” Goodale told reporters. “Number one, enforce all Canadian laws; and number two, meet all Canadian obligations under international (refugee) conventions.”

However, the union representing border agents has expressed doubt. “We don’t think the government is ready to face another crisis,” said Jean-Pierre Fortin, president of the Customs and Immigration Union, in September.

With files from Alex Boutilier and The Canadian Press