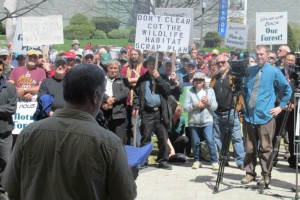 The incumbent Conservative Party that made natural gas fracking a centrepiece of its election platform has lost the Sept 22 election in New Brunswick. The new premier is Brian Gallant of the Liberal Party. The election provides an interesting snapshot of popular opinion on major environmental and social issues.

The Conservatives and Premier David Alward who went down to defeat made continued promotion and financing of natural gas fracking the centrepiece of their election campaign. Their representation in the Legislature dropped from 42 districts to 21. The Liberals rose from 13 to 27.

Gas fracking in the province made national and international headlines last year when police attacked an anti-fracking protest that had disrupted exploratory drilling near the town of Rexton and the traditional Mik’maq territory of Elsibogtog.

The winning Liberals say they will place a moratorium on fracking. The recently elected Liberal Party in Nova Scotia has also declared a fracking moratorium.

The Green Party scored a breakthrough in the election by electing leader David Coon in the district of Fredericton South. The party was the only one to flat-out oppose gas fracking.

The Greens are also the only party to oppose the proposed Energy East crude oil pipeline. That $10 billion project is heavily backed and promoted by the federal Conservative government. It would see Alberta tar sands bitumen piped across Canada to shipping ports on the St. Lawrence River and to the oil industry shipping complex in Saint John, New Brunswick owned by the Irving family empire.

Coon benefited from a multi-party vote split in Fredericton South. He won 30 per cent of the vote, knocking off the energy minister of the incumbent government. He also easily beat out a ‘star’ candidate of the New Democratic Party, Kelly Lamrock, a former education minister of the Liberal Party government who was chosen by NDP leader Dominic Cardy.

Many public education workers who are members of the CUPE union celebrated Lamrock’s election loss because of the education cuts he carried out while a Liberal minister.

The election is another electoral setback to the NDP’s efforts to refashion itself in the mold of the Labour Party in Britain. Cardy came second in his Fredericton district, with 30% of the vote. My article in July 2014 on the shift to the right of the NDP across Canada reported briefly on the Cardy-led right shift in New Brunswick, saying:

In New Brunswick, the NDP is undergoing a sharp shift to the right in which two sitting members of the provincial legislature from the Conservative and Liberal parties have been selected by the party leader as candidates in the next provincial election. The president of the NDP district association where the Conservative is to run has quit, saying he wants out of the “Un democratic party.” He says, “I’ll be back when the reign of terror is over,” referring to NDP leader Dominic Cardy’s sharp right turn.

Cardy has resigned as leader of his party, as has defeated Premier Alward.

Another hotly contested issue in the election was access to abortion services. These are sharply restricted in New Brunswick. The province pays for abortions at two hospitals, but only if a woman gets approval from two doctors who certify the procedure is “medically necessary”. 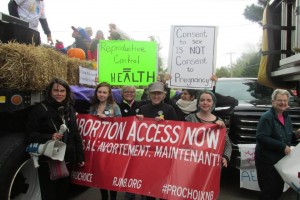 Brian Gallant followed federal Liberal leader Justin Trudeau’s lead in requiring candidates of his party to support women’s’ right to abortion access. But he says he will “review”, not abolish, the province’s restricted access to abortion services.

The province’s only abortion service clinic was forced to close in July of this year after the Alward government refused to provide financing. The clinic faced financial pressure following the death in May 2013 of Canadian abortion rights pioneer and founder of the New Brunswick clinic Henry Morgentaler.

Only one other clinic in Atlantic Canada provides abortion services—in Newfoundland. In Prince Edward Island, there is no service at all. The province’s health service will pay for an abortion in another province provided it is performed in a hospital and a doctor has provided a referral. The patient pays for travel and lodging costs. The government has turned down proposals that would have doctors from other provinces provide the service in PEI.

Writing in Rabble.ca, Tracy Glynn of the New Brunswick Media Co-Op explained how women’s rights advocates campaigned in this election:

Reproductive justice activists got busy organizing to make abortion access an election issue in the wake of the announcement of the Morgentaler Clinic closure. They released a candidates’ survey, demonstrated outside Conservative and Liberal candidates’ offices and demanded a repeal of sections of Regulation 84-20 of the Medical Services Payment Act that restrict access to publicly funded reproductive health services across the province.

“I think David Coon’s win is an amazing step forward for reproductive justice”, says Marilyn Merritt-Gray, a reproductive justice advocate and former nurse at the Morgentaler Clinic. “He is the first New Brunswick MLA to be elected with a strong and clear pro-choice position within his party’s platform. Being publicly pro-choice in New Brunswick is now an electable political stance.”

Marie-Claude Blais, the former Minister Responsible for Women’s Equality, who defended her Progressive Conservative party’s position that there were no barriers to abortion access in the province, lost her seat in Moncton Centre to Liberal Chris Collins.

Glynn also explained that the management of New Brunswick’s forest resources was a hot issue in the election. The Alward government came out with a forest management plan amounting to a stealth move towards deregulation allowing forest companies to clear-cut in areas previously set aside to protect wildlife and waters. The plan would increase by 20 per cent the amount of softwood the industry could take from government-managed land. David Coon said it amounted to giving away a “huge chunk of our forest for 25 years to J.D. Irving”, the Irving empire forestry division.

The NDP refused to criticize the Alward plan. The party said it didn’t know enough to evaluate it.

Hundreds rallied against the forest plan at the New Brunswick Legislature in May. Almost 200 forest scientists, economists and academics at the province’s universities condemned the plan in an open letter.

Coon told the Globe and Mail’s Jane Taber, “We have had a string of governments who have been unwilling to stand up to the Irving group of companies… That’s got us down a road that’s not been beneficial to the interests of New Brunswickers.”

Four months after the closing of Fredericton’s Morgentaler clinic spurred a national debate about abortion access in rural Canada, New Brunswick’s Premier has announced his government is doing away with most of a regulation that made his province one of the most difficult places in the country to end a pregnancy…

The main pro-choice group that pressed Mr. Gallant’s Liberal government to scrap regulation 84-20 of the Medical Services Payment Act praised the changes and thanked the Premier, but said the amendments do not go far enough to ensure swift, widespread access.

“It falls short in a couple of places,” said Jessi Taylor, a spokeswoman for Reproductive Justice NB. “The most obvious is in that it still restricts abortions to hospitals. That’s a huge barrier because, first of all, hospitals can make their own policies that can restrict abortions. It’s also problematic because there’s still no self-referral in a hospital.”

Go to the weblink above for the full article.

The health authorities need to offer the procedure in hospitals that won’t require people to travel too far, she said.“We should be able to access health care in our own communities,” Taylor said.

… The drug has been under review since 2012. The normal review process is a maximum of 300 days. “Clearly this limit has passed,” said Dr. Joel Lexchin, a professor in the faculty of health at York University in Toronto.

Already in use in more than 50 countries, mifepristone is considered the “gold standard” for medical abortions and is included in the World Health Organizations list of “essential medicines”…

Women in New Brunswick are getting a new, full-service health clinic that will offer abortions thanks to more than $125,000 in crowdfunded donations that poured in last spring after the province’s only freestanding abortion clinic announced it was shutting down.

The closing of the Fredericton Morgentaler clinic sparked a national debate about abortion access in rural Canada and prompted the Premier to loosen New Brunswick’s rules for the public funding of the procedure, which had been the most restrictive in the country.

But the regulatory changes that kicked in Jan. 1 do not extend to private facilities such as the new health centre that will open in the Morgentaler clinic’s old building, which means that women who end their pregnancies there will still have to pay out of their own pockets…