Trade unions in Canada have campaigned for years, sort of, in favour of a rise in the minimum wage. But in most provinces, the campaigning been limited in its goals and the tepid manner in which it has been waged. Only Ontario has seen the kind of popular mobilizations that are needed to win meaningful wage increases, and even that has had its limits. 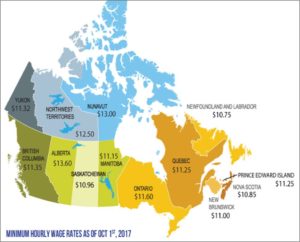 Minimum wage rates in Canada as of Oct 1, 2017 (image by Retail Council of Canada)

Proof of this comes from looking at the record of the three provincial governments that have recently promised to raise their respective minimum wages to $15 per hour. (Chart of minimum wage rates across Canada here.) The promises have deflated the trade union-led campaigns and left the minimum wage movement–potentially a powerful social force–dependent on governments fulfilling promises. That is not even to speak of the fact that with all of Canada’s large cities experiencing an acute house price bubble and related apartment rental shortages and cost spirals, a $15 per hour minimum wage has for some time been totally inadequate. 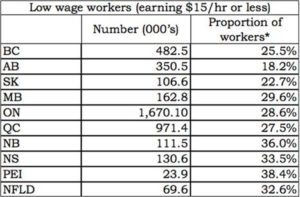 The NDP government in Alberta and the Liberal Party government in Ontario have promised to hike the minimum wage to $15 by Jan 1, 2019 and Oct 1, 2018, respectively. But the promises are opportunistically timed with the next election in each province. In other words, the promise is only as good as the prospects for re-election of the  party making the promise. While that should be a safe bet in Ontario (see: Minimum wage hike in Ontario proving wildly popular, by Martin Regg-Cohen, columnist, Toronto Star, Oct 11, 2017), an NDP re-election in Alberta in 2019 is much less certain, even with a $15 minimum wage promise in its election platform, due to the hostility of big business and campaigning of the extreme-right.

Meanwhile, last month, the new NDP government in British Columbia (which governs with the support of the Green Party) hiked the province’s minimum wage by 50 cents to $11.35. And that’s it. Further rises are frozen due to opposition by the Green Party. The government has referred the matter to a commission of study. Gone is the NDP’s election promise to raise the minimum wage to $15. Gone also is the voice of the trade unions in the province. They campaigned for years on the issue (after a fashion). As in Alberta and Ontario, the now-broken $15 per hour promise in BC was timed to coincide with the next election in the province in May 2019.

The betrayal of the $15 election promise is felt especially acutely in Vancouver region. It’s the poster child of Canada’s house price bubble. Poverty-level incomes and double-digit rises in house prices year-after-year have created conditions in Vancouver where employers are finding it increasingly difficult to find and hire people willing to live and work in the region. Even skilled workers and professionals who earn, or are promised, high, five-figure salaries are balking at living in the region. (See Help wanted: Employers in Vancouver struggle to fill food service, entry level jobs, by Randy Shore, Vancouver Sun, Oct 9, 2017, and Skilled worker shortage felt across BC, by Randy Shore, Vancouver Sun, Oct 12, 2017.)

Vancouver’s housing bubble has caught the attention of Bloomberg News. It reports on October 11 that the BC government is looking at “all options” to cool the house price bubble, citing Finance Minister Carole James. Except the government is not doing so. What is needed is affordable and decent housing for working class people. By far the most substantive policy to achieve that–for house owners and renters alike–would be to establish one or more government entities that would build and manage quality rental housing. But that would infringe on the prerogatives of the capitalist interests in the real estate industry. They are making a killing from the misery of house price inflation and costly and inadequate rental housing which their control of housing supply has caused. Such an infringement is a no-go area for the NDP government and the conservative, trade union apparatus which support it. They are beholden to the very capitalist interests which are responsible for the housing crisis in the first place.

Carole James reveals to Bloomberg why her ministry is showing new-found concern about the housing bubble. It’s not about the people who can’t afford housing; after all, her government has broken a promise to raise the minimum wage to $15.  No, as she explains, “It’s become a bigger issue–it’s become an economic issue for companies that can’t find opportunities to retain and attract employees.”

Like the rest of the world, Canadians are experiencing one of the great plagues of the late 20th century and early 21st century, which is rising poverty and social inequity.[1] This is acutely experienced in the lack of quality and affordable housing. The housing crisis, in turn, magnifies the grim and deadly drug overdose (poisoning) epidemic in British Columbia.

BC has a higher per capita death rate from drug poisoning than the United States. It’s all a result of the failed, violent, decades-old ‘war on drugs’, which governments, including the new BC NDP government, are only redoubling. Failure to provide adequate housing to citizens of Canada is thus not only a political and moral failure, it is also criminal neglect, considering that the financial and material means to provide good housing exist and the failed ‘war on drugs’ continues unabated.

We are told there is too little money to fix society’s social ills. Yet at the same time, the capitalist, military-industrial complex spends trillions of dollars on weapons every year, wages non-stop war around the globe, and threatens the very future of the very planet with its polluting excess.

Collective humanity needs to burst the kind of rhetorical story which Carole James told Bloomberg: “No one expects you can get to affordability [in housing in BC] within a year.” Oh yes we do expect that. And each year after that, too. We want life to become ever more affordable (livable). To get there, we need political parties and leaders willing to challenge the grim status quo and open the path to an anti-capitalist, socialist future.

Related reading:
A report in the Globe and Mail daily on October 12 explains how businesses in the Seattle area are adapting to the rising minimum wage headed to $15.

The case for raising the minimum wage, by Andrew Jackson (Broadbent Institute) July 7, 2017