Introduction by Roger Annis:
The detention in Canada on December 1, 2018 of Meng Wanzhou and the extradition request against her by the Trump regime in Washington is a legal battleground in the U.S.-led new cold war against China. She is the chief financial officer of China’s telecommunications giant Huawei. The company competes successfully with the largest telecoms in Western countries, so much so that the U.S., New Zealand and Australia have banned Huawei from participating in lucrative work to install next-generation ‘G5’ communications technology.

Washington’s junior partner in Ottawa is a key ally and willing accomplice in the new cold war against China and Russia. Canada can be expected to join its ‘Five Eyes’ spying partners in banning Huawei from G5 work. The political firestorm now surrounding Jody Wilson-Raybould threatens to further weaken the extradition case against Meng Wanzhou, and it heightens concerns about the extreme dangers and reckless consequences of the NATO countries’ new cold war. At a time when all the world’s attention should be focused on mitigating the global warming emergency, rising militarism and war by the Western countries is taking the world in the opposite direction.

On February 11, 2019, Jody Wilson-Raybould resigned as minister of veterans affairs, the post to which she was demoted on January 14 after she declined as justice minister to step into the minefield of assisting SNC-Lavalin in avoiding criminal corruption charges. See postscript below, consisting of a dossier of news and analysis about the scandal. 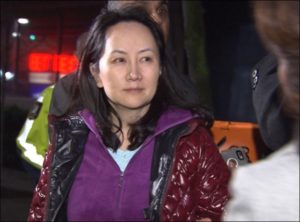 Meng Wanzhou leaves a Vancouver courtroom after being granted bail on Dec 11, 2018 (no photo credit available)

The Trudeau government in Ottawa has insisted throughout the U.S extradition case against Huawei executive Meng Wanzhou that in Canada, “the rule of law”, not political influence, determines what happens in Canadian courts. Now its former justice minister, Jody Wilson-Raybould, who oversaw the decision to detain the Huawei executive, is at the center of a political firestorm after revelations that she was the object of intense lobbying by the Prime Minister’s Office to protect the Quebec-based engineering company SNC-Lavalin from criminal accusations of corruption.

SNC executives stand accused of using bribery to win contracts in a series of countries, including in Libya prior to the overthrow of that country’s leader by a NATO military intervention in 2011 and in Montreal during the construction of the new ‘super-hospital’ in the city center. If SNC-Lavalin executives are found guilty of corruption or bribery by a criminal court in Canada, the company would be disqualified from billions of dollars of federal government-funded projects. See below a full news background on the political upheaval surrounding SNC-Lavalin and Jody Wilson-Raybould, in the form of news headlines and weblinks. 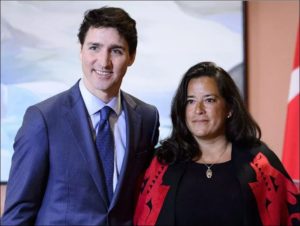 Justin Trudeau and Jody Wilson-Raybould, at her swearing in as minister of veterans affairs on Jan 14, 2019 (photo by Sean Kilpatrick, Canadian Press)

Wilson-Raybould was demoted from her justice minister post on January 14, 2019. Eleven days later, on January 25, Canada’s ambassador to China, John McCallum, was fired after stating on several occasions that the U.S. extradition request against Meng Wanzhou was politically motivated.

McCallum said the Huawei executive has been caught in the crossfire of the U.S. drive to sanction and weaken the government of Iran. He could also have mentioned how the U.S. extradition request is part of the U.S. stepping up its new cold war drive against China.

Meng Wanzhou was detained by Canadian police on December 1, 2018 and is currently under house arrest in Vancouver as a Canadian court determines a recommendation to be made to the justice minister, that is, to the minister who was appointed by Justin Trudeau on January 14 to replace Wilson-Raybould.

The justice ministry under Wilson-Raybould’s direction had resisted entreaties by Trudeau’s office to go easy on SNC-Lavalin. She and her ministry led the charge in the extradition request against Meng Wanzhou.

Canada’s extradition treaty with the U.S. is decades old. An individual can be extradited from either country if alleged criminal activity is recognized as criminal in both countries. In Canada, the final decision is in the hands of the minister of justice, taking into account the recommendation of a court. The U.S. may request the provisional arrest of the person in question. The latter option was taken in the case of Meng Wanzhou. Police determined that “urgency has been established”. Then-Justice Minister Jody Raybould-Wilson stated at the time that the decision to seek an arrest warrant was made “without any political interference or direction”. (Global TV News, Dec 12, 2019) ]

Jody Wilson-Raybould was the first Indigenous person to serve as justice minister in Canada. One of her legacies is Bill C46, consisting of changes to the Criminal Code of Canada which took effect in December 2018 and give police unprecedented powers to stop drivers and take breathalyzer and DNA (saliva) tests, in the name of combatting driving while impaired by alcohol or marijuana. Whereas previously police had to provide courts with evidence of ‘reasonable cause’ for stopping drivers and taking breathalyzer tests or searching vehicles, Bill C46 eliminates that provision. It adds the power to take DNA tests. The increased police powers are unlikely to survive court appeals, but that will take years to play out. Racial profiling by police in Canada is already proven to be widespread, even as police say they are taking steps to end the practice. Racial profiling can be expected to increase due to Bill C46.

The minister was also a loyal advocate of the pro-fossil fuel, pro-tar sands pipeline policies of the party and government she serves. This places her at odds with the overwhelming sentiment of Canada’s First Nations people and the views of the majority of the constituents of her electoral district in downtown Vancouver. Instead, she represents the fossil fuel magnates and the thin crust of First Nations leaders who are buying into the pro-fossil fuel death cult of Canada’s economic elite.

This commentary by two Toronto lawyers published in the Toronto Star on January 16 (also weblinked in the postscript below) describes as a lamentable failure the legacy of Jody Wilson-Raybould as justice minister and first Indigenous person to serve in that post.

*  Trudeau pushes back on SNC-Lavalin, says he was ‘surprised and disappointed’ by Jody Wilson-Raybould’s resignation, news report by CBC News, Jan 12, 2019
*  Trudeau goes on the attack after former justice minister Jody Wilson-Raybould’s shock resignation, by Maura Forrest, The National Post, Feb 12, 2019
*  Another day at the office for a government that looks increasingly grubby, by John Ivison, conservative columnist, The National Post, Jan 12, 2019
*  Wilson-Raybould’s departure is a calamity for Trudeau’s Liberals, by John Ibbitson, columnist, Globe and Mail, Wednesday, Feb 12, 2019  (subscriber only)

“Government by cabinet is back,” Justin Trudeau promised on his sunny first day as Prime Minister in November, 2015. But Mr. Trudeau broke that promise. Instead, he allowed a close circle of unelected advisers to direct, control and even bully cabinet ministers and MPs alike. On Tuesday, the government paid the price.

Jody Wilson-Raybould’s resignation is a calamity for the Liberals. For one thing, she has made Mr. Trudeau look like a fool. Less than 24 hours earlier, he had expressed full confidence in the minister, saying “her presence in cabinet should actually speak for itself.” Her resignation hours later spoke louder. For another, her departure is politically damaging…

Ms. Wilson-Raybould’s resignation could be just as damaging. For one thing, her decision appears to confirm that officials in the Prime Minister’s Office put pressure on her to cut a deal with SNC-Lavalin, which faces corruption charges, and then removed her from the Justice portfolio when she refused. This from a government that trumpets its scrupulous observance of the rule of law.

The fact that she stood up to the Prime Minister’s advisers, and was punished for it, undermines Liberal claims that women are equal and respected within the government. The resignation of the first Indigenous person to serve as justice minister also tarnishes the government’s record on Indigenous issues. And perhaps the saddest thing of all: The next Minister of Veterans Affairs will be the fourth appointed by this government, underscoring the low value placed on the portfolio, and on the needs of veterans…

*  Tale of prosecutorial interference is a mortal threat to the Trudeau brand, by Chris Selley, columnist, National Post, Thursday, Feb 7, 2019
*  Wilson-Raybould’s resignation from cabinet was overdue, by Thomas Walkom, columnist, Toronto Star, Feb. 12, 2019
*  Is the SNC-Lavalin scandal’s biggest victim Trudeau’s relationship with Indigenous people?, by Tanya Talaga, Indigenous issues columnist, Toronto Star, Feb 12, 2019  (title of the Star‘s print edition: ‘Not all of us are ‘puzzled’ by this Indigenous leader’s resignation’)

… Jody Wilson-Raybould, a We Wai Kai First Nation woman, was as justice minister and the top lawyer in a country that still has the paternalistic Indian Act on its books, that consistently fails to properly “consult” Indigenous communities on decisions that profoundly affect them, that claims it desperately wants to reconcile yet fights not to deliver equitable health, education and social services to Indigenous children. Perhaps, it seemed for a moment, she could change history. But it wasn’t long before that old familiar feeling of doubt crept in.

… There was double speak on what nation-to-nation actually meant. There was little progress on bringing clean drinking water to First Nations. There was big talk but no action on revising the Indian Act. More inadequate consultations. And on and on. It must have been increasingly uncomfortable for Wilson-Raybould in cabinet, watching as the government ignored its promises on making First Nations, Métis and Inuit proper partners in everything from drafting legislation to fulfilling funding commitments.

*  As the SNC-Lavalin corruption storm rages on, is prosecutorial independence at risk?, op-ed commentary by Errol Mendes, Globe and Mail, Feb 12, 2019  (Errol Mendes is a professor of constitutional and international law at the University of Ottawa and the president of the International Commission of Jurists, Canada.)
*  Billions at stake for SNC-Lavalin — corruption conviction would bar firm from federal contracts for 10 years, by Jesse Snyder and Gabriel Friedman, National Post, Feb 7, 2019
*  SNC-Lavalin’s failure to secure deferred prosecution comes after years of legal fights, lobbying blitz, by Jesse Snyder and Gabriel Friedman, National Post, Feb 8, 2019
*  SNC-Lavalin may face fraud charges connected to work on Montreal’s Jacques Cartier Bridge, by Christopher Reynolds, The Canadian Press, Feb 11, 2019
*  Jody Wilson-Raybould’s regrettable legacy as justice minister, op-ed commentary by Daniel Brown and Michael Lacy, Toronto Star, Jan. 16, 2019  (Daniel Brown and Michael Lacy are, respectively, vice-president and president of the Criminal Lawyers’ Association, in Toronto.)  Jody Wilson-Raybould swept into the Department of Justice on a wave of high hopes and lofty expectations. With the tide now receding on her three-year tenure as minister of justice, she leaves a residue of disappointment and a legion of perplexed supporters wondering what went so wrong…
*  Meng Wanzhou’s extradition to the U.S. is far from slam dunk, say lawyers, experts, by James McCarten, The Canadian Press, Feb 4, 2019