The ‘Paradise Papers’ is a global investigation into the offshore activities of some of the world’s most powerful people and companies. The papers were leaked to the German newspaper  Süddeutsche Zeitung and shared with the International Consortium of Investigative Journalists. From there, investigations were conducted by journalists in 67 countries. 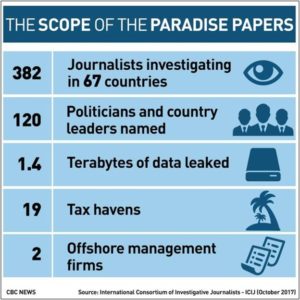 Although a small number of wealthy Russians are named in the ‘Paradise Papers’ reports, corporate media in the West, including the CBC, are devoting outsized play to ‘Russia’ themes in its reporting. This is a classic case of ‘changing the channel’ of a major news story; in this case, deflecting attention from the corruption and anti-social conduct of the owners, paymasters or beholden interests of the corporate media. This also reflects the new media landscape of the new McCarthyism by Western governments and corporate elites. Media servants are directed as follows: ‘If it’s’ bad news, find us a Russia link and play that up. It doesn’t matter if it is true; we have the money and power to make it true.’

Canada is one of the top countries identified in the Paradise Papers where wealthy people use offshore tax havens. It is the third-highest country named in the Paradise Papers, after the U.S. and Britain. A top advisor and fundraiser for Prime Minister Justin Trudeau and his Liberal Party, Stephen Bronfman,  is frequently named in the papers as a wealthy individual who avoids paying taxes by placing his wealth in offshore tax havens. But Trudeau has leapt to his defense (CBC News story here). The editors of the conservative Globe and Mail daily newspaper have gone so far as to editorialize in Bronfman’s defense. 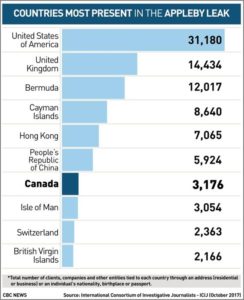 Several of Canada’s largest media outlets–the Globe and Mail and the Postmedia newspaper chain–are barely reporting the Paradise Papers, including the battle being waged by the Canada Revenue Agency to keep secret its kid-glove treatment of wealthy corporations and individuals in Canada using tax havens to shield their wealth. A November 6 report in the Toronto Star (one of two media outlets in Canada which formally joined the media consortium investigating the Paradise Papers) begins:

Over the past six years, three different parliamentary budget officers — mandated to report to parliament on matters of fiscal importance — have requested federal data to calculate the difference between taxes due and those actually collected. The records required to find the figure — called the tax gap — never came.

Dozens of pages of correspondence between the parliamentary budget officers and Canada Revenue Agency (CRA) officials, obtained by a Toronto Star/CBC investigation, detail a five-year battle for data that has now concluded in a stalemate — and no information shared…

The Canadian government collected approximately $190 billion in personal and corporate taxes in the fiscal year ended March 31, 2016. The best guess of journalists of how much taxation which wealthy Canadians and companies avoided that year by using offshore havens is $6 to $8 billion. That’s on top of the estimated $9 billion in tax revenue (year 2014) which the CRA estimates was lost to the underground economy and other unpaid taxes.

Enclosed below are commentaries published in the UK Guardian on the Paradise Papers.

The public will get a glimpse at the tens of thousands of names — including those of more than 3,000 Canadians and Canadian companies — in the Paradise Papers starting today. Key information from the huge leak of tax-haven financial records, including the names of offshore companies and the people behind them, is being made public by the International Consortium of Investigative Journalists (ICIJ), the Washington-based group that co-ordinated global reporting on the documents…

Why have we built a paradise for offshore billionaires?

It’s not enough to say, in response to the Paradise Papers revelations, that we already knew that rich people parked their money in offshore tax havens, where their piles accumulate far from the scrutiny of our government. Nor is it enough to say that we were already aware that we live in a time of “inequality.”

What we have learned this week is the clinical definition of the word. What we have learned is how much the rich and the virtuous have been hiding away and where they’re hiding it. Yes, there are sinister-looking Russian capitalists involved. But there’s also our favorite actors and singers. Our beloved alma mater, supposedly a charitable institution. Everyone with money seems to be in on it.

We’re also learning that maybe we’ve had it backwards all along. Tax havens on some tropical island aren’t some sideshow to western capitalism; they are a central reality. Those hidden billions are like an unseen planet whose gravity is pulling our politics and our economy always in a certain direction. And this week we finally began to understand what that uncharted planet looks like; we started to grasp its mass and its power.

Think about it like this. For decades, Americans have been erupting in anger at what they can see happening to their beloved middle-class world. We think we know what the culprit is; we can see it vaguely through a darkened glass. It’s “elitism”. It’s a “rigged system”. It’s people who think they’re better than us. And for decades, we have lashed out. At the immigrant next door. At Jews. At Muslims. At school teachers. At public workers who are still paid a decent wage. Our fury, unrelenting, grows and grows.

We revolt, but it turns out we have chosen the wrong political leader. We revolt again; this time, the leader is even worse.

This week, we are coming face to face with a big part of the right answer: it’s that the celebrities and business leaders we have raised up above ourselves would like to have nothing to do with us. Yes, they are grateful for the protection of our laws. Yes, they like having the police and the marine corps on hand to defend their property.

Yes, they eat our food and breathe our air and expect us to keep these pure and healthy; they demand that we get educated before we may come and work for them, and for that purpose they expect us to pay for a vast system of public schools. They also expect us to watch their movies, to buy their products, to use their software. They expect our (slowly declining) middle class to be their loyal customers.

But those celebrities and business types would prefer not to do what it takes to support all this. That burden’s on us. Oh, they’re happy to haul billions out of our economy and use us up in the workplace, but maintaining the machinery that keeps it all running – that’s on us.

I don’t want to go too far here. I know that what the billionaires and the celebrities have done is legal. They merely took advantage of the system. It’s the system itself, and the way it was deliberately constructed to achieve these awful ends, that should be the target of our fury.

For decades, Americans have lashed out against taxation because they were told that cutting taxes would give people an incentive to work harder and thus make the American economy flourish. Our populist leaders told us this – they’re telling us this still, as they reform taxes in Washington – and they rolled back the income tax, they crusaded against the estate tax, and they worked to keep our government from taking action against offshore tax havens.

In reality, though, it was never about us and our economy at all. Today it is obvious that all of this had only one rationale: to raise up a class of supermen above us. It had nothing to do with jobs or growth. Or freedom either. The only person’s freedom to be enhanced by these tax havens was the billionaire’s freedom. It was all to make his life even better, not ours.

Think, for a moment, of how this country has been starved so the holders of these offshore accounts might enjoy their private jets in peace. Think of what we might have done with the sums we have lost to these tax strategies over the decades. All the crumbling infrastructure that politicians love to complain about: it should have – and could have – been fixed long ago.

But no. Instead, America chose a different project. Our leaders raised up a tiny class of otherworldly individuals and built a paradise for them, made their lives supremely delicious. Today they hold unimaginable and unaccountable power.

We endure potholes and live in fear of collapsing highway bridges because our leaders wanted these very special people to have an even larger second yacht. Our kids sit in overcrowded classrooms in underfunded schools so that a handful of exalted individuals can relax on their own private beach.

Today it is these same golden figures with their offshore billions who host the fundraisers, hire the lobbyists, bankroll the think tanks and subsidize the artists and intellectuals.

This is their democracy today. We just happen to live in it.

Thomas Frank is an American political analyst and historian. His books include What’s the Matter With Kansas?. His latest book is Listen, Liberal: or, What Ever Happened to the Party of the People?

Nearly ten per cent of the world’s wealth is held offshore by a few individuals, writes economics professor Gabriel Zucman

End these offshore games or our democracy will die, commentary by Aditya Chakrabortty, The Guardian, Nov 7, 2017

Letter to the Guardian editor:

It seems appropriate for the release of the Paradise Papers [November 7, 2017] to coincide with the centenary of the Russian revolution.
John Pelling
Coddenham, Suffolk