Olivia Chow and the vanishing NDP in Toronto 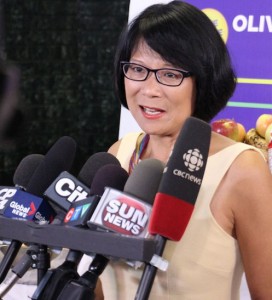 Once the strong front-runner in the Toronto mayoral race, Olivia Chow is now locked in the political fight of her life with only a few weeks left to revive her faltering campaign. Recent polls place Chow, a former high-profile New Democrat MP, in third place behind both John Tory and incumbent mayor Rob Ford. So great has been her fall that even Chow has started to call herself “the underdog” in the race.

It’s a stunning position for Chow to find herself in, especially in light of how far ahead she was of her opponents in polls earlier this year. It’s even more shocking given the fact she now lags behind Ford, the disgraced mayor who spent weeks in a rehab clinic for drug and alcohol abuse.

Also in the Toronto Star: Those waiting for Olivia Chow miracle are running out of time, by columnist Royson James, Sept 6, 2014

The latest survey, released Tuesday by Nanos Research, showed Tory with 42 per cent support, Ford at 28 per cent, Chow with 26 per cent and former city councillor David Soknacki with 3 per cent.

Chow’s troubles in the polls can be partly blamed on a weak public speaking style, her opponents’ portrayal of her as a “tax-and-spend lefty” and a platform focused on 1,000 points of light rather than two or three key themes that matter to voters. But a more significant problem facing Chow is that the traditional NDP base in Toronto has been vanishing in recent years.

This is important because Chow’s strategy relies heavily on a huge NDP turnout on the Oct. 27 election day. Given her long history in the party, Chow is considered “the NDP candidate” in this race, despite her efforts to portray her campaign as being free of party politics.

Indeed, Chow is haunted by the NDP’s miserable results in Toronto in the Ontario provincial election in June and in four federal byelections since the 2011 general election.

Signs of the NDP’s fading level of voter support in Toronto are everywhere. In the Ontario election, the Liberals trounced the NDP in Toronto, reducing the NDP to just two seats. The Liberals even captured two long-standing NDP ridings, including Trinity-Spadina (the area Chow represented as a federal MP for eight years) where veteran NDP MPP Rosario Marchese lost by a whopping 8,400 votes.

The Liberals increased their vote in all 23 ridings that cover the 416 area, while the NDP turnout dropped in more than half of those same ridings. In fact, NDP candidates finished a distant third behind Conservatives in 11 ridings.

On the federal scene, the NDP is faring just as badly in the city. The party’s biggest blow came when the NDP failed to hold Chow’s old riding of Trinity-Spadina in a June 30 byelection. Liberal candidate Adam Vaughan captured 53.7 per cent of the vote while the NDP’s Joe Cressy was backed by 34 per cent. In the 2011 federal election, Chow won with 54.5 per cent of the votes.

Earlier, in last year’s byelection in Toronto Centre, the Liberals widened the margin of victory between themselves and the NDP compared to the 2011 general election.

The NDP did win the fourth federal byelection, holding on to the late NDP leader Jack Layton’s riding of Toronto-Danforth in 2012. Even in that contest, though, the Liberals dramatically narrowed the gap with the NDP.

Combined, these results signal major trouble for Chow on Oct. 27. To win, she must hang onto her NDP base, albeit shrunken, while winning over a vast number of traditional Liberal voters who might be thinking of voting for Tory.

Like Tory, she has recruited senior Liberals to her campaign, including self-styled “progressives” such as former Ontario Liberal cabinet minister George Smitherman and former RBC executive Charles Coffey.

Chow also draws some solace from two polls earlier in the campaign that showed she had slightly more support of provincial and federal Liberal voters than Tory. Both polls, however, were conducted before more recent surveys that put Chow in third place.

With seven weeks to go before voting day, Chow still has time to turn the polls around. To do that, she will unveil more “progressive” measures aimed at appealing to left-of-centre voters. The first of these came Tuesday when she proposed a scheme to raise land transfer taxes on homes sold for more than $2 million and use the money to help pay for youth nutrition programs and more buses.

Chow is praying proposals like this can win over Liberals who are wavering between herself and Tory. If she fails to do so, she will lose and be left wondering: where did all the NDP voters in Toronto go?