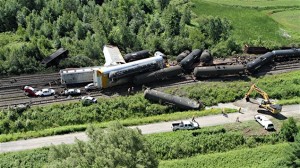 Yesterday at 4 am, a 26-car CN train derailed on the main line that connects Toronto and Montreal (and connects the Alberta tar sands and North Dakota Bakken oil field to Montreal via Toronto). The train was reportedly traveling eastbound at 100 kph (60 mph).

The derailed cars were:

The derailment has caused VIA Rail passenger service between Toronto-Montreal and Toronto-Ottawa to be cancelled until further notice. Bus service is replacing the trains.

The accident occurred in the outskirts of the small city of Brockville, Ontario, population 40,000. It lies on the St. Lawrence River about two hours drive west of Montreal and adjacent to Highway 401, the main highway that connects Montreal through Ontario all the way to the U.S. border at Detroit. It is the same route and direction taken by the fateful train that exploded in Lac Mégantic, Quebec just over one year ago.

A full Toronto Star report is here, headlined, Brockville train derailment ‘could have been a lot worse’.