Something remarkable took place this year in Canada as the country officially marked 150 years since its constitutional founding on July 1, 1867. The official celebrations went rather awry. They were obliged to hear and take account of the voices of First Nations people and their allies saying, ‘Sorry, but we have nothing to celebrate. For us, Canada has been 150 years of hell.’ 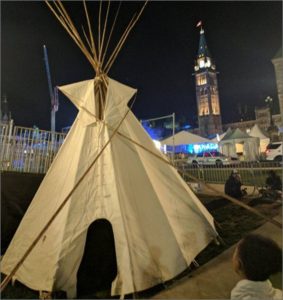 The impact of the dissent on official celebrations was on full, national display beginning June 27 when a small number of First Nations protesters arrived late that day on Parliament Hill in Ottawa and set up a teepee to serve as a visible beacon of protest leading up to the large, official, Canada Day celebration to take place on the Hill on July 1. Tens of thousands of people were anticipated on July 1 for a day of music and political speeches organized by the federal government.[1]

The First Nations protesters called the teepee a ‘reoccupation’ of unceded First Nations territory. They were sending a loud and clear message to Canadians that the official message of the country’s history was flawed and even racist.

Federal police (the RCMP) tried to break up the protest and the erecting of the teepee on June 27. Nine people were arrested. But the exercise quickly backfired as it became national news. The police backed away. The arrested were released, and following some 24 hours of negotiations with the police, the teepee and related activities were allowed to go ahead and even given a visibly prominent location. The protest became part of the backdrop to the official July celebration. 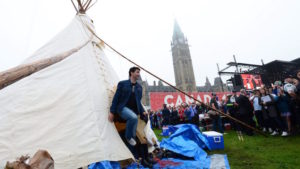 On June 30, Prime Minister Justin Trudeau and his wife Sophie paid a visit to the teepee and engaged in a 40-minute discussion inside with a small number of the activists. It was a good public relations move. Trudeau and his Liberal Party government made a lot of promises to improve the lot of First Nations people when they unseated the Stephen Harper-led Conservative Party regime in the October 2015 national election. But since then, the Liberals have seriously disappointed those who believed their sugar-coated words.

Among the few positive measures taken by the new government has been the convening of an official inquiry into the more than 1,100 estimated Aboriginal women and girls who have gone missing and are presumed murdered during the past 30 to 40 years. Police and courts stand accused of ignoring or downplaying this national tragedy.

The official inquiry is supposed to deliver an initial report of its work this autumn, but it has come under extensive criticism for the slow pace of its work and for delaying receipt of testimonies of relatives of presumed or proven victims. In the province of British Columbia, many of the recommendations of an 2010-12 inquiry (here, and here) into missing Aboriginal women in the province in 2010-12 have not been implemented, including one recommending a public transportation system along Highway 16 (the ‘Highway of Tears‘) in the north of the province where many Aboriginal women rely on hitchhiking for travel and at least 21 have gone missing. (Public transit service along a section of the highway finally opened in June 2017, some ten years after it was first demanded.)

One advantage for Trudeau and the government in making its public relations move was the still diffuse character of First Nations political protest in Canada. Indigenous people make up some 3.5 per cent of the Canadian population of 36 million (including hundreds of thousands of people of mixed Métis ancestry). Their historic demands are coming more and more to the fore and gaining broad public support. The demands include political, economic and territorial sovereignty; improvements to harsh conditions in housing, education, health indicators and employment on First Nations territories and in Canada’s urban centers (where half the Indigenous population lives); ending the widespread despoliation of the natural environment across Canada.

But the political movements fighting for such demands are still effectively ignored or downplayed by federal and provincial governments. For example, although in May 2016 the Trudeau government removed Canada’s formal opposition to the 2007 United Nations Declaration on the Rights of Indigenous Peoples, it is stalling on enshrining the UN declaration into Canadian law. One of the government’s objections is Article 19 of UNDRIP, obliging it to seek consent of First Nations peoples to major public (social) policy and to economic exploitation of natural resources. The government opposes any notion of First Nations veto.

A current challenge on the road to First Nations empowerment is the contest for a new leader of the New Democratic Party. It’s the third party in Parliament and the most vocally sympathetic to First Nations causes.

The NDP contest features Trudeauesque promises by the five leadership candidates on social, political and environmental issues. Meanwhile, the record of the NDP in office is not a good one, not qualitatively different from that of the Liberals or the pre-Harper Conservatives.

The NDP government in Alberta elected in May 2015, for example, has been the most pro-fossil fuel voice in the country, championing in particular one of the world’s most disastrous fossil fuel projects—extraction of the Alberta tar sands.

The newly-elected minority NDP government in British Columbia, to take another example, inherits two large climate-wrecking projects facing strenuous opposition by affected First Nations—the proposed ‘Trans Mountain’ pipeline to transport Alberta tar sands bitumen to an export terminal in the Port of Vancouver, and the multi-billion dollar ‘Site C’ hydroelectric dam on the Peace River in the northeast of the province. The new government is under intense pressure from the Trudeau government to approve the pipeline, while hundreds of millions of dollars have already been spent on constructing the Site C dam. The dam’s estimated final cost has ballooned to $9 billion and its eventual profitability is dependent on selling its electricity for tar sands extraction in Alberta and natural gas fracking as well as mineral mining in BC.

The new government says it is studying whether to allow these projects to proceed.

A party of the left for Canada?

It’s been several decades since the political left across Canada has made any moves towards forging a political party to champion a truly pro-working class, pro-First Nations rights program. In a world threatened by rising war and militarism, global warming and growing social inequity, such a party is urgently needed in order to present a genuinely left-wing program for Canada. As well, it could act as a force to pressure NDP to the left in circumstances where the staid  party leadership group has little such pressure operating on it.

Concerning foreign policy, Canada is an enthusiastic partner in the war course of the NATO military alliance. This includes NATO’s threats against the government and people of Russia and its increasing, direct military intervention into Russia’s neighbouring countries in eastern Europe (Ukraine, Baltic republics). Where does the NDP stand? Party leader Tom Mulcair uttered these infamous words during an August 2015 election debate: “We stand with NATO.” The NDP continues to support the economic and political sanctions against Russia, which are a dangerous, potential prelude to a disastrous war by NATO. It backs Israel’s denial of the rights of the Palestinian people and it backs Canada’s military intervention alongside the U.S. in northern Iraq and Syria.

On global warming, the NDP endorses the United Nations goal of a global temperature rise of two degrees. That goal is not only disastrous in its own right for hundreds of millions of the world’s poorest people, it also peddles the dangerous illusion that such a limit is feasible under the current economic and political order.

The building of a left-wing party should be all the more welcome considering the early successes of Quebec solidaire, the broad left party that was founded in Quebec in 2007. But that positive example received no uptake elsewhere in Canada. Quebec solidaire needs like-minded allies and party-building projects considering the unlikely prospects for progressive government in Quebec so long as powerful and unfriendly governments rule in neighbouring Canada and the United States.

Note:
[1] Canada Day festivities in Ottawa would include a further complication–an official visit by the heir to the British crown, Prince Charles, and his wife Camila. That amounted to an insult to the French-language people of the province of Quebec, whose ancestors were conquered and colonized by Britain in 1759 and who were later dealt a subordinate status in Canada’s 1867 constitution.

A parallel conquest of French-speaking settlers by Britain occurred in 1755 as part of the Seven Years War between Britain and France. Upon the war’s ending, Britain expelled the Acadien settlers from the future provinces of New Brunswick, Nova Scotia and Prince Edward Island. At the time, they numbered some 12,000. (Wikipedia) That action became known as Le grande dérangement (The Great Unsettling). Most of the expelled were forcibly transported to the then-French colony of Louisiana. In 1803, that territory was purchased from France by the United States. (Wikipedia)

Today, there are approximately 50,000 people of Acadien origin in Atlantic (Maritime) Canada. They are descendants of those who escaped deportation in 1755 or who managed by hook or by crook to return to their adopted homeland.

* An article in the conservative Globe and Mail daily newspaper on July 1 explains how and why First Nations rights came to occupy such a prominent place in Canada’s official, 150-year celebrations:
‘A horrible history’: Four Indigenous views on ‘Canada 150’.

* A commentary appearing in the conservative National Post daily complains about the political disarray which befell the official celebrations of Canada’s 150-year anniversary:
Facile ‘Canada 150’ celebration deserves to be disrupted.

* An article in the monthly Maclean’s magazine on March 13, 2017 explained how the city of Vancouver decided to ‘rebrand’ the official, colonizing-centric ‘Canada 150’ celebrations and instead go with a ‘Canada 150+’  theme that would take account of the history predating the arrival of European settlers to northern North America some 400 years ago:
How Indigenous people are rebranding ‘Canada 150’.