A Socialist In Canada, Dec 11, 2017  (extensive related readings further below)

‘The development of nuclear weapons signifies not a country’s elevation to greatness, but its descent to the darkest depths of depravity.’

‘All responsible leaders will sign this treaty. And history will judge harshly those who reject it.’ 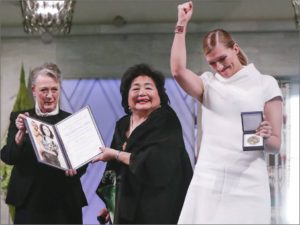 The speech texts are published in the Japanese daily The Mainichi on Dec 11, 2017.

My fellow campaigners, here and throughout the world,

It is a great privilege to accept this award, together with Beatrice, on behalf of all the remarkable human beings who form the ICAN movement. You each give me such tremendous hope that we can — and will — bring the era of nuclear weapons to an end.

I speak as a member of the family of hibakusha — those of us who, by some miraculous chance, survived the atomic bombings of Hiroshima and Nagasaki. For more than seven decades, we have worked for the total abolition of nuclear weapons.

We have stood in solidarity with those harmed by the production and testing of these horrific weapons around the world. People from places with long-forgotten names, like Moruroa, Ekker, Semipalatinsk, Maralinga, Bikini. People whose lands and seas were irradiated, whose bodies were experimented upon, whose cultures were forever disrupted.

We were not content to be victims. We refused to wait for an immediate fiery end or the slow poisoning of our world. We refused to sit idly in terror as the so-called great powers took us past nuclear dusk and brought us recklessly close to nuclear midnight. We rose up. We shared our stories of survival. We said: humanity and nuclear weapons cannot coexist.

I was just 13 years old when the United States dropped the first atomic bomb, on my city Hiroshima. I still vividly remember that morning. At 8:15, I saw a blinding bluish-white flash from the window. I remember having the sensation of floating in the air.

As I regained consciousness in the silence and darkness, I found myself pinned by the collapsed building. I began to hear my classmates’ faint cries: “Mother, help me. God, help me.”

Then, suddenly, I felt hands touching my left shoulder, and heard a man saying: “Don’t give up! Keep pushing! I am trying to free you. See the light coming through that opening? Crawl towards it as quickly as you can.” As I crawled out, the ruins were on fire. Most of my classmates in that building were burned to death alive. I saw all around me utter, unimaginable devastation.

Processions of ghostly figures shuffled by. Grotesquely wounded people, they were bleeding, burnt, blackened and swollen. Parts of their bodies were missing. Flesh and skin hung from their bones. Some with their eyeballs hanging in their hands. Some with their bellies burst open, their intestines hanging out. The foul stench of burnt human flesh filled the air.

Thus, with one bomb my beloved city was obliterated. Most of its residents were civilians who were incinerated, vaporized, carbonized — among them, members of my own family and 351 of my schoolmates.

In the weeks, months and years that followed, many thousands more would die, often in random and mysterious ways, from the delayed effects of radiation. Still to this day, radiation is killing survivors.

Whenever I remember Hiroshima, the first image that comes to mind is of my four-year-old nephew, Eiji – his little body transformed into an unrecognizable melted chunk of flesh. He kept begging for water in a faint voice until his death released him from agony.

To me, he came to represent all the innocent children of the world, threatened as they are at this very moment by nuclear weapons. Every second of every day, nuclear weapons endanger everyone we love and everything we hold dear. We must not tolerate this insanity any longer.

Through our agony and the sheer struggle to survive — and to rebuild our lives from the ashes — we hibakusha became convinced that we must warn the world about these apocalyptic weapons. Time and again, we shared our testimonies.

But still some refused to see Hiroshima and Nagasaki as atrocities — as war crimes. They accepted the propaganda that these were “good bombs” that had ended a “just war”. It was this myth that led to the disastrous nuclear arms race — a race that continues to this day.

Nine nations still threaten to incinerate entire cities, to destroy life on earth, to make our beautiful world uninhabitable for future generations. The development of nuclear weapons signifies not a country’s elevation to greatness, but its descent to the darkest depths of depravity. These weapons are not a necessary evil; they are the ultimate evil.

On the seventh of July this year, I was overwhelmed with joy when a great majority of the world’s nations voted to adopt the Treaty on the Prohibition of Nuclear Weapons. Having witnessed humanity at its worst, I witnessed, that day, humanity at its best. We hibakusha had been waiting for the ban for seventy-two years. Let this be the beginning of the end of nuclear weapons.

All responsible leaders will sign this treaty. And history will judge harshly those who reject it. No longer shall their abstract theories mask the genocidal reality of their practices. No longer shall “deterrence” be viewed as anything but a deterrent to disarmament. No longer shall we live under a mushroom cloud of fear.

To the officials of nuclear-armed nations — and to their accomplices under the so-called “nuclear umbrella” — I say this: Listen to our testimony. Heed our warning. And know that your actions are consequential. You are each an integral part of a system of violence that is endangering humankind. Let us all be alert to the banality of evil.

To every president and prime minister of every nation of the world, I beseech you: Join this treaty; forever eradicate the threat of nuclear annihilation.

When I was a 13-year-old girl, trapped in the smouldering rubble, I kept pushing. I kept moving toward the light. And I survived. Our light now is the ban treaty. To all in this hall and all listening around the world, I repeat those words that I heard called to me in the ruins of Hiroshima: “Don’t give up! Keep pushing! See the light? Crawl towards it.”

Tonight, as we march through the streets of Oslo with torches aflame, let us follow each other out of the dark night of nuclear terror. No matter what obstacles we face, we will keep moving and keep pushing and keep sharing this light with others. This is our passion and commitment for our one precious world to survive.

Setsuko Thurlow was born in 1932, survived the atomic bombing of Hiroshima, Japan on August 6, 1945 and resides in Canada.

Note by Roger Annis:
Western mainstream media is boycotting coverage of the Nobel Peace Prize ceremony which took place in Oslo, Norway on Sunday, December 10, 2017. This follows the lead of the governments of the U.S., Britain and France, which snubbed the ceremony by sending low-level diplomatic representatives. The three countries also boycotted the meeting of the UN General Assembly on July 7, 2017 which approved the Treaty on the Prohibition of Nuclear Weapons (text of treaty below).

Russia and China boycotted the July 7 General Assembly meeting. Their reasons for doing so are different from the three countries named above. The Russia Federation and its Soviet Union predecessor long worked for reduction if not elimination of nuclear weapons. Russia’s stance on Treaty on the Prohibition of Nuclear Weapons was explained at length by Russian Foreign Minister Sergei Lavrov in a speech to the Moscow Nonproliferation Conference on October 20, 2017. Read his comments here on the website of the Foreign Ministry of Russia. Excerpt:

… The treaty proponents, including the International Campaign to Abolish Nuclear Weapons (ICAN), which has been awarded the Nobel Peace Prize for 2017, appear to be guided by a noble goal of prohibiting nuclear weapons as soon as possible. However, it should be remembered that total denuclearisation is only possible within the framework of universal and total disarmament in conditions of equal and indivisible security for all states, including nuclear countries, as this is stipulated in the Treaty on the Non-Proliferation of Nuclear Weapons (NPT)… 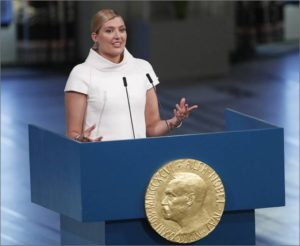 ‘We have avoided nuclear war not through prudent leadership but good fortune. Sooner or later, if we fail to act, our luck will run out.’

*  Draft treaty on the prohibition of nuclear weapons, approved by the UN General Assembly on July 7, 2017, click to open the ten-page document in pdf format.

OSLO — The anti-nuclear group which won the 2017 Nobel Peace Prize accused the United States, Britain and France on Wednesday of snubbing its disarmament work by planning to send only second-rank diplomats to the award ceremony next month.

“It’s some kind of protest against the Nobel Peace Prize,” Beatrice Fihn, director of the International Campaign to Abolish Nuclear Weapons (ICAN), told Reuters of a plan by the three nations to send only deputy chiefs of mission.

“They like their nuclear weapons very much and don’t like it when we try to ban them,” she said, accusing the three of wrongly opposing ICAN’s work “when North Korea and the United States are exchanging threats to use nuclear weapons”.

The annual December 10 Nobel prize ceremony in Oslo, attended by King Harald and Queen Sonja, is the highlight of the diplomatic calendar in Norway. The prize comprises a diploma, a gold medal and a cheque for $1.1 million.

Olav Njoelstad, director of the Norwegian Nobel Institute, confirmed the three nations would send only deputies. He said the awards committee always preferred to see chiefs of mission.

“That being said, we are neither surprised nor offended by the fact that sometime foreign governments prefer to stay away from the ceremony in protest or, as in this case, because they prefer to be represented by their deputy chiefs of mission,” he told Reuters.

“The Nobel Peace Prize is, after all, a political prize. The Norwegian Nobel Committee takes notice of the joint decision of the British, French and U.S. embassies,” he said.

The British embassy confirmed it was sending a deputy ambassador and said in a statement “the UK is committed to the long-term goal of a world without nuclear weapons.

“We share this goal with our partners across the international community including U.S. and France.”

The U.S. and French embassies were not immediately available for comment. Last month, U.S. President Donald Trump nominated Kenneth Braithwaite to the post of ambassador in Oslo, currently held by an acting ambassador.

ICAN, a coalition of grassroots non-government organizations in more than 100 nations, campaigned successfully for a U.N. Treaty on the Prohibition of Nuclear Weapons, which was adopted by 122 nations in July this year.

But the agreement is not signed by – and would not apply to – any of the states that already have nuclear arms, which include the United States, Russia, China, Britain and France, as well as India, Pakistan and North Korea.

Israel neither confirms nor denies the widespread assumption that it controls the Middle East’s only nuclear arsenal.

It was not clear whether other nuclear powers would send Oslo ambassadors to the Nobel ceremony.

The absence of ambassadors from the United States, Britain and France “is disappointing but at the same time we are focused on getting a majority of states in the world to join this treaty,” Fihn said.

She said the three nuclear states were exerting pressure on other nations “not to engage in this treaty”.