No way to remember: Review of Samir Amin’s new book on the Arab Spring

Book review by Kevin Crane, published by Counterfire, Sept 8, 2016. Reviewing: The Reawakening of the Arab World: Challenge and Change in the Aftermath of the Arab Spring, by Samir Amin, Monthly Review Press, 2016, 240pp.

The socialist organization Counterfire in Britain has published a sharply critical review of a new book by Samir Amin. The review text is below. Samir Amin is an Egyptian-born scholar who resides in Senegal and is closely associated with the Marxist magazine Monthly Review. The book analyzes the popular protests which broke out in several Arab countries in 2011, including the mass movement in Egypt which overthrew the tyrannical regime of Hosni Mubarak in January-February of that year.

In July 2013, Samir Amin supported the military coup d’etat which overthrew Mohammed Morsi, the post-Mubarak, elected president of Egypt, and Morsi’s Freedom and Justice Party (Muslim Brotherhood)-led government. Earlier in 2013, Amin supported the French military intervention into Mali aimed at curbing the self-determination struggles of Tuareg and other national minorities in the sparsely-populated north of that country.

Samir Amin was not alone in his mistaken stands on Mali and Egypt. The Egyptian and northern Mali people received little sympathy and support from left organizations in the wealthy capitalist countries of the world. In the case of France, a tradition of betraying or turning a blind eye to struggles against French imperialism has become commonplace.

The mainstream, moderate left in France opposed the Algerian struggle for independence during the 1960s. Samir Amin was a member of the French Communist Party at that time and left the party, in part, over its betrayal of the Algerian struggle. Forty years later, the governing Socialist Party in France and the French Communist Party supported the paramilitary coup in Haiti against the elected President Jean-Bertrand Aristide. The Trotskyist groups in France shrugged their shoulders over the Haiti coup, a sad evolution considering the heroic role played by many Trotskyists 40 and 50 years earlier in solidarizing with the revolutionary struggles in Algeria and Vietnam, respectively, for independence from French imperialism.

Today, Samir Amin’s Monthly Review colleagues maintain a studied silence on the February 2014 coup in Ukraine and the ongoing military buildup, sanctions and nuclear posturing by NATO against Russia. That goes also for many left organizations in the world, including almost all of those identifying themselves with Marxism of Trotskyist heritage.

No way to remember anything 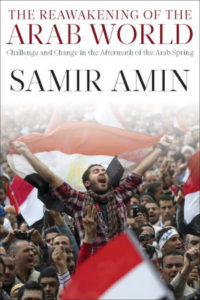 It seems odd to recall that the Arab Spring was half a decade ago, not so much in that it seems so recent, but that it has come to feel so long ago. Given how momentous the events were at the time, it is also strange to consider how limited their political legacy has been. The international wave of revolutions was followed so soon by a series of counter-revolutions and humanitarian crises that serious analysis of them was genuinely difficult to do (but see this). That, and the fact that Arabic is not widely understood outside the region, has meant that interesting political writing on the Arab Spring is relatively rare. So, this new edition of a book by Samir Amin would seem to be a pretty welcome release at a good time to revisit some of the most extraordinary popular struggles of our times. Unfortunately, it is not a good book, in fact it is one that reproduces some of the most unhelpful ideas surrounding Middle-Eastern politics imaginable.

The problems begin pretty much right at the start of the book. Focusing primarily on Egypt, the author begins a re-telling of the story of the Egyptian Revolution in which the struggle of the people is counter-posed to a reactionary bloc, which we are told comprises the military and security forces, ‘comprador capitalists’ in hoc to the IMF and the World Bank, the authoritarian National Democratic Party, and the Muslim Brotherhood (p.29). Part way through reading this the first time, I stopped and started the paragraph again, such was my belief that I must not have read it right, but my re-reading confirmed that this was not the case.

Samir Amin argues that the Muslim Brotherhood, along with all political Islam, is a component of the counter-revolution in all countries in the region, with its social base amongst the unproductive comprador-capitalist class and a mass membership drawn from what we are assured is the ‘criminal element’ (p.31), that is deliberately fostered by the dictatorships and US imperialism to act against progressive movements. A great deal of this book’s discussion of contemporary politics is given over to a very detailed discussion of this conception of political Islam. It is far more concerned with that concept, in fact, than it is with engaging with the nature of either of the Egyptian dictatorships before 2011 or after 2013. If you were to give Reawakening of the Arab World to a person who did not know anything about Egypt, they would be forgiven for thinking that the popular uprising of 2011 had been directed against the Muslim Brotherhood, not the secular dictator Hosni Mubarak!

If Amin’s write-up on the events of 2011 leave a lot to be desired, at least they are not, effectively, ignored like those of 2013. The singular passage on this period is actually worth quoting, if only so that I am not accused of misrepresenting its intent. It is as follows:

… For neither Mubarak nor Morsi were ousted by the army. They were defeated by popular anger, by the events that brought together 15 million citizens against Mubarak, and by 30 million against Morsi’ (p.69).

Lest we forget, which would be easy enough to do if you were taking your political cues from this sort of thing, the overthrow of elected President Morsi by the army was accompanied by a massive military crackdown that Human Rights Watch estimated might have seen as many as one thousand civilians killed, many thousands of civilians injured and tens of thousands of people imprisoned on political grounds. Amin makes literally no reference to these massive abuses by the post-coup government, and indeed the only other mention of anything to do with the coup is some throwaway praise for anti-Morsi protesters marching for ‘secularism’ (p.53). Perhaps Amin believes that the victims, being all corrupt compradors and criminal elements, deserved what they got, but I honestly believe that this silence is the result of a political bind that Amin found himself while writing this: his rigid understanding of the Muslim Brotherhood as a monolithic and reactionary entity was very difficult to square with the way that the Egyptian state deployed the most brutal repression possible against it. If the Brotherhood really was simply a counter-revolutionary party integrated into a reactionary bloc as Amin describes, why on earth would this have happened?

The book does move on from its inadequate handling of revolution and restoration in Egypt to start looking at a bit of historical background for the region as a whole. Curiously, given that the subtitle is Challenge and Change in the Aftermath of the Arab Spring, this is taken all the way back to ancient times and, through three entire chapters, thrashes out an oddly developed theory about the Arab world having been a historic loser from the transition from ‘tributary’ to capitalist modes of production. The concept of the tributary mode of production, controversial among Marxists, would make very long detour difficult enough, but as Amin draws his picture of the region failing to modernise, he manages to shoehorn in some really unpleasant concepts. The theme of Islam being part of the problem returns in variety of strange ways, none weirder than the author’s linking of Bedouin tribes arriving in Syria and the desertification of the country. OK, I am not a climate scientist, but I find the implied link positively risible and struggle to understand why it was even mentioned.

Some final chapters contain another sudden jarring change of theme, as Amin introduces his concept of ‘Mameluke states’ – in which the military are particularly dominant – which I found to be a bit of an unnecessary idea, and an odd one given the lack of interest in the military dictatorships earlier on in the book. By this point, most of the book’s content has been a meander across thousands of years and most of the world, surprisingly little of which has much directly to do with anything that happened in 2011.

Finally, the whole thing gives way to a conclusion that does not so much resolve the political problems of the book as give an explanation of some of its strange features and odd structure. The majority of the book had been written in 2010 (p.229). Despite the title suggesting that this is a book about the Arab Spring, only the first chapter was actually written recently. Timing, it seems, has been everything. Samir Amin got caught out by the occurrence of revolutions he claimed to have been anticipating. It seems that where his ideas have not matched reality, he attempted to bodge them, rather than revise them in any real way. This results in a residue of highly questionable elements about things such as compradors, tributary production and Mameluke states. Nothing, however, is more mistaken than his approach to political Islam in general, and the Muslim Brotherhood in particular.

Many people on the left in Egypt and beyond probably did and do broadly agree with Amin’s descriptions of the Brotherhood. This was a position that saw the Brotherhood as the primary enemy of the revolution, which paved the way for alliances with almost anyone else, ultimately including the military. It was this position that led many left and labour movement figures deplorably to join the campaign that ultimately enabled the military to carry out the 2013 coup and end the revolution in the process. This was a disastrous move from which the left and the labour movement in Egypt has not recovered. This book not only fails to learn any lesson from that bitter experience, it actively promotes and reinforces lessons that could scarcely be more wrong.