No to the war in eastern Ukraine! Declaration of Yalta, Crimea antiwar conference

Declaration of the assembly of citizens of Ukraine and representatives of international solidarity networks, issued in Yalta, Crimea, July 7, 2014. 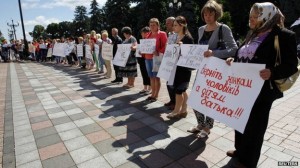 A major human rights and humanitarian catastrophe is unfolding in Ukraine. The government that took power in Kyiv in February 2014 is conducting a brutal military assault in the southeast of the country.

The European Union Association Agreement signed by the government on June 30 and its austerity program promise to sharply reduce living standards and effectively demolish industry, largely located in the southeast. The government includes ministers from far right parties and one measure of its early extremism was a measure, soon withdrawn, to make Ukrainian the only official language, violating the language rights of millions of speakers of Russian, Hungarian and other languages.

This right wing government was immediately recognized and given extensive financial, diplomatic and military support by the US, UK and EU governments. They aim to open Ukraine up to investment for international finance and capital. The US also aims to further its long-standing project of countering Russia’s power in the Eurasian region by its drawing neighbouring countries into the orbit of NATO. This can only further destabilize the region. 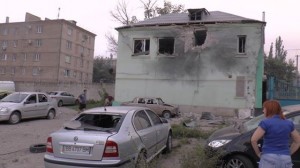 Protesters against the Kiev government have been arrested, imprisoned, attacked and driven into exile. One of the worst cases of violence was the killing and murders of at least 48 antifascist protesters in Odessa on May 2.

People in southeast of Ukraine have sought to protect themselves in the face of the violence of the Kiev government’s agenda. Their peaceful demonstrations against austerity and demands for autonomy were violently met by armed gangs, fascist paramilitaries, and the new National Guard, many of whose members are drawn from the parties of the far right. In a referendum in May, the people of the regions of Donetsk and Lugansk voted overwhelmingly for self-rule and declared autonomous people’s republics.

As the Kiev government seeks to regain these areas, it is engaged in killing its citizens and denying them access to food, water and medicines.

WE, representatives of the people from south east and central Ukraine and delegates from networks of international solidarity with the resistance to war in Ukraine, make this appeal for urgent worldwide action: We call

1. For an immediate end to the war by the Kiev government;

2. For direct talks between Kiev and the representatives of Donetsk and Lugansk republics;

3. For an immediate end to the Kiev government’s human rights violations;

4. For an international solidarity movement addressing the immediate and long term needs of the people currently under attack, raising funds for humanitarian relief and support for their political struggle through non-violent means and exposing what is really happening in the region;

5. For an international inquiry headed by jurists and human rights advocates into the human rights violations and war crimes that have been committed in the course of this war;

6. For an end to present and planned austerity policies;

7. For an end to NATO, EU, US military support for the Kiev government;

8. For immediate cancellation of the NATO maneuvers in Ukraine and in central and Eastern Europe designed to give further material and moral support to the Kiev government and its civil war; and

9. For an international protest against the NATO summit in Wales in September.

Participants at the conference from Ukraine also issued a political manifesto on the future of Ukraine. The Russian original is here. You can read the translation into English here.