Pity the proponents of the Alberta tar sands. Two pipeline proposals to the BC coast are mired in controversy and opposition, and now an oil spill has fouled Vancouver’s harbour and beaches. (Cover photo is a cargo ship in Vancouver outer harbour, by Sally T. Buck from ‘Your BC’, the photo pool of The Tyee.)

A bad turn of events for the local environment and for some of the oil barons targeting their entire planet in their climate-wrecking plans. That’s an apt summary of the oil spill that has fouled the beaches and harbour of Vancouver BC beginning on April 8. 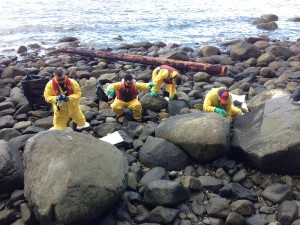 An ocean-going grain ship, the MV Marathassa, that was moored in Vancouver’s outer harbour (English Bay) began to spill toxic fuel—bunker oil—at 5 pm on that date. The ship was queued to move through the very narrow passage into Vancouver’s inner harbour for loading. A passing recreation sailor noticed the spill and contacted Vancouver’s harbour authority. Coast Guard and other emergency responders took several hours to arrive and try to find the source of the spill. By then, darkness had arrived.

Seven, or nine, hours after the spill began (depending on which Canadian Coast Guard report you believe), emergency crews began to deploy booms around the ship to contain further spilling.

The next day, hired-gun emergency services began to deploy specialized vessels to skim whatever the oil they could remove from the surface of the bay. But skimming could only do so much because much of the oil substance sinks below the surface of water. Soon it fouled Vancouver’s beaches and filled the nearby air with toxic fumes. It went to work poisoning and killing some of the rich marine and bird life that lives in or migrates through the harbour waters.

No one knows for sure how much was spilled. Official announcements say 1,500 liters, 2,500 liters, 3,000 liters. The scale of the spread is not yet fully known. Rains and stormy weather arrived 48 hours after the spill. This added to the inexorable spread of the oil that the tidal motions bring.

The crew on board the ship was reportedly tight lipped when officials boarded because the ship owners will be held accountable for the cost of the clean-up. Officials boarded the vessel five hours after the spill was reported. The Panamax vessel was built in Japan and on its maiden voyage. 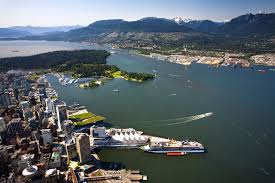 Inner (foreground) and outer harbours of Vancouver BC

For more than 24 hours, officials would not explain where the spill had come from or even what, exactly, it consisted of.

By the next day, daylight and the booms surrounding the fateful ship made it obvious where the spill had come from. A marine biologist displayed a jar of the thick, gooey substance washing up on beaches to CBC television news audiences on the evening of April 9.

Countless photos on social media taken by people viewing the beaches meant the story could not be hidden. It was certainly downplayed by the Coast Guard. Within 48 hours, it was reporting that “80 per cent” of the oil had been cleaned up. The cleanup was “very impressive” chirped federal Ministry of Industry James Moore. The cheery tone crept into much news reporting.

Officials had announced that people should not go to the beaches because of the danger of toxic fumes and contamination by contact, but people with their cameras would not be deterred. CBC national news reported on April 10 that thousands of Vancouver residents are volunteering to clean up but are being told “go away” because the administration to coordinate volunteers, or maybe the will to involve them, does not exist.

Leaks from the boom are being reported, including an 80-foot slick which came ashore in West Vancouver on April 10.

The day after the spill began, it was reported that Coast Guard officials had waited 12 hours before alerting Vancouver region municipal officials that something was amiss. Until then, people continued to walk along the beaches, allowing their pets to swim in the water, and they continued to paddle or sail their recreation vessels through the expanding spill. The offices of Environment Canada and Transport Canada, the federal agencies supposedly responsible for such a disaster, were apparently nowhere to be seen.

Within site of the ship is a former coast guard station at Jericho Beach, closed in 2013 by the federal government amidst much local protest. One year before that, six regional offices of the Environmental Emergencies Program of Environment Canada were closed across Canada, including in Vancouver, leaving only an office in Montreal and in Gatineau, Quebec. Sixty jobs were cut.

The program’s staff was responsible for coordinating the cleanup of spills that occur within federal jurisdictions including waterways, First Nations and federal buildings. They also provide technical advice when incidents occur. They reportedly respond to more than 1,000 significant spills every year. The two remaining offices and their ‘1-800’ phone number now replace the services that the six closed offices formerly provided.

Last year, a Russia container ship carrying 400 tonnes of bunker fuel lost power in the rough seas off the northwest coast of British Columbia. It drifted within nine kilometers of the coast of Haida Gwai (Queen Charlotte Islands) and was rescued by a tugboat from Alaska.

What it means for industry

How bad is the spill? It’s not an Exxon Valdez. Its small volume will limit the range of its spread. But it’s already too late for Vancouver’s beaches (a mix of rock, pebble or sand, depending on location) as maybe its inner harbour. 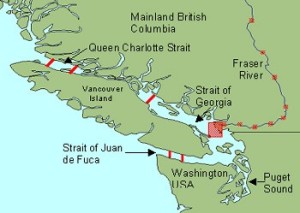 Maybe a large bullet was dodged this time. The famed Georgia Straight and its maze of beautiful islands are just a little further afield. The eastern shoreline of Vancouver Island is a mere 20 km across the Straight. Very close to the south are U.S. waters, also dotted with islands and teeming with marine life. The ports of Vancouver and Seattle share the same access to the Pacific Ocean via the Strait of Juan de Fuca.

What are the ramifications of all this for the captains of industry? Considerable. Vancouver is Canada’s largest port, moving large quantities of grains and grain oils, sulphur (a by-product of western Canada’s oil extraction industry), chemicals, lumber and paper products and large quantities of containers of manufactured goods.

For the past ten years or so (since the election of the Conservatives in Ottawa in 2006), the port has undergone a vast expansion under the umbrella of a federal government-funded plan called the Asia-Pacific Gateway and Corridor Initiaitive. The expansion has meant not only more dock and shipping facilities and more goods moving in and out but also more railroads and highways and bridges so that all the excess and wasteful products that are moved 365 days a year can be bought and sold more quickly.

Then there are the fossil fuels, specifically their expanding trade.

Coal. Vancouver is the largest coal-exporting port in North America. It is a major export shipping point for coal mined in Wyoming. Towns and cities along the Oregon and Washington state coasts have been successful in resisting coal industry expansion plans. The Port of Vancouver (a federal government agency), on the other hand, has been a doormat for King Coal. While the planet burns from growing greenhouse gas emission, the Port of Vancouver has thrown open its arms to coal exports. Currently, the Port is backing an absurd proposal to build a fourth coal exporting facility (Fraser Surrey Docks) in the region. It would be located on the main channel of the Fraser River delta. The river is the largest salmon spawning river in the world and the Fraser River delta is a major bird migration and breeding ground.

Oil. Right now, about two to three oil tankers per month load up with Alberta oil arriving by pipeline to the inner harbour of Vancouver and set sail for U.S. or Asian markets. Relatively small quantities of oil arrive by rail. But the Kinder Morgan company has an application presently before the National Energy Board to build an expanded pipeline, ‘Trans Mountain’, along its existing route to carry toxic Alberta tar sands product. It will increase oil tanker traffic sevenfold. The blow to those ambitions is the really large part of the story of this latest oil spill.

Kinder Morgan’s application has received a rocky reception, notwithstanding the support the project enjoys from federal and provincial governments. Late last year, the proposal made national headlines when the Battle of Burnaby Mountain erupted. Local residents and other environmental activists fought the company to a standstill over drilling it was conducting as part of its application that would see a tunnel constructed under Burnaby mountain to carry the final stage of the line. 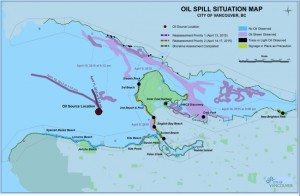 The premier of the province is taking to the airwaves to report with a straight face that the spill proves the foresightedness of her determination to create “world class emergency response” capacity in the province for oil pipeline and shipping spills. She knows that the oil industry expansion to which she is devoting her services will inevitably bring more disasters and the Keystone Cops-style emergency response to this spill has harmed those plans. “Somebody needs to do a better job of protecting the coast, and the Coast Guard has not done it,” she said on April 10.

CBC Radio went to the shoreline of English Bay the day after the spill to gauge the reaction of residents and onlookers. The people to whom CBC spoke voiced dismay and anger at the fouling of the iconic recreation space and wildlife habitat. One resident put her finger on the one, big outcome that will have oil barons and government lapdog agencies losing sleep. She said, “In a way, I’m glad to see this happen because it will wake people up to something far worse that could happen if the Kinder Morgan pipeline is ever built.”

In plain sight: How the Marathassa oil spill took hours to find, by Justine Hunter, Globe and Mail, April 18, 2015
[How the Keystone Cops of Canada’s gutted Coast Guard responded to Vancouver’s oil spill disaster on April 9, 2015.]

Vancouver’s preview of a spill from hell, by Mitchell Anderson, TheTyee.ca, April 10, 2015