British Columbia Premier John Horgan announced on December 11 that his New Democratic Party government will proceed with construction of the $11 billion-and-counting ‘Site C’ hydroelectric dam on the Peace River in the province’s northeast. 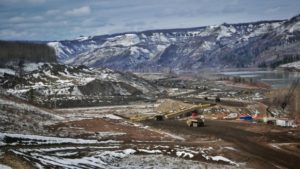 The decision was warmly welcomed by BC’s business class and by the province’s conservative, anti-environment construction unions. But it has drawn widespread condemnation from social rights activists and environmentalists across the progressive spectrum, particularly from First Nations people.

Rushed dam construction began in 2014. The Liberal Party government of the day bypassed requirements for regulatory approval, aiming to get the project to a “point of no return” by the time of the May 2017 election. The Liberals lost the election, raising hopes that the NDP and its governing Green Party partner would cancel the project. 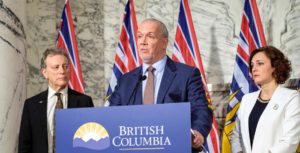 The NDP campaigned in the election for a full regulatory review of the dam, but many of its candidates, including Michelle Mungall, now serving as energy minister, told supporters the party would cancel the project. Formally, the party leaders committed only to a review of the original decision to build Site C.

Reacting to the government decision to proceed, Bob Botterell, counsel for the Peace Valley Landowners Association said the NDP’s Site C review process turned out to be “a sham”. He said association members will continue their fight.

“My clients will never surrender the Peace Valley over such a flawed process,” he said. “My clients will continue to use every tool within Canadian law to prevent Site C from proceeding.”

Grand Chief Stewart Phillip of the Union of BC Indian Chiefs also vows that the fight against the dam will continue. “A nod of approval doesn’t guarantee that this project will, in fact, happen,” he said. “Certainly, there are thousands of people that are bitterly disappointed.”

Philip told the Globe and Mail’s Justine Hunter that he spoke by phone with Premier Horgan on the day of the Site C announcement. “I hung up on him,” Phillip said, adding that Horgan has “pretty much poisoned the well” for reconciliation between the province and Indigenous communities.

Andrew Nikiforuk has written in The Tyee, “The astoundingly stupid approval of Site C, an over-budget mega-project with no demonstrable need and plenty of cheaper alternatives, marks a black day for B.C.’s NDP government.” He is the author of several books on the Alberta tar sands and natural gas fracking industries. He also authored Empire of the Beetle in 2011, cataloguing the destruction of North America’s pine forests due to global warming.

Renowned biologist David Suzuki wrote last month: “The Site C dam should never have been approved [by the preceding Liberal Party government]. Continuing construction is bad public policy, and it’s not too late to halt it.”

The Site C decision is a flagrant violation of the NDP’s promises to seek reconciliation with First Nations people. Talk of ‘reconciliation’ is very much in vogue these days in official circles in Canada, with the federal Liberal government leading the way. ‘We’re sorry for past injustices and we promise to do better’ is a common theme song of Liberal and NDP leaders alike. But the songs are badly off-key.

Of particular note are the growing numbers of First Nations rights advocates who are losing faith in the federal government’s signal Missing and Murdered Indigenous Women and Girls Inquiry established by Ottawa last year. There are growing calls for the resignations of the Inquiry’s directors and a complete re-set of the inquiry’s terms of reference. [Update: Another blow to Trudeau government’s signature political initiative, the inquiry into missing and murdered Indigenous women and girls, CBC News, Jan 11, 2018.]

‘Site C’ dam will flood some 6,500 hectares of valuable farm land (BC Hydro estimate). It will add to the ongoing degradation of the ecology of northern British Columbia and Alberta caused by natural resource plunder—mines, oil and gas drilling and fracking, forest clearcutting–along with the pipelines, roads, railways and electrical transmission routes that service the whole mess. Far from being a ‘clean’ energy source as its proponents claim, the dam will power ever more such capitalist expansion and natural resource plundering.

The dam’s proponents cannot explain at this time where much of the electricity to be generated will be used, but among the options is to power longstanding plans for a natural gas liquefaction (LNG) industry in BC. Such plans have been frustrated to date by world market conditions keeping the price of gas low. The Liberals have touted an LNG mirage for years, claiming it will provide many ‘jobs’ and will improve provincial government revenues. The NDP has gone along with this charade.

Should an LNG industry remain a pipe dream, a fallback position for Site C touted by its proponents is to sell the power to tar sands operations in Alberta.

Giant hydro-electric dams are not ‘green’

Overshadowing construction of Site C are the massive cost overruns of a similar project on the Atlantic Ocean coast of Canada–the ‘Muscrat Falls’ hydroelectric dam now completing construction on the Lower Churchill River in the province of Newfoundland and Labrador. The Lower Churchill Project (Wikipedia) has come in at $13 billion–more than twice its original cost estimate!–condemning the people of the province to steep rises in the price of electricity.

That project, too, violates First Nations rights. For that side of this story, listen to a 25-minute interview which was aired on CBC Radio One‘s weekday newsmagazine ‘The Current’ on Nov 21, 2017. Meanwhile, on the sheer economics of large dams, Andrew Nikiforuk explains in The Tyee: “Researchers from Oxford University describe mega-dams as ‘big bets gone awry’. The economic evidence shows that engineers “severely and systematically” underestimate the actual costs and schedules of large hydro-power dams.”

The economic folly of Canada’s three largest hydro-electric projects under construction was examined in a report last month in The Tyee: A tale of three mega-dams, and why Site C in British Columbia could face the axe.

From global warming denial to ‘delay and deflect’

Lies and obfuscation abound in Canada as the country’s economic elite has shifted from denial of the deadly consequences of global warming to a regime of ‘delay and deflect’. We are told, for example, that expanded tar sands production and pipelines emanating from Alberta are the path to a ‘green’ future in Canada because this will finance a transition off fossil fuels.

Ottawa is going so far as to present natural gas as something other than a fossil fuel, calling it, instead, a “clean energy solution”. A December 4 position paper issued by the federal government argues for “the transition from fossil energy to cleaner fuels, such as nuclear, renewables and natural gas.” (Report in the National Observer.)

Environment and Sustainable Development Commissioner Julie Gelfand reported in October that Environment Canada has not provided partners and agencies with the tools, resources or “leadership” required to assess or adapt to climate change risks. The department has also failed to “clearly indicate” how it will measure, monitor and report on provincial and territorial contributions to meeting a new 2030 emissions target announced by the Trudeau government in May 2015.

“The government does not have a solid strategy for eliminating inefficient fossil fuel subsidies, and it is nowhere near being ready to adapt to the impacts of climate change,” said Gelfand. “The federal government needs to start doing the hard work to turn this latest broad framework into tangible and measurable actions.”

Another of the latest examples of lies and obfuscation by the federal government is the announcement by Environment Minister Catherine McKenna two months ago that Canada will join with Britain in campaigning internationally for an end to coal-generated electricity production. But as it turns out, Canada’s leading financial institutions as well as the directors of federal government’s national pension plan are moving in exactly the opposite direction. Canadian Press has revealed that the country’s business elite is heavily invested in expanding the very global, coal-burning industry that the environment minister claims she and her British counterpart are campaigning to end.

Investment in coal also happens to place Canada’s capitalists at odds with the words (if not policy) of the World Bank. It has announced it will end financial assistance for oil and gas exploration after 2019 (though the bank secretly continued its funding of coal-generated power following a 2013 announcement it was ending it).

Canada is supposedly committed to reduced greenhouse gas emissions as a consequence of signing the global agreement in Paris in December 2015 to limit average global temperature rises to two degrees. But two degrees is already catastrophic, while Canada’s government and capitalist class are firmly wedded to the capitalist system’s expansion mantra that will take temperature rises even further into uncharted territory.

The endless cycle of production and consumption is condemning the Paris agreement to irrelevance. Even the president of France can’t avoid acknowledging that truth, saying the world is “losing the battle” against global warming.

An entirely new political approach is needed that sets sights on combatting the capitalist expansion imperative threatening the world. Canada’s left-wing and environmental movements have been reluctant to embark on such a course, instead hoping in vain for a miracle to emerge from the NDP and Green Party. The Site C decision by the BC government is a time to draw lessons from failed hopes and embark on a new political course.

*  ‘Site C was conceived to power continued industrial development in northern BC’, comment by Roger Annis posted to this article appearing on Rabble.ca: No insight from B.C. NDP as they approve Site C Dam, by Salman Zafar, Dec 20, 2017

Nice article but it misses the main point–Site C was conceived to power continued industrial development in northern BC, including the madcap LNG scheming. Yes, the revenue projections by dam proponents are wonky, but that’s because the projected markets for the electricity are wonky. Will LNG remain a pipe dream? Will American industry or cities need or want the power? Will Alberta want the power? Dam supporters know the risks they are taking and they do not care, neither for public finances nor for the future of the Earth and the species who live on it.

The “$4 billion” cost figure for Site C is wrong. Two billion dollars have been spent to date; another two billion is the estimated cost of closing and remediating the site. That estimate is inflated by ‘too big to close’ dam proponents.

The article should have mentioned the construction unions. They support this and other anti-environment projects because they bring dues dollars into their coffers.

Christy Clark said if Site C’s unreliable electricity sales projections do not work out, the electricity can be peddled to ‘greenwash’ Alberta’s tar sands. So much for hydroelectricity as a ‘green’ or ‘renewable’ energy source. It is continued industrial and consumerist expansion requiring more and more natural resource plundering that is killing the Earth. In the end, it doesn’t matter whether this is powered by fossil fuels or by renewables. What the planet and the humans inhabiting it require is a powering down of all the waste and excess of capitalist/consumerist society, as fast as can possibly be done. Anything less takes human society to a very dangerous place, already made extremely dangerous by rising militarism and war.