My nine hours with the Ukraine National Guard

By Graham Phillips, British journalist at Russia Today, published on his website, June 7, 2014 (see the original weblink for full photos and video reportage) 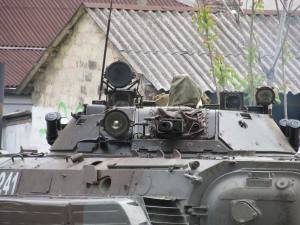 In a lengthy report on his website, journalist Graham Phillips provides a detailed look at the origins, thinking and motivations of the members of the military and militia forces of the governing regime in Kyiv that are prosecuting the regime’s civil war in eastern Ukraine. The written report is filled with photos video reportage, some in English and some in Russian and Ukrainian. What follows is the opening of the report. Go to the weblink above for the full report and videos.

Nothing has become so notorious from this Ukraine conflict as Ukrainian military unit, the National Guard. Created in 1991, disbanded in 2000 then ‘rebooted’ in March 2014 (tasked with “upholding the constitutional order and restoring the activity of state bodies”) under the auspices of ultra-national extremist group Pravy Sektor leader turned Deputy of National Security, Dmitry Yarosh, as Euromaidan’s coup government immediately faced the breakaway of Crimea. Despite strong statements at that time of their intention to intervene, the National Guard took no meaningful action. Crimea held its referendum on March 16th, becoming part of the Russian federation on March 18th.

The fact is Crimea had come simply too soon for a Ukrainian National Guard still hastily forming from Interior Troops, members of the Pravy Sektor and other extremist Ukrainian Euromaidan elements. Yet as the Crimea popular sentiment spilled over, characterised by resistance to a non-elected Kiev government viewed as overtly hostile to the east of Ukraine and Russian connections, the National Guard was ready this time, becoming a core component of the ‘Anti-Terror Operation‘, as announced by then acting president Oleksandr Turchynov on April 13th, the day after the Slavyansk situation began. The start of April saw anti-Kiev actions intensify across the east, notably in Donetsk and Lugansk.

In the near two months since, the National Guard have been directly linked with the perpetration of an increasing number of atrocities in the Donetsk and Lugansk regions. Evidence links them with the mass killing of unarmed civilians, destruction of civilian property and abductions. On May 18, in Kramatorsk, the National Guard detained Russian journalists Marat Saichenko and Oleg Sidyakin. On May 20th, leaving the city of Mariupol, I was then detained, spending 9 hours with them before being transferred to Ukraine’s security service, the SBU…

Go to the weblink above for the full report and videos.