More than 1,000 march in Lac Mégantic to demand rail safety, end to rail transport of oil

More than 1,000 people marched through the streets of Lac Mégantic, Quebec on October 11 against the threatened renewal of oil by rail transport through their town. They took their protest to a public forum of candidates in the October 19 federal election. The forum was devoted to the issue of rail safety.

Protesters came from across Quebec and from the United States. The organizations calling the action included the Coalition des citoyens et organismes engagés pour la sécurité ferroviaire, the province-wide Regroupement vigilance hydrocarbures Québec (RVHQ) and Convoi-citoyen. (A report on the march by RVHQ is here, and a Sept 12 press release is here, both in French.)

Marchers demanded an immediate end to shipments of oil and other dangerous cargos along the Central Maine and Quebec Railway (CMQ) line. A petition to this effect with 2580 signatures was delivered last month to the town council of Lac Mégantic. 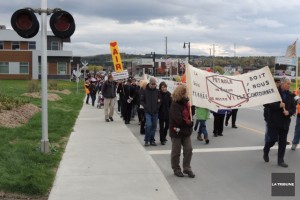 They also want safety upgrades to the rail line, including rerouting it around Lac Mégantic. CMQ is the new owner of the fateful, historic, former CP Rail line that connects Montreal to New Brunswick through southern Quebec and New England. The line runs through the center of Lac Mégantic.

The former owner of the line, Montreal Maine and Atlantic Railway, declared bankruptcy after causing the oil train disaster that killed 47 residents of Lac Mégantic on July 6, 2013. It was owned by the U.S. rail short line conglomerate Rail World. 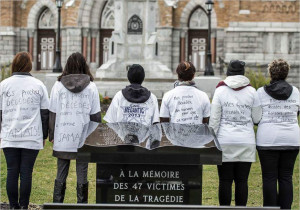 Commemoration at Lac Megantic monument was part of a day of protest of more than 1,000 people on October 11, 2015 (photo Claude Grenier)

Robert Bellefleur of the aforementioned Coalition told the Journal de Montréal, “In June 2014, the municipality of Lac Mégantic signed an agreement with CMQ Railway stipulating that no transport of crude oil would be made on the section of the railway that runs through town until January 2016.

“Now, the month of January is approaching and we fear we will see the return of trains pulling up to 120 wagons of crude oil.”

CBC News reported absurdly that the number of people on the march was in the “dozens”. The news report on CBC`s French-language service, Radio Canada, includes video which clearly shows the estimate of 1,000 people reported by Ronald Martel of the Sherbrooke daily La Tribune to be accurate, and more. The Journal de Montréal reporter that day says the number was 2,000.

Two of the local candidates in the federal election support the call to reroute the CMQ rail line around Lac Mégantic–the NDP and the Green Party. The Liberal and Conservative candidates say “more study” is needed.

Relatives of the victims of the July 6, 2013 disaster received good news recently from a U.S. bankruptcy court. It has approved a $446 million compensation fund. The fund has been created by the 20 or so oil and rail companies that caused the disaster. Irving Oil is one of the fund contributors.

The settlement was held up for months by CP Rail. It transported the fateful train from North Dakota to Farnham, Quebec, just south of Montreal. The train was then passed on to MM&A to complete its journey to the Irving Oil refinery in Saint John, New Brunswick. But CP says it bears no responsibility for what happened after it passed off the train. It has refused to contribute to the settlement fund.

A Chicago law firm headed by Attorney Peter Flowers announced on October 13 that his firm will sue CP Rail for damages on behalf of most of the victims of the disaster. The firm was already acting on their behalf in reaching the compensation agreement.

Payment from the settlement fund will go to the families of the victims, to local businesses that were affected and to the provincial and municipal governments that managed the social and environmental consequences of the disaster, including removing oil from local waterways.

Another march demanding a rerouting of the rail line will take place in Lac Mégantic on October 15. This one will be part of Quebec and worldwide actions by the Marche mondiale des femmes (World March of Women), an annual institution founded in Quebec in the year 2000.

The goal of this year’s marches is described on the project’s website: “Together, women will oppose the capitalist, patriarchal and colonialist forces which are responsible for austerity, environmental destruction and militarism.”

Émilie Théroux tells L’Echo du Frontenac online journal, “Lac Mégantic was chosen for the march in the region of Estrie (east of Montreal) because the tragedy of July 6, 2013 is a concrete example of a capitalist and patriarchal economy.” Théroux is the development officer at the women’s center of the regional municipality of Granit and is the coordinator of the planned march.

The Quebec-wide Marche mondiale des femmes will take place in Trois Rivières, the small city located halfway between Montreal and Quebec City on the shore of the St. Lawrence River. The day’s actions coincides with the trade union-led mass campaign against the austerity policies of the provincial. An estimated 150,000 people marched against austerity in the streets of Montreal on October 2.

Further reading:
*  Extensive news coverage (in French) from the town of Lac Mégantic and surrounding region is provided by Ronald Martel, a journalist at the daily La Tribune in Sherbrooke Quebec. The newspaper is part of the La Presse (Power Corporation) chain of corporate newspapers in Quebec.