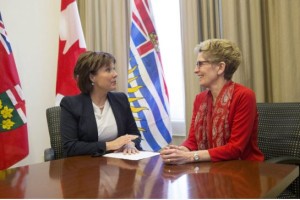 Toronto Star columnist Thomas Walkom says the Ontario Liberal government elected on June 5 of this year is “stickhandling” around its election promise to create a pension plan to supplement the national Canada Pension Plan that the federal Conservatives are refusing to improve. Walkom says Premier Kathleen Wynne is “ragging the puck” on the issue, likely waiting until next year’s federal election in the hope that a different federal government will be elected and will make some kind of gesture to improve the CPP.

Walkom’s column is in response to the vague ‘Bill 56’ introduced by Wynne this week in the Ontario Legislature. The bill proposes an information gathering exercise that does little more than buy time on the public pernsion issue.

Wynne is under intense pressure by big business not to introduce a supplemental pension plan because it considers social programs to be little more than bothersome ‘payroll taxes’.

In my July 3 article on the outcome of the Ontario election (the article was framed as a call for building a new, left wing party in Canada), I wrote:

The lesser-evil appearance of the Liberals is built on illusion. The party’s election platform was anything but progressive. Its key proposal is to create a supplementary pension plan due to federal government refusal to improve the Canada Pension Plan. But it remains a vague promise. Will an Ontario plan be a universal and defined benefit plan like the CPP? Or will it be a version of the defined-contribution investment fund (‘private pooled pension plan’) floated by the federal government some four years ago as a way to dodge pressure for CPP improvements? We do not know.

Wynne’s move comes in the face of the years-long refusal of Stephen Harper’s federal Conservative government to heed popular demands for benefit increases to the CPP. The federal stand was reaffirmed at a December 2013 meeting of federal and provincial finance ministers. Federal Minister of Finance Jim Flaherty sabotaged what the provincial ministers assumed would be some formal discussion of the matter.

Some provincial governments have joined Ontario in giving a nod to the public pressure demanding pension improvements. Others, notably the Alberta and BC governments, share the federal government’s ideological opposition to livable public pensions.

The ball on public pension plan improvements still sits squarely in the court where it sat five years ago—a protest campaign of mobilizations in workplaces and in the streets is needed if we are to see any meaningful improvements to the country’s universal pension plan. The federal government is ideologically opposed to public pensions.

In 2009 and 2010, we began to see stirrings from the base membership of the labour movement of such a movement. That was cut off by leaders of the Canadian Labour Congress and the New Democratic Party when the Harper government made vague commitments to talk about the CPP. It was all a ploy to quell dissent on the issue.

Union and NDP leaders called a halt to protests and entered into fruitless talks with the government. the talks had one result–to deflate the momentum towards a protest movement. By 2012, the government felt confident enough to actually cut CPP benefits.

And so here we stand today. More stickhandling and ragging the puck by a Liberal provincial government whose attitude to public pensions and social program differs little from that of the federal Conservatives. And a corollary to all this is the widespread view in the union movement and among progressives that ‘strategic voting’ alliances between the NDP and the Liberal Party in next year’s federal election might be the way to unblock the seeming irrelevance of the present political setup for the majority of Canadians who want to see social improvements and tackling the challenges of the global warming emergency. A resolution in favour of ‘strategic voting’ was narrowly rejected by last month’s convention of the BC Federation of Labour.

Below is Thomas Walkom’s column in today’s Toronto Star.

Premier Kathleen Wynne’s slow march toward an Ontario pension plan began with a quiet thud this week. Quiet because Bill 56, entitled “An act to require the establishment of the Ontario Retirement Pension Plan,” does little to accomplish its stated aim.

It says the government must pass another law setting up the proposed pension plan by Jan. 1, 2017. It gives the government the power to collect relevant information and provides some broad details of the proposed plan, all of which echo pre-election promises made in the May budget. It very carefully omits other broad details set out in that budget.

It does not, for instance, repeat a budget promise to provide eligible workers with benefits equal to 15 per cent of their earnings — up to a maximum of about $12,800. Indeed, Bill 56 doesn’t say anything at all about benefit levels.

Documents released with the bill say the government will begin “consultations” next year to determine how exactly this scheme would work.

Both Associate Finance Minister Mitzie Hunter, who is stickhandling the issue, and Finance Minister Charles Sousa say they’d prefer not to create an Ontario pension plan. Both say they would prefer that Ottawa and the provinces agree to bolster the existing Canada Pension Plan instead.

Is Wynne simply ragging the puck until the next federal election, in the hope that a new national government committed to CPP expansion will make her entire project unnecessary?

Certainly, her government has accomplished little on this file since the Liberals won re-election in June. Specifics were sketchy then. In July, the government promised more technical details by the end of the year.

But with Dec. 31 just three weeks away, none of these details has yet emerged.

What sorts of workers will be able to participate in the Ontario plan? Bill 56 says all employment is eligible except that which is exempted.

What kind of employment will be exempted? That hasn’t been decided yet.

What would the benefits be? The budget promised benefits equal to 15 per cent of a worker’s wages up to a maximum earnings cap of $90,000 annually.

Bill 56 reiterates the $90,000 cap. But it is silent on what percentage of income a retiree could expect. That is to be determined later.

Will low-wage workers be exempt? Yes. But the exact threshold is yet to be determined. It might echo the CPP wage threshold of $3,500 a year. Or it might not.

Workers already enrolled in a comparable workplace pension plan will not be eligible for this scheme. But what exactly constitutes a “comparable” plan is yet to be determined.

Similarly, other nuts and bolts issues — such as formulas used to index benefits to inflation or provide survivor benefits remain indeterminate. Bill 56 says only that these will be decided by 2017.

The bill does repeat a budget promise to set a maximum contribution rate of 3.8 per cent of earnings, split equally between employer and employee. Note that this is a maximum. Bill 56 leaves open the option that the actual rate could be less.

Business groups have made it clear that’s what they’d like to see happen. Both the Ontario Chamber of Commerce and the Canadian Federation of Independent Business oppose any measure that would increase payroll taxes.

Prime Minister Stephen Harper has also criticized the scheme. As well, I expect many Liberal MPPs are wary of raising payroll taxes a year before the 2018 provincial election. There will be plenty of pressure on Wynne to back down.

Politically, the premier can’t afford to openly deep-six a scheme that was the centrepiece of her successful 2014 election campaign. But she might get away with quietly neutering it.

In short, the Ontario Retirement Pension Plan — as originally advertised — is far from a done deal. Bill 56 may not clarify much. But it makes that clear.