It is common for liberal, anti-nuclear advocates to ascribe equal responsibility to Russia for the U.S. renewal of the nuclear arms race, the latest chapter of which is the unilateral withdrawal by the U.S. from the 1987 Intermediate-Range Nuclear Forces (INF) Treaty. 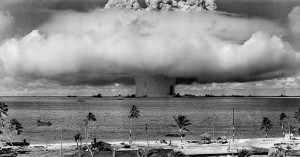 A new set of false accusations against Russia is published on February 8 in the eclectic CounterPunch website. Writer Lawrence Wittner begins his brief commentary in CounterPunch with these words: “At the beginning of February 2019, the two leading nuclear powers took an official step toward resumption of the nuclear arms race.” He drives his ‘Russia-U.S. equivalent’ argument home with these two sentences: “Actually, the scrapping of the treaty should not have come as a surprise. After all, the rulers of nations, especially “the great powers”, are rarely interested in limiting their access to powerful weapons of war, including nuclear weapons.”

But the claim that the U.S. and Russia have taken simultaneous steps to abrogate the INF Treaty (Wikipedia) is false to the core. Here is a partial record of the by-now long U.S. record in weakening if not abrogating past nuclear weapons treaties between the U.S. and Soviet Union as well as potential future ones that, so far–fingers crossed–have averted a catastrophic unleashing of nuclear weapons on the peoples of the world. None of the following facts are mentioned by Lawrence Wittner and CounterPunch:

*  The U.S. announced on February 1, 2019 a unilateral withdrawal from the 1987 Intermediate-Range Nuclear Forces (INF) Treaty, to take effect on August 2, 2019, according to the abrogation terms of the treaty.
*  The following day, the Russian government announced that it would respond to the U.S. provocation by itself withdrawing from the treaty. The government has restated its offer for talks with the U.S. on many nuclear non-proliferation issues.
* The Russian missile system which the U.S. says constitutes a violation of the INF Treaty is the ‘Novator 9M729’. The missile is still under development and Russia has not hidden its development. The 9M729 was publicly displayed by the Russian military for the first time in January 2019 (see: reports in the pro-U.S. think tank Missile Threat and in the anti-Russia New York Times). RT reports that during nuclear talks in Geneva that same month, the Russian government offered to permit increased inspections of the missile’s development. That would reverse a previous decision by the government.
* As far back as 2011, current National Security Advisor John Bolton co-authored an op-ed in the Wall Street Journal calling for the abrogation of the INF Treaty. Back then, it was alleged actions by the Iranian government of the day that were cited as the excuse for abrogation. Today, accusations against China have been added to the U.S. pretext.
* The U.S. abrogation of the INF Treaty is only the latest in a long line of measures the U.S. has taken to undermine or break nuclear weapons agreements in bids to achieve nuclear weapons superiority over post-Soviet Union Russia. These include abrogation in 2002 of the 1972 Anti-Ballistic Missile Treaty between the U.S. and Soviet Union. The ABM Treaty prohibited installation of nationwide, anti-ballistic missile systems. U.S. measures have also included the resumption during the Barack Obama presidency of research and production of new generations of nuclear weapons systems designed to heighten first strike capability, for example, ‘hypersonic’ missiles.
* In 2016, the U.S. installed the ‘MK-41′ nuclear and multi-missile capable missile launcher in Romania. It is in the process of installing the same system in Poland and Japan. The U.S. government got around its INF Treaty obligations by claiming that these new installations are “defensive” systems only. 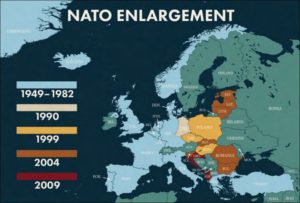 * As is by now now well known, the U.S. and its allies have for the past nearly 30 years steadily expanded country membership eastwards in the warmongering NATO military alliance to include countries near-to and even bordering Russia.
* On July 17, 2017, the U.S. and its NATO allies abstained on the historic vote at the United Nations General Assembly in favour of an international treaty to ban the production and possession of nuclear weapons. (See below an appended news compilation on this story.)

Many other anti-nuclear advocates have voiced similar ‘equivalence’ arguments against Russia over the INF Treaty. The International Campaign to Abolish Nuclear Weapons, for example, issued a statement on February 1, 2019 which states, “With Russia and the U.S. putting the entire world at risk, it is urgent for all responsible states to stand up and join the Nuclear Ban Treaty.” It writes further, “If Russia and the U.S. are honest about their commitment to nuclear disarmament, both parties should do everything they can to save the Treaty in the coming six-month period. But over the past few weeks, months, and even years, both Russia and the U.S. have signaled an apparent interest in a new nuclear arms race.”

Is someone at ICAN having doubts about the organization’s ‘equivalency’ argument? The title of the aforementioned ICAN statement as published on its website reads, ‘U.S. withdrawal from INF Treaty puts Europe (and the world) at risk’.

In this age of calamitous global warming, the campaign by ICAN for the abolition of nuclear weapons assumes all the more importance. But this campaign is hampered by writings and statements that fail to identify who, exactly, is responsible for the continued existence of nuclear weapons and the escalation of a new nuclear arms race that is upon us. The United States is the only country to have ever unleashed nuclear weapons. Today, it threatens their use anew, against Korea. It is the governments in the United States, the other NATO countries, Australia/New Zealand and Japan–representing the ruling capitalist elites of those countries–who bar the path to peace and a nuclear weapons-free world.

How the U.S. violated the INF Treaty with its ‘Aegis’ missile system installed in eastern Europe, by Theodore A. Postol, published by the Bulletin of the Atomic Scientists, February 7, 2019  [The editors of the Bulletin of the Atomic Scientists have misrepresented the actual views written by Theodore Postol in his article in the Bulletin. Their chosen headline for the article is: ‘Russia may have violated the INF Treaty. Here’s how the United States appears to have done the same‘. Below are excerpts from the article. These give an accurate overview of the views of Theodore Postal.]

…The issues associated with preserving the INF Treaty are complex, and both the U.S. and Russian sides have legitimate concerns that need to be resolved if the treaty—an important element of the world arms control regime—is to be resurrected in some form in the six months between the treaty suspensions announced last week and final withdrawal from the treaty.

As they recount allegations about Russian violation of the INF, many major mainstream media outlets have routinely misreported basic facts on the land-based Aegis systems in Eastern Europe and related issues. The actual facts of the matter support the Russian position. This reality must be taken into account, if the United States and Russia (and possibly other countries) are to come to agreement on continued control of intermediate-range missiles.

The actual facts of the matter support the Russian position. This reality must be taken into account, if the United States and Russia (and possibly other countries) are to come to agreement on continued control of intermediate-range missiles.

[And here are the concluding two paragraphs of Theodore Postol’s article: ]

The political situation between the United States and Russia is dangerous—perhaps more dangerous than it has ever been—and there are certainly reasons for the West to be concerned about Russian behavior, including its possible violation of the INF Treaty. But the United States has a long, bipartisan history of making senseless political decisions to deploy ineffective missile defenses, and then justifying those decisions with disinformation, even when technical and military analysts can readily unmask it.

The routine U.S. reliance on misleading claims about missile defense systems—claims too often parroted by the Western press—contributes to an environment in which foreign powers, both friend and foe, rightly do not trust the word of U.S. political and military leaders. This avoidance of factual reality has contributed to the impending demise of the INF. Saving the INF or replacing it with another agreement that limits the extremely destabilizing spread of intermediate-range missiles will require that both the United States and Russia come clean about their efforts to develop and base such missiles. Refusing to acknowledge reality is a poor strategy for enhancing U.S. or Russian security and pursuing the sort of arms control that makes nuclear war less likely.

Introduction by A Socialist In Canada:

There appears to be a paucity in English-language alternative media in reporting and analyzing the historic vote at the United Nations General Assembly on July 7, 2017 in support of an international treaty to ban the production and possession of nuclear weapons. Enclosed below are two articles from Common Dreams reporting on the vote.

There are four important matters absent from the analysis in Common Dreams and in other reports published to date: 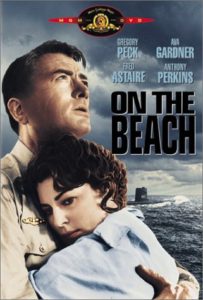 *  Once it successfully tested its first nuclear weapon in 1949, the Soviet Union strove for agreement with the United States to abolish the weapon. The United States refused.

*  What followed were a series of international treaties to limit the production, proliferation and use of the weapons. See listed in the appendix here below the three most important of those treaties.

*  During the Obama presidency, the United States began a program of ‘modernization’ of nuclear weapons at projected cost of more than a trillion dollars. This continues under President Trump. France and Britain have also announced their own ‘modernizations’.

Taking all the above together, it is inaccurate and simplistic to portray present-day Russia as equally culpable as the United States for the nuclear weapons danger in the world. Furthermore, the military and political interventions by the NATO military alliance in recent years in eastern European countries directed against Russia only add to the evidence that it is the United States, not Russia, that is escalating the nuclear war danger in the world.

(Go to this weblink on A Socialist In Canada for the full text of the news compilation.)