Kirill Kalinin is the young press secretary at the Russian embassy in Ottawa. In early 2017, he joined others in Canada, including journalists in mainstream media, in reporting and voicing concern that the maternal grandfather of Foreign Affairs Minister Chrystia Freeland had been a WW2 Nazi collaborator in Ukraine and Poland.

The story might have come and gone quickly except for the fact that Freeland’s initial response to the story was to deny that her grandfather, Michael Chomiak, had been a collaborator. She argued that the story was all a Russian ploy to undermine Canadian democracy and undermine Canada’s support to the extreme-right government in Ukraine. That fell flat as even mainstream journalists and editorialists declined to join her attempt to deny and deflect the uncomfortable news.

Kalinin and others also drew attention at the time to reports that Canada has monuments to World War Two Ukrainian Nazi collaborators in public spaces in several Canadian cities.

Kalinin is one of four Russian diplomats that Canada has expelled as part of the clumsy, failing attempt of the British government and its NATO allies to frame up the Russian government for the alleged poisoning in Salisbury, England on March 4 of two former Russian nationals. No less than Prime Minister Justin Trudeau has now brought the Freeland debacle back into the news because he told journalists in Ottawa on April 4 that the four diplomats were expelled due to alleged interference in Canadian politics. 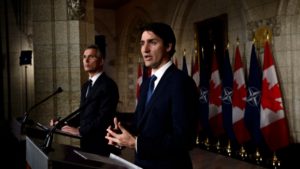 Trudeau met with NATO Secretary General Jan Stoltenberg in Ottawa that day. Speaking to journalists following the meeting, Trudeau once again hyped anti-Russia hysteria. But he overstepped by connecting the Freeland story of one year ago to Canada’s decision on March 26 to expel the four Russian diplomats. He said, “We all can remember the efforts by Russian propagandists to discredit our minister of foreign affairs in various ways through social media and by sharing scurrilous stories about her.”

Trudeau’s remarks have sparked a flurry of attention in mainstream media.

There was nothing at all “scurrilous” about the reporting of the two news stories in 2017. Widespread concerns about Freeland’s denials were aired though mainstream media at the time. Below is a listing of some of the many concerns published in 2017.

Columnist Thomas Walkom at the Toronto Star has published a summary in the newspaper’s edition of April 6 of the political debacle which Trudeau has re-opened. His column is headlined ‘Why did Canada expel four Russian diplomats? Because they told the truth’. He writes:

We now know how the Russians have been subverting Canadian democracy. They have been propagating truthful news.

That information comes courtesy of Prime Minister Justin Trudeau who on Wednesday finally explained the motive behind his government’s decision last week to expel four Russian diplomats and refuse entry to three more.

At the time, Ottawa said it was making the move in support of Britain, which blames Russia for using a deadly nerve agent to poison a double agent living in England. But in a written statement, Foreign Affairs Minister Chrystia Freeland also said the Russians had been using their diplomatic status “to interfere in our democracy.”

How exactly the Russians had been interfering was not explained. Efforts to get more information from Freeland’s office were unsuccessful. In an interview on CBC, Defence Minister Harjit Sajjan said that he had to stay mum for reasons of national security. Nobody else would talk.

Then, on Wednesday [April 4], Trudeau spilled the beans. The Russians are being punished for saying that Freeland’s grandfather was a Nazi collaborator during the Second World War. Trudeau called this an effort “by Russian propagandists” to smear Freeland, which perhaps it was. The only trouble with all of this is that the Russians were telling the truth…

Columnist David Pugliese also summarizes the story, in the National Post daily on April 6. He writes a profile of Kirill Kalinin and provides background on how the Trudeau government sought to deny the Chomiak story in 2017 by ‘changing the tune’ and talking of Russian conspiracies against Canada.

Ironically, all this is being played out in Canada’s mainstream media whose editorial stands are uniformly hostile to all things Russian. Meanwhile, alternative media and the political left are silent because they has given itself over to the prevailing anti-Russia hysteria being orchestrated by the Ottawa government and the country’s mainstream media. The NDP caucus in Parliament voted unanimously in favour of the Trudeau government’s expulsions of the Russian diplomats. Both the expulsions and the NDP and Green Party’s votes in favour has not been reported or commented in alternative media.

The left is hoping and praying that all the dangers associated with NATO’s new cold war with Russia will just go away, leaving middle class Canadians in peace amidst a troubling world. If only the crazed and toxic anti-Russia drive would go away.

Trudeau’s message is that questioning Canada’s continued ties to Ukrainian Nazis and neo-Nazis is something that will get you into trouble with his government.

Anti-Russia hysteria is part and parcel of how the wealthy capitalists in the Western world are trying to prevent their populations from realizing that the capitalist system is sinking deeper and deeper into an economic malaise with grave social and environmental consequences.

Capitalism is threatening the very future of civilization with its rising war and militarism, global warming emergency and rising social inequities. This dark shadow will not go away by ignoring it. It must be opposed with a positive, forward-looking program of social and environmental justice.

Examples of concerns aired in 2017 over Foreign Affairs Minister Chrystia Freeland’s denials of her maternal grandfathers’s dark past:

*  Chrystia Freeland’s family lie grows bigger: Michael Chomiak volunteered for Hitler before German invasion of Ukraine and was hunted by Polish police until the 1980s, by John Helmer, published on his website Dances With Bears, June 18, 2017

*  The reality of neo-Nazis in Ukraine is far from Kremlin propaganda, by Lev Golinkin, opinion contributor, The Hill (Washington DC), Nov 9, 2017