Introduction by A Socialist In Canada: The following article, and others like it warning of the global warming emergency, are a reminder of the folly of the war policies of the big imperialist countries of the world. They are waging wars or making threats in the Middle East, in eastern Europe against Russia, and increasingly against China (including a proposed, vast expansion of the military budget of Australia, one of the world’s largest, per capita climate vandals). As the imperialists ‘fiddle’, ‘Rome’ is burning… 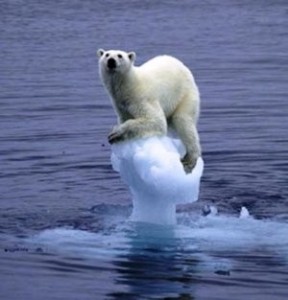 Last summer, James Hansen—the pioneer of modern climate science—pieced together a research-based revelation: a little-known feedback cycle between the oceans and massive ice sheets in Antarctica and Greenland might have already jump-started an exponential surge of sea levels. That would mean huge levels of sea level rise will happen sooner—much sooner than expected. Hansen’s best estimate was 2 to 5 meters (6–15 feet) by the end of the century: five to 10 times faster than mainstream science has heretofore predicted.

The result was so important that Hansen didn’t want to wait. So he called a press conference and distributed a draft of his findings before they could be peer-reviewed—a very nontraditional approach for a study with such far-reaching consequence. Now, after months of intense and uncharacteristically public scrutiny by the scientific community, the findings by Hansen and his 18 co-authors have passed formal peer review and were published Tuesday in the journal Atmospheric Chemistry and Physics.

That’s bad news for those of us rooting for a stable planet. With Hansen’s paper now through peer review, its dire conclusions are difficult to ignore. And the scientific community, many of whom were initially wary of Hansen’s paper when it came out this summer, is starting to take serious note.

Hotter weather appears to be here to stay, El Nino or not, the UN weather agency said Monday, warning that the Paris climate accord last year shouldn’t give way to complacency about global warming. The World Meteorological Organization issued its annual climate report following a record-hot 2015, highlighting records already announced by different countries’ weather agencies. The agency pointed out that not only was 2015 breaking records on the surface but also hundreds of meters deep in the ocean.

And the first two months of 2016 were even hotter, so startling that they “have sent shockwaves around the climate science community”, David Carlson of the World Climate Research Program said in a statement…

In an email to Slate, Ruth Mottram, a climate scientist who was skeptical of the initial draft, calls the final study “considerably improved.” Mottram, who specializes in studying the Greenland ice sheet, said “the scenario they sketch out is implausible, though perhaps not impossible … it’s frankly terrifying.” 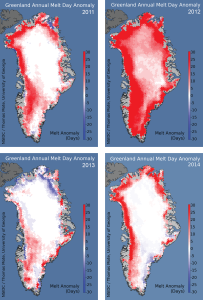 Richard Alley, a key figure in the polar research community, also gave the Hansen study cautious praise. “It usefully reminds us that large and rapid changes are possible,” Alley said in an email, and that “uncertainties are clearly loaded on the “bad” side.” Alley stressed, though, that the Hansen result was only a single study, and wasn’t detailed enough to be used as a firm prediction.

Hansen and his co-authors describe a world that may quickly start to spin out of control if humans keep burning fossil fuels at close to our current rate. “It is not difficult to imagine that conflicts arising from forced migrations and economic collapse might make the planet ungovernable, threatening the fabric of civilization,” the study reads. And given the assumed accelerated pace of melting, all this could happen just decades from now, not centuries.

The world Hansen and his colleagues describe reads like a sci-fi plot synopsis—and it’s now officially part of the scientific canon (though peer review doesn’t necessarily guarantee that a paper is infallible). If Hansen and his colleagues are correct, this paper is likely one of the most important scientific contributions in history—and a stark warning to world governments to speed up the transition to carbon-free energy.

Hansen recorded a State of the Union response-style video address to accompany the paper, and, hoo boy, don’t watch it if you were hoping to have an upbeat day (it is also somewhat technical):

Basically, this is the video that all the world leaders ignored in The Day After Tomorrow [Hollywood disaster film, 2004]. In the video, Hansen predicts “the loss of all coastal cities … and all their history” should sea level rise proceed as quickly as his model indicates is possible. And, as Hansen repeatedly cautions, these changes will only be avoidable with rapid coordinated action—far exceeding current efforts—and could spell catastrophe for low-lying regions such as Bangladesh and the Netherlands.

The biggest scientific contribution that Hansen and his colleagues make is an attempt to nail down a Moore’s law (which models nonlinear rates of growth in computer chips) to ice sheets: Assuming non-linear processes have already begun, how fast will Greenland and Antarctica melt? Through scrutiny of climate models, evidence of ancient sharp shifts in climate, and observations of rapid change over the past few decades, Hansen lays out possible futures that put us past the point of no return.

The paper’s conclusions on sea level rise go far beyond current scientific consensus. Hansen suggests “several meters” of sea level rise over the next 50 to 150 years given a continued high rate of fossil fuel emissions, well above the accepted 1 meter or so by the end of the century. He admits the ice sheet models he uses “are still very primitive.”

Hansen’s co-author Eric Rignot said in an email that the exploration of such extreme scenarios was justified “because they are not unlikely, and they are more likely than the more conservative scenarios branded by [United Nations] reports.”

“Ice sheet loss is non linear by nature,” said Rignot. “You push the ice sheet one way, they do not react; you push them more, they start reacting; you keep pushing and they fall apart. … If we get there, we won’t be able to fix it.”

Kim Cobb, a climate scientist specializing in ancient climate change, agrees that the Hansen study is useful mostly because it explores the worst-case scenario. “My bet is on non-linearities kicking in that we cannot yet measure adequately,” Cobb said in an email. “In that way I think it’s important to explore the upper limits.”

In addition to the risk of “several meters” of sea level rise this century, which Hansen calls the most important finding, the final version of Hansen’s paper gives new emphasis to the possibility that the ocean’s heat circulation system may be in the process of shutting down. The circulation shutdown would precede the rapid increase in global sea levels. If the shutdown happens, simultaneous cooling of the waters near Greenland and Antarctica and warming in the tropics and midlatitudes could spawn frequent strong storms on the order of Hurricane Sandy or worse.

This makes sense—if the oceans are no longer able to transport heat toward the poles as effectively, the atmosphere would need to take over the job—and big storms are the best way of doing that. In his video address, Hansen says “all hell will break loose” should the ocean circulation system shut down entirely. (In the paper, Hansen calls this the “hyper-anthropocene.”)

Though Hansen is surely the most vocal advocate of the possible dangers of near-term climate change, he’s not the only one working on this problem. The study, in addition to being even more terrifying than last summer’s draft, may act to motivate increased urgency for scientific research in Greenland and Antarctica, especially their effects on ocean circulation—as well as increased attention to the possibility of truly dire near-term global change. For years, Hansen has been calling for a steadily increasing carbon tax, and last December, during the Paris climate change negotiations, he and three colleagues wrote an op-ed in the Guardian calling for a quick ramp-up of nuclear energy.

“What we’re threatening to do to the future of young people is … irreversible, irreparable harm,” Hansen said in a call with reporters on Monday. “We have reached a point where this is really urgent. We can’t continue on this path of just hoping that emissions will go down, we’re going to actually have to take the actions.”

Eric Holthaus is a meteorologist who writes about weather and climate for Slate.com’s ‘Future Tense’. Follow him on Twitter.

The big storm of March 9-10 has caused significant new erosion to the ocean edge of the BNSF rail line running south of Crescent Beach in South Surrey, Vancouver region. I walked along the coastline for about two kilometers south of Crescent Beach yesterday. I suspect the shoreline damage occurs further south as well on the way to White Rock proper. But I can’t say; I haven’t seen it.

The new erosion has taken the ocean edge to within a few meters of the rail bed itself. The rail line sits about three meters above high-tide sea level.

As well as erosion damage to the rail bed, the storm caused breaches to the dike protecting homes in Crescent Beach. The gravel promenade/pathway along the Crescent Beach waterfront was strewn with wood debris and small rocks pushed over the dike by the storm’s waves. As well, the rock and gravel of the dike itself was eroded in several places and left strewn on the promenade.

This story relates to the ongoing controversy over relocation of the BNSF line inland. There are compelling social as well as ecological reasons to move the rail line inland, but big capitalist interests have resisted such a move for decades, notwithstanding ongoing posturing of concern by capitalist politicians. My article on that subject from November 2013 is here.