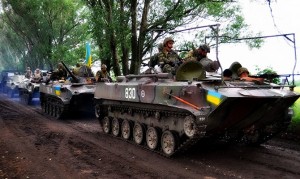 MOSCOW, Russia, July 14, 2014–Ukraine President Petro Poroshenko is trying to make good on his announcement on July 11 that his army or the fascist militias fighting alongside it will kill “dozens and hundreds” of people in the east of the country for every Ukraine soldier dying in the war his regime is waging there.

Since his pronouncement, his armed forces have been bombarding cities and towns in southeast Ukraine. Fighter aircraft, tanks and other armoured vehicles are engaged.

The heaviest shelling in recent days has been directed at the city of Luhansk and surrounding villages. A leader of the self-defense forces there, Igor Strelkov, told RIA Novosti (quoted in Russia Today) there is fierce fighting in the suburbs of Luhansk, which is located not far from the Russian border. “The enemy has thrown in about 70 tanks consisting of two compact armored groups. There is unconfirmed information that a helicopter with a SWAT team landed in the city,” he said. 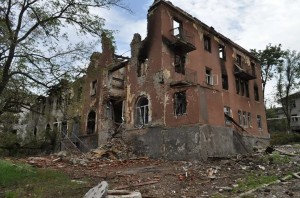 Strelkov says some 30 civilians have been killed by shelling and fighting in the last several days.

The Guardian reports in a video story that overnight on July 11, shelling hit houses and apartment buildings, factories and town squares in Luhansk (population 400,000) and in the town of Marinka near Donetsk city. Strelkov tells the camera that a milk factory and a cattle feed factory were destroyed and that 30 citizens were killed in the various attacks.

In the Guardian video, a resident stands in front of an apartment building damaged by shells and says, “I have no words to express my outrage, fear, confusion. Look at this [pointing to the building]. Look at this—this is the true face of Petro Poroshenko.

“He is not our president. This is his true face.” 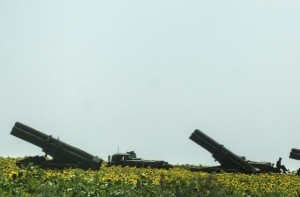 BBC has a report and photos of the multiple-rocket attack on Marinka’s houses. The Guardian reports on July 13, “Marinka, a nearby farming town, was hit with a barrage of artillery for the third day running. The assaults have caused large-scale destruction of apartment blocks, businesses and restaurants.”

Russia Today reports that nine people were killed and six others injured in shelling by the Ukrainian army near Trudovskaya coal mine in Donetsk region on July 12. There have been reports of other shelling in Donetsk but the city’s utilities and public transport are reported to be functioning normally.

RT also reports that according to the Twitter feed of the People’s Republic of Donetsk, the army fired on the town of Krasnogorovka in the Donetsk region on July 12. A school and multiple apartment blocks were damaged and “there were many casualties”.

In a story broadcast on the English service of Russia Today, a woman whose neighbourhood has been shelled is in tears and tells the RT camera, “I curse you Petro Poroshenko and Arseniy Yatseniuk” [Ukraine prime minister].

Poroshenko’s crazed threat and the attacks that followed are retaliation for a rocket attack by self-defense fighters overnight on July 10/11 that destroyed a Ukraine army armoured column, killed 23 soldiers and border police (some reports say 30 died), and wounded dozens more.

Russia has condemned the Ukraine government’s military offensive and it issued a particularly strong statement after a shell struck a home in the village of Donetsk, in Russia’s Rostov region, killing one citizen and injuring another. A government statement said there would be “irreversible consequences”.

A government official is cited in the Russian daily Kommersant as saying that Moscow was weighing up “targeted retaliatory strikes”, but was not planning any large-scale action.

“Our patience is not limitless,” he said, adding that Russia “knows exactly where they [Ukrainians] are firing from”.

There are persistent reports that some of the Ukrainian fighter aircraft are being flown by pilots from east European NATO countries. Prior to the change of regime in Kiev in February, Ukraine’s armed forces were ill-equipped and trained, adding to the belief that its pilots were in no position to spring into combat action.

Problems of equipment, training and motivation bedevil Ukraine’s ground forces, hence the heavy use of artillery and dependence on rightist and fascist militias as shock troops.

Russian President Vladimir Putin and German Chancellor Angela Merkel met in Brazil on July 13 and issued a call for a ceasefire. This is not the first ceasefire call and it’s not clear whether Merkel is merely playing to German public opinion. Her government is among those which have imposed economic and political sanction on Russia following the plebiscite vote in Crimea on March 16 to secede from Ukraine and join the Russian Federation. Polls show that a strong majority of Germans oppose assisting the Ukraine government’s military offensives.

Putin was in Brazil as part of a five-day, official tour that saw him also visit Cuba, Nicaragua and Argentina. In Cuba, the president made official Russia’s decision to cancel most of the disputed debt of $32.5 billion that Cuba was said to owe to Russia dating from the era of the Soviet Union.

Last March 27, a resolution at the United Nations General Assembly was approved to condemn Russia for accepting the will of the Crimean people expressed in their plebiscite. One hundred countries voted in favour of the resolution, 11 voted against and 58 abstained. Of the countries visited by Putin, Argentina and Brazil abstained and Cuba and Nicaragua voted against. The other Latin American countries to vote against were Venezuela and Bolivia. (Vote result here.)

The measured Russian response to events belies claims during the past several months by the Ukraine government and voiced by left and liberal opinion internationally that Russia has territorial ambitions over Ukraine. What is called the “annexation” of Crimea by Russia is cited as proof of those ambitions. But the population of that region voted to secede from Ukraine because it feared that the right wing regime that came to power in Kyiv in February would bring civil war to their region, as it has done in southeast Ukraine.

Russia is providing assistance to the tens of thousands of refugees displaced by Kyiv’s war, in the form of temporary shelter, cash assistance and job offers in Russian industry (many of those displaced are workers and technicians; southeast Ukraine is heavily industrialized). According to Russian Emergency Situations Ministry spokesperson Alexander Drobyshenko, there are 22,037 refugees from Ukraine currently housed in 326 shelters. Tens of thousands more refugees are finding their own means of shelter. (See a new article on this subject in The Nation.)

The number of internal refugees in Ukraine is unreported. The Kyiv government has no formal program of assistance to them. It has cut off social service payments to areas in southeast Ukraine considered hostile to its rule and under attack.

At the root of the Crimea vote and the popular resistance in southeast Ukraine is the desire of local populations for local and regional democracy, their rejection of the extremist, austerity economic program that Kiev is embarked upon in alliance with the U.S. and the European Union and their hostility to the billionaire capitalists that control the economy. Ukraine signed an “association agreement” with the EU on June 30 that will see many protections to industry and agriculture cancelled and will shut off access to existing markets in Russia and other countries in the region.

Well before the EU agreement, the regime that seized power in Kyiv in late February of this year began slashing spending on social services and civil infrastructure. Protests have taken place against these cuts and these will only grow as the full impact of the turn to Europe bites deeper and deeper.

The following appeal has been received by the UK campaign Solidarity with the Antifascist Resistance in Ukraine. It is signed by Mikhail Alexeevich Krylov, Representative of the Independent Donetsk Miners’ Trade Union. Krylov was co-chairman of the City Strike Committee in Donetsk during the big coal miners’ strikes in 1991 and later that decade. He is the head of the Independent Miners Union of Donetsk, which organises over 1,000 miners.

We need to explain to you the true state of affairs in Donbas [the region of southeast Ukraine that is resisting Kyiv’s rule]. The real picture of what is happening has been misinterpreted or hushed by European media. We understand that you may not find it easy to come to the correct conclusions; and therefore, we declare that we – the miners – are forced to fight with weapons in our hands for the sake of our lives – in the name of survival!

Our interest in this confrontation is one: end the bloodshed! The end of the war will be the trial of the war criminals that began it. We cannot give up because it would mean our full moral and physical destruction! From the outset, “Euromaidan” has been under the control of the big bourgeoisie: Ukrainian oligarchs and their foreign masters. In February of this year, there was a coup in Ukraine with the active participation of neo-Nazi organizations. In response to this, there was a protest movement in the South-East of the country, which at first was pushing innocuous slogans such as federalization and Russian as a second state language. This was greeted with terror.

In Donbas, there is a real war in which civilians are killed: including the elderly, women and children. You are blatantly being lied to that what war is between Ukraine and Russia. But it is not so! The war is between the people and a handful of oligarchs with the support of the EU and U.S. authorities. The tragedy in Ukraine is that, those in power, managed to infect the people with certain fascist ideas. We, the residents of Donbas, fight against all manifestations of Nazism and Fascism. We fight with weapons in hand, for our lives and the lives of our loved ones. We have nowhere to retreat – this is our land! We appeal to you, the workers of the European countries, asking for your help and solidarity: help us break the stronghold of fascism in Ukraine. This will be our common victory!

Note: Donetsk miners marched on June 18 against Kiev’s “anti-terrorist operation” and gave a 48-hour ultimatum that they would take up arms unless the war stopped.