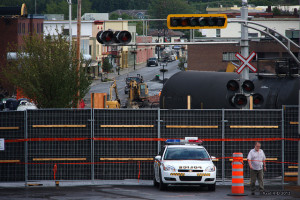 Aftermath of the disaster, photo by Axel Drainville, Flikr

An initial financial compensation agreement for many of the victims of the 2013 oil train disaster in Lac Mégantic, Quebec, has been reached with some of the oil and transportation companies (and their insurers) that were responsible for the tragedy. It was announced in mid-January. The agreement totals $200 million. It will grow as more companies sign on or as legal action against those not signing proceeds.

The money could begin to be distributed as early as this summer, but the agreement must first be approved by courts in the United States and Canada that are overseeing the bankruptcy proceedings of Montreal, Maine and Atlantic Railway (MM&A).

The announcement came from the trustee for bankrupted MM&A as well as from the Illinois law office of Meyers & Flowers, which is representing 41 of the 47 families of victims and some of the businesses harmed by the calamity.

The Canadian Press reports that contributors to the compensation fund include MM&A, its insurance carrier, rail-car manufacturers and some oil producers. More than a dozen companies have contributed.

A major outstanding issue is the ongoing denial of culpability by the largest companies involved in the disaster, including CP Rail, Irving Oil and World Fuel Services. They have not contributed a cent to the compensation fund, and according to Flowers, they will pay heavily in the courts if they continue to refuse to do so.

“Just because we reach a settlement with some of the responsible parties doesn’t mean that legal action against others doesn’t proceed,” he told Truthout. It is “reprehensible” that larger companies are not cooperating with the compensation fund, he added.

Robert Keach, the bankruptcy trustee for MM&A, told the Associated Press that he is casting a wide net in obliging companies to contribute to the compensation fund. He hopes it could reach $500 million. The AP reports World Fuel Services is presumed to be among the 20 or so additional companies being targeted to contribute to the settlement. Keach has asked for discovery documents from oil companies and subsidiaries including ConocoPhillips, Shell Trading US Co. and Marathon Oil Corp.

“When you examine the record of what happened, yes, a second-tier railway [the Montreal, Maine and Atlantic Railway] in poor shape was immediately responsible. But the bigger picture is what the larger companies knew and did,” said Flowers in a telephone interview.

“World Fuel Services knew about the high volatility of the Bakken, North Dakota oil they were loading. CP Rail and Irving Oil knew as well. But they did not take safety measures accordingly.

“They made things worse by contracting with MM&A, knowing the poor condition of its tracks and equipment.”

Flowers says the large companies placed a quest for profits before the safety of their employees and the people living in communities along the oil train route they fashioned.

Irving Oil contracted with World Fuel Services to buy and load oil train cars in North Dakota. CP Rail transported the oil as far as Montreal, through some of the largest cities in North America. CP does not operate east of Montreal in Canada, so Irving contracted with MM&A to move the oil trains from the CP yards just south of Montreal to northern Maine. There, the Irving-owned Southern New Brunswick Railway completed the transit to Saint John, New Brunswick.

The former MM&A line is one of two railway routes leading from North Dakota through Montreal to the Irving Oil refinery in Saint John. The other route going east from Montreal is the CN Rail main line running down the St. Lawrence River Valley and across northern New Brunswick. It has picked up the oil train traffic since the 2013 disaster.

Irving Oil operates Canada’s largest refinery in Saint John. It also has a large, oil export terminal in the city’s ocean port. That port is a key destination point for the proposed $10 billion Energy East pipeline. It would carry Alberta tar sands bitumen to Montreal on Canadian soil, then follow a similar trajectory as CN Rail to arrive in Saint John. Presently, there is no all-Canadian oil or bitumen pipeline from Alberta to eastern Canada.

Flowers doesn’t know whether and when all the companies responsible for the Lac Mégantic tragedy will join in a settlement. “The only guarantee I can make is that in the event they choose to not cooperate, we will hunt them down in the courts and they will pay heavily,” he said.

“We will turn over every stone on earth before we give up on them and intend on pursuing them in Illinois and any other state to ensure they’re brought to justice and held responsible for this disaster,” he told The Canadian Press.

Irving Oil was contacted several times by email and phone for this article and did not respond.

The Quebec government will receive the largest amount of money going to governments, Blais reports. That will include the costs of environmental cleanup and recovery of the $25 million Quebec has paid to victims in the form of interim compensation.

Flowers says the exact proportions allotted will be adjusted as the legal action proceeds.

CBC Radio reports that the mayor of Lac Mégantic, Colette Roy-Laroche, is pleased with the interim settlement. She has been working for the past year with the new owners of the bankrupted MM&A to resume oil train shipments along the dilapidated rail line.

Crude oil train traffic in Canada and the United States is booming. So far, the Pacific coast of Canada has escaped the worst of the scourge. Although the railway volume to the Vancouver region is small by North American standards, a January 15 article in the Vancouver Sun reports that crude oil carloads have risen from just six in 2009 to 3,381 in 2013. The year 2014 is on course to equal 2013.

In December, federal Industry Minister James Moore restated the ongoing threats of federal and provincial governments that if citizen protests in British Columbia continue to block two proposed tar sands pipelines to the Pacific coast of the province, “There will be rail.” He even went so far as to invoke the tragedy of Lac Mégantic to promote his government’s pro-fossil fuel agenda. “The people of Lac Mégantic wished they had pipelines instead of rail,” he told the Sun.

In Canada, there is no end of support and funding to move oil on rail lines. But it’s different when it comes to the truly important things that railway lines can provide – development of local and regional industry; passenger traffic, including all-important tourism; reduction of greenhouse gas pollution caused by trucks and automobiles; and the social and cultural richness that comes from all that.

Canada is seeing the ongoing abandonment of railway lines that do not serve the movement of get-rich-quick natural resources and manufactured commodities. The latest abandonment was announced last week in the province of Nova Scotia. The 135-year-old rail line on Cape Breton Island is to be abandoned by short-line railway operator Cape Breton & Central Nova Scotia Railway. Its parent company, Genesee and Wyoming Inc., bought the line from CN Rail when the latter abandoned it in 1993.

Nova Scotia’s rural regions have suffered deeply from the decline of railway service over the past five decades.

This article also appeared on Rabble.ca and on the New Brunswick Media Co-Op.

Related articles by the same author:

And see ‘Railworkers and environmentalists to teach each other‘ (conferences in Bay Area, California and Olympia WA, March 14 and 21, 2015, resp., organized by Railroad Workers United),
by Ron Kaminkow, in Labor Notes.