In first show-trial appearance, Mohamed Morsi and co-accused denounce the military coup in Egypt and deny legitimacy of their accusers

Egypt’s elected President Mohamed Morsi appeared yesterday for the first time in the show trial against him being staged by the country’s military. He and 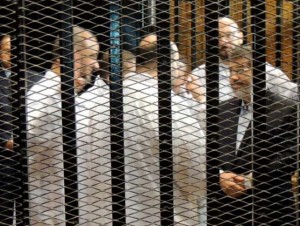 seven co-accused staged a courageous appearance, using the occasion to deny the legitimacy of the process and to denounce the military coup against Morsi on July 3, 2013.

Seven other co-accused have evaded detention and are in hiding.

The seven co-accused lined up honor guard-style and applauded when the president entered the courtroom cage where they were held during the proceedings. Then they raised their fists in the four-finger salute that symbolizes opposition to the coup.

The eight defendants continuously denounced the show trial and the July 3 coup, forcing the presiding judge to postpone the proceeding until January. 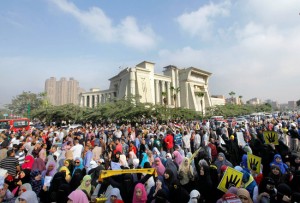 Trial of Mohamed Morsi–One of many protests against the trial, on Nov 4, 2013

Rallies against the coup and against the show trial were held across Egypt. According to the Globe and Mail’s Patrick Martin, who is hostile to the charge of a military coup against Morsi, more than 5,000 people rallied outside Egypt’s constitutional court in Cairo. They were not able to rally at the makeshift site of the show trial, held at a police facility.

A New York Times report recounts the events of Dec. 4-5, 2012 that form the basis of the show trial. Opponents of Morsi had rallied overnight in front of the presidential palace.

As increasingly aggressive protesters began encircling the [presidential] palace the previous night — even throwing Molotov cocktails over its walls — police refused to protect it. So on Dec. 5, leaders of the Muslim Brotherhood publicly called for the president’s Islamist supporters to do the job themselves, by force if necessary.

Hundreds of Islamists arrived that afternoon and forcibly evicted a small tent camp the protesters had set up near the palace and by nightfall thousands of Islamists were gathered to defend it. Thousands of Mr. Morsi’s opponents began to attack the Islamists and a night of deadly street fighting ensued, with rocks, Molotov cocktails and gunshots coming from both sides.

By morning, at least 11 people were dead, including at least eight supporters of the president and at least three non-Islamists, according to news reports. Prosecutors have not charged anyone with responsibility for the Islamists’ deaths, and the charges against Mr. Morsi accuse him of inciting the murder of three non-Islamists.

The Times adds that Morsi’s supporters went on to beat and detain anti-Morsi protesters, and turned them over to prosecutors to be charged. But the prosecutors immediately released the detainees, who were not charged. The Times notes that no charges have been brought against Morsi over the detentions.

The Times repeats much of this report in its article reporting on the Nov 4 court appearance (article link below):

Rights advocates said the most serious charges appeared both selective and difficult to prove. All involve a bloody night of street fighting last December between thousands of Mr. Morsi’s Islamist supporters and their opponents outside the presidential palace.

In the nights before the deaths occurred, increasingly aggressive protesters had begun encircling the presidential palace — some throwing firebombs over its walls. But the police refused to protect the palace. (Police leaders now boast that they never obeyed Mr. Morsi.) So on Dec. 5, leaders of the Brotherhood publicly called for the president’s Islamist supporters to do the job themselves, by force if necessary.

Hundreds of Islamists arrived that afternoon and forcibly evicted a small encampment the protesters had set up near the palace but without causing significant injuries. By nightfall, thousands of Islamists had streamed in to defend the site.

After dark, thousands of Mr. Morsi’s opponents marched to the palace to retaliate against the Islamists. A night of street fighting ensued, and thrown rocks, firebombs and gunshots were flying from both sides.

Eight of Mr. Morsi’s supporters were killed, and no one has been charged in their deaths. Mr. Morsi and his co-defendants are accused of ordering the killing of three non-Islamists who died on the other side of the fight, though the identities of the killers remain unknown.

A lawyer for Ahmed Abdelatty, who worked as an administrator for Mr. Morsi and was also charged with the murders, noted in court on Monday that many Egyptians had been killing one another without any encouragement. “How can you say that the office manager of the president of the republic is responsible for the death of this person or that person?”

But the prosecutors insisted that the defendants were guilty of “premeditated murder.”

“They had the intention and the determination to murder anybody who would stand in the way of the dispersal of the sit-in,” prosecutors said, reading charges.

Other allegations involve abuses that took place as the street battle raged on. Mr. Morsi’s supporters captured, beat and interrogated dozens of his opponents. In the morning, the Islamists sought to turn them over to prosecutors, expecting criminal charges for assaulting the palace. But the prosecutors immediately released them.

Prosecutors said Monday that they would also charge Mr. Morsi with conspiring in those detentions.

Four informative reports of the proceedings on Nov. 4 are here: