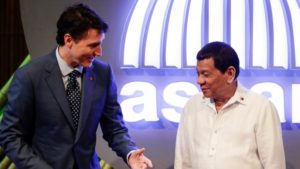 Canadian Prime Minister Justin Trudeau is in the Philippines for a summit meeting of the Association of Southeast Asian Nations (ASEAN). It is the first time that Canada has formally participated in an ASEAN summit, in this case in an observer status.

Many eyes are turned to Trudeau’s penchant for human rights crusading on the world stage. Is he sincere, or will he and his government be shown as hypocrites in the Philippines where a human rights emergency obviously prevails?

Toronto Star columnist Thomas Walkom infers this question in a column on November 13, arguing that Trudeau should use Canada’s new ‘Magnitsky Act’ to levy sanctions against Philippines President Rodrigo Duterte for his ‘war against drugs’. That war has seen thousands of poor Filipinos assassinated by police for alleged drug dealing. Police and government-sponsored vigilantes act as judges and executioners with the blessing of Duterte and his administration.

According to a complaint filed with the International Criminal Court in The Hague, [Duterte] is responsible for the murder of at least 9,400 people suspected of being drug addicts or pushers.

Some murders were allegedly carried out by police acting under his instruction. Others are said to have been committed by state-financed vigilantes. 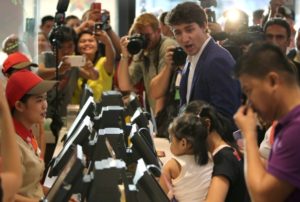 Canadian Prime Minister Justin Trudeau mixes with the plebs and orders lunch during a visit to a Manila district on Nov 11, 2017 (Czar Dance, Reuters)

Last month, the Asia Pacific Working Group of the Canadian Council for International Cooperation (CCIC), together with faith-based organizations, unions, rights groups and individual citizens sent a letter to Ottawa to address President Rodrigo Duterte’s extrajudicial ‘war on drugs’ and a military counter-insurgency program. They called on Ottawa to cease all military aid and sale of military equipment to the Philippines and called on Prime Minister Trudeau to speak out against the “severe deterioration” of human rights in the Philippines.

This month, a coalition of Filipino-Canadian groups issued a letter similarly calling on Trudeau to speak out.

A recent, in-depth report on CBS News titled ‘Inside Rodrigo Duterte’s drug war‘ is the latest in a long line of such studies into the drug war (actually a dimension of civil war) in the Philippines. Ottawa can hardly pretend to be unaware. But Trudeau has said he doubts he will voice any concerns. Upon departing the APEC summit meeting in Vietnam on November 11 en route to the Philippines for the ASEAN summit, he told reporters: “There are a range of issues that I could bring up with him, and I may bring [the killings] up with him if I have the opportunity, but there is no formal meeting with him. There’s always human rights concerns to bring up with a wide range of leaders.” 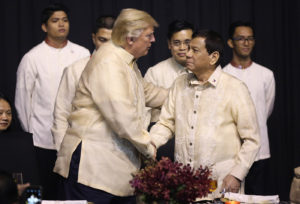 Trudeau will be aware, of course, that his ally Donald Trump considers that Duterte has done a “great job” with his ‘drug war’.

… how could the prime minister not [speak out against Duterte], particularly in light of Canada’s adoption of the Magnitsky Act last month? That act, named after a Russian lawyer who died in prison after accusing officials there of tax fraud, gives Canada’s government the power to impose sanctions and travel bans on foreigners deemed to have committed gross human rights violations.[1]

This month, Ottawa announced it was targeting 52 officials from Russia, Venezuela and South Sudan — including Venezuelan President Nicolas Maduro. With the possible exception of the three South Sudanese officials, I doubt that any of the 52 has as much blood on his hands as Duterte.

Bill S-226 is described by the Canadian Parliament as “An Act to provide for the taking of restrictive measures in respect of foreign nationals responsible for gross violations of internationally recognized human rights and to make related amendments to the Special Economic Measures Act and the Immigration and Refugee Protection Act.” It was approved unanimously by the Canadian Parliament on Oct 4, 2017. Canada’s unelected Senate later approved it, also unanimously.

Walkom has inadvertently pointed to the danger in any calls which legitimize Canada’s right to appoint itself a human rights champion and punisher on the world stage. Canada has a great deal of blood on its own hands from its decades-long drug war. Today, that war sees several thousand of Canada’s poorest or most vulnerable citizens die each year from drug poisonings (so-called overdoses). These deaths are a direct result of the police regime of illegality which surrounds injection drug use. Rather than treat injection drug use (and related issues of poverty, homelessness and racism) as the emergency social and public health issues that they are, the crisis is driven underground by police and judicial punishment and government’s block public health initiatives reaching out to the victims. (Read: The logic of drug legalization, by Jeff Berg, CounterPunch, Nov 15, 2017.)

Incredibly, Ottawa continues to stall the approval of safe injection sites in cites such as Toronto and Ottawa even though sites in Vancouver (the first one created in 2003 in defiance of federal law) have proven to save lives. Many lives.

A November 15 commentary published in The Conversation explains further:

… In 2009, when 428 deaths were caused by the H1N1 flu virus in Canada, an Emergency Operations Centre was mobilized 24 hours a day, seven days a week for several weeks. This provided more than 6,000 person-days of manpower to help coordinate emergency responses across the country. In comparison, only 113 person-days of assistance for the opioid crisis have been reported by the Public Health Agency of Canada — to help write reports in two jurisdictions last year — despite more than 2,800 deaths from opioid overdoses in 2016 alone.

Much worse is Canada’s long history of cultural genocide against its First Nations peoples. One consequence of this is the frightful and ongoing murders and disappearances of women and girls, a great many of whom are Indigenous. Ottawa’s failed response to that crisis goes back decades and has compelled it to undertake a formal public inquiry into the matter, the National Inquiry Into Missing and Murdered Indigenous Women Girls (and on Wikipedia).

How does a country such as Canada with such a poor human right record at home and abroad get away with appointing itself, via its ‘Magnitsky Act’ and other such measures, a judge of Russia and Venezuela? The answer is, quite simply, that the Act has nothing to do with human rights and everything to do with the cold war against Russia and the ‘regime change’ drive against Venezuela being waged by Canada alongside its U.S. and European Union allies. Many Canadians, including those who are left-wing in their outlook, are confused and bamboozled on these issues by a constant onslaught of disinformation by government and media.

If Canada gets away with human rights posturing, it’s in no small part due to a compliant mainstream media which is entirely complicit in the false and inflammatory accusations against Russia and Venezuela. Thomas Walkom betrays some of the media complicity when he writes (cited earlier in this article), “With the possible exception of the three South Sudanese officials, I doubt that any of the 52 has as much blood on his hands as Duterte.” Why the “doubt”? Canadian journalists need to practice more research so as to prove or disprove Canadian government claims and accusations on foreign policy affairs.

Walkom is one of the few journalists writing in mainstream media in Canada to bring an open mind to examinations of Canada’s foreign policy statements and objectives. Most of his mainstream colleagues merely fashion or embellish whatever line Ottawa has on offer, particularly when it comes to the conflicts in Ukraine and Syria and all things Russia. Some of the worst offenders are those who write and broadcast on the state-run CBC.

Canada is in desperate need of independent and progressive views on foreign policy in its media and in its political mainstream. It needs voices to oppose the drive to war and militarism that is engulfing all the major imperialist countries. This has been missing since at least the paramilitary coup in Haiti in 2004, to which Canada provided key military and political assistance. The situation has become much, much worse and more dangerous as a result of Canada’s backing of the right-wing coup in Ukraine in February 2014 and the related rise of threats and sanctions against Russia. None of the existing parties in the Canadian mainstream oppose this course.

So why the extreme delay in Canada in creating parties with new and progressive foreign policy outlooks? It’s related to the same political inertia which is delaying the formation of parties with cutting edge platforms addressing the global warming emergency and rising social disparities.

Explanatory note by New Cold War.org:
[1] Sergei Magnitsky was not a “lawyer”, he was an accountant. He worked for a U.S. financier, Bill Browder, who was very active in Russia during the wild years of the 1990s when much of the socialized economy of the former Soviet Union was privatized and sold for a song to Russian and foreign financiers, including to Browder. In 2008, Browder renounced his U.S. citizenship and became a UK citizen, reportedly in order to pay fewer taxes. In 2006, he was barred from further travel to Russia. In 2013, he was condemned of tax fraud by a Russian court. Magnitsky died tragically in a Russian jail in 2009 as he was facing related tax fraud charges. An inquiry determined that he died from medical inattention by prison authorities.

Bill Browder has campaigned internationally for ‘Magnitsky Acts’ in the U.S., Britain and now Canada. These would boost existing sanctions which target Russian business people and political officials and the entire region of Crimea. Canada’s Bill S-226 adds Venezuela to its list of transgressors.

Postscripts:
*  Justin Trudeau told reporters in the Philippines that he “mentioned” human rights concerns to Rodrigo Duterte when he spoke to him at an ASEAN summit event. The exchange was not a formal meeting. Trudeau’s ally Trump, meanwhile, issued a joint statement with Duterte following a meting of the two on November 13. It states, “The two sides underscored that human rights and the dignity of human life are essential, and agreed to continue mainstreaming the human rights agenda in their national programs to promote the welfare of all sectors, including the most vulnerable groups,” said a joint statement released on Tuesday, a day after Duterte and Trump met at the sidelines of an ongoing regional summit hosted by the Philippines.”
*  On human rights and climate change, Justin Trudeau’s actions don’t match his talk, by Thomas Walkom, Toronto Star, Nov 14, 2017

… The prime minister did not, for instance, warn Duterte and Suu Kyi that they could be subject to Canadian sanctions unless they mended their ways. In fact, Trudeau said, he pointed out that no one is perfect and that Canadian governments, too, have done bad things in the past. Which, while historically accurate, doesn’t help either Duterte’s victims or the Rohingya…

New sanctions by Canada against Russia as Ottawa follows Trump-led U.S. with its own ‘Magnitsky Act’, by Roger Annis, A Socialist In Canada, Oct 27, 2017