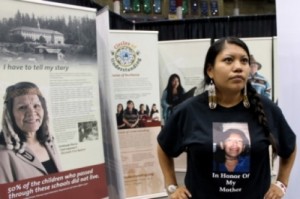 The Aboriginal Peoples Television Network recently obtained advanced release of new information compiled by Canada’s federal police force from police agencies across the country showing that over the past 30 years, 1,026 Aboriginal women have been murdered and 160 have disappeared. Eighty seven per cent are mothers.

The federal government has been insisting that the number of murdered women is 600.

Breaking news on May 5, 2014: The Conservative government in Ottawa announced today that it is withdrawing its proposed First Nation Education Act from the House of Commons order of business. Widespread opposition to the legislation caused the resignation on May 2 of Grand Chief Shawn Atleo of the Assembly of First Nations. He was supporting the legislation; First Nations opponents of it accuse him of harming First Nations interests by aligning himself too closely with the government.


In rejecting, once again, an inquiry, Prime Minister Harper said on May 2, “There have been some 40 studies done over the years; now is the time to take action, not to continue to study the issue.”

Postmedia columnist Stephen Maher commented on May 3, “I don’t think he would talk like that if we were talking about 1,026 dead white women.”

A Parliamentary committee that spent one year studying violence against Aboriginal women issued a report on March 7. Analysts at the Library of Parliament had recommended to the committee that a public inquiry be undertaken, but that fact and the recommendation itself were omitted by the Conservative-dominated committee when it reported.

Maher also writes that the government is devoting a pittance of sums to investigating the issue-$5 million per year beginning in 2015. And not all of that money is directly related to the issue, for example, $1.3 million per year is to be devoted to a national DNA database.

The prime minister’s wife, Laureen Harper, was recently caught up in the scandal when she dismissed the concern of a lone, young female protester who interrupted Harper at an event in Toronto raising funds for stray cats. Wearing mock cat ears, Harper told Hailey King it was ‘not the place’ for a discussion of missing women and she belittled King’s concerns, inviting her to donate to the stray cat cause.

Federal government inaction on missing women is matched by the provinces. The British Columbia government, for example, has refused to implement a key recommendation of its formal inquiry into missing and murdered women in 2011/12–to institute public transit service along the Highway of Tears.

The BC inquiry was prompted by the crimes of serial killer Robert Pickton and his associates. A key recommendation of the inquiry was to institute transit service along the Highway of Tears, the stretch of Highway 16 connecting Prince George in the north central region of BC to Prince Rupert on the northwest coast. From 1969 to 2006, 18 women have gone missing along that highway and other routes that lead to it. All but one were Aboriginal. A police investigation was only begun in 2005.

Canada is currently under investigation by the United Nations Committee on the Elimination of Discrimination Against Women (CEDAW). The investigation was begun in 2011, prompted by a formal request by the Native Woman’s Association of Canada and the Feminist Alliance for International Action.  The cases of missing women were a big reason for demanding an investigation.

Only one other country has ever been formally investigated by CEDAW—Mexico in 2003, following a series of murders of women in Chihuahua state. (2005 CEDAW report here, 93 pages.)

The complaint of the women’s’ groups to CEDAW also encompasses the issue of police violence against Aboriginal women. The international human rights agency Human Rights Watch conducted an investigation in 2012 of RCMP conduct towards Aboriginal women in northern British Columbia. (The RCMP is contracted in northern BC to also act as municipal police.)

1. The Crown-First Nation Gathering was a meeting on January 24, 2012 between Prime Minister Stephen Harper and other ministers of the federal government, and representatives of the Assembly of First Nations. The meeting was agreed to by Harper in December 2010 following a series of damming revelations of the poverty and violence inflicted against many of Canada’s nearly six hundred First Nation territories and against First Nations peoples living in urban settings.

A CBC news report at the end of the one-day gathering said:

The government is taking a small step toward First Nations governance, promising to remove barriers to self-determination and introduce new mechanisms to update the Indian Act.

But while they also agreed on developing economic opportunities for First Nations, there was nothing in the final statement about resource sharing or specific commitments to increase funding for education and other areas the chiefs have said are lacking.

The Idle No More movement for First Nations rights arose spectacularly in 2012, in part over rejection of the sort of collaborative political process symbolized by the Crown-First Nation Gathering.

In late 2012, Attawapiskat once again captured headlines in Canada when Chief Theresa Spence went on a hunger strike in Ottawa to protest inaction by the Canadian government is helping to resolve the housing crisis on her territory.

This article was first published on the Vancouver Observer, May 3, 2014.