No to war in Mali!

Speech in the German Parliament on behalf of Die Linke (Left Party) by Christine Buchholz, June 15, 2013

Germany’s Left Party (Die Linke) is opposing the participation of the German armed forces in the UN Security Council’s military mission in Mali, known by its acronym MINUSMA. Below is the text of the four-minute speech in the German Parliament (Bundestag) by deputy Christine Buchholz on behalf of Die Linke on June 15, 2013. 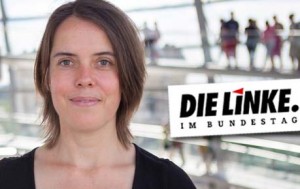 The video of the German text of Comrade Buchholz’ speech is here. The translation and publication of the text appears on the website Europe solidaire sans frontières, edited by Pierre Rousset. A French version appears there, too.

And now Christine Buchholz, representing the Left Party parliamentary group, has the floor.

Mr President! Ladies and Gentlemen. “What is happening today in Mali represents a new phase in the policy of looting the continent’s natural resources.”

This was the reaction of the former Malian minister of culture, Aminata Traoré, to the current military deployment in her country. The German Bundeswehr [German armed forces] is supporting the army of former colonial power France in the long-term occupation of the country. Traoré and other Malians are opposing this.

(Applause from the Left Party)

How does the fact that the government in Bamako has once again extended the state of emergency, until July, fit in with the positive assessment of what has been achieved which you have been giving since the beginning of the deployment? Nine opposition members of parliament – six of them from the north of Mali – are to lose their immunity due to the efforts of the Prime Minister. Is this what a policy of reconciliation looks like? How are elections supposed to take place in this situation?

The truth is: the deployment of the Bundeswehr does not help the population. It underpins a climate of repression in Mali. And there is a reason for this. As is so often the case, the goal here is not to stabilise democracy. Instead, your goal is to stabilise a regime which allows Western firms access to Mali’s economy and mineral wealth.

Almost the whole of Mali is divided up into square plots, for which licences to extract raw materials are issued. The goal is also to ensure that the Bundeswehr gets a foot in the door, so that German firms do not end up empty-handed if new deposits are found in the region in the future.

(Dr Martin Lindner: the image always has to fit!)

There are a number of these. Mali has large reserves of gold, copper, iron, diamonds, granite, natural gas, phosphate, bauxite and oil. Forty per cent of uranium for the French nuclear power plants comes from Niger – where it is mined on the Malian border. It is thought that uranium deposits also exist in Mali. What does this mean in concrete terms? In the Malian community of Falea, for example, a uranium mine is to be built. This mine threatens to destroy agriculture, the environment and cultural heritage, as well as to poison the ground water. The people of Falea are thus opposing the mine.

(Applause from the Left Party – Dr Martin Lindner (FDP): Is this also your farewell speech today?)

The Bundestag wishes to continue practically unchanged the Bundeswehr deployment in Mali which has been underway since February [2013] in the framework of the AFISMA mandate.* The deployment is simply being given a new label, a UN label. One might think that this opportunity would be seized to take stock: what did the French combat aircraft refuelled by the Bundeswehr during the mission do? What targets did they bomb? How many people died? There has not been a single word about this – neither in the motion nor in the committee, nor here in the plenary. One could gain the impression that it is part of your policy not to talk about the victims. And I view the SPD and Greens’ acceptance of this as a disgrace. You are more or less giving the Federal Government carte blanche for a deployment where nobody exactly knows what precisely is being bombed.

Aminata Traoré says “Mali is being humiliated. We are witnessing the militarisation of society”. Ladies and Gentlemen, the Left Party will not contribute to this humiliation.

(Applause from the Left Party.  Philipp Mißfelder (CDU/CSU): You should be ashamed of yourself, Ms Buchholz!)

* Note by Roger Annis: MISMA (AFISMA in German) was the international intervention force in Mali beginning in 2013, operating seperately from the France invasion force titled Operation Serval. It was supported by the foreign powers, including neighbouring African countries, but lacked a Security Council stamp of approval. Its role has been second fiddle to Operation Serval.

MINUSMA was formally created by UN Security Council Resolution 2100 on April 25, 2013, three days after the French National Assembly approved intervention without a single dissenting vote against. Its formal start is on July 1, 2013, with a projected size of 11,200 soldiers and 1,440 police. France’s combat role in Mali will remain entirely under French control and independent of the Security Council or other UN agencies.