The European aircraft manufacturing conglomerate Airbus has gained majority ownership of the ‘C Series’ passenger jet program of Montreal-based Bombardier Inc. The price to Airbus? Not a dime. How could that be? 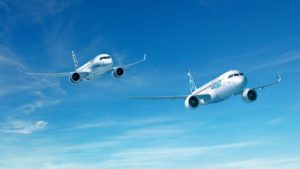 The C Series fills a niche in passenger aircraft size with models seating 100 to 150 passengers. That puts the larger version of the plane into direct competition with the smallest planes manufactured by Boeing and Airbus, seating 138 and 150 passengers, respectively. The program had options to build even larger versions.

Bombardier has spent billions of dollars in developing the C Series. But the company didn’t have pockets deep enough for that. In late 2015, the Quebec government stepped in a loan of $1.25 billion. The government in Ottawa ponied up $372 million in early 2017. These are called ‘investments’ to be repaid, but Bombardier has a long history of receiving ‘loans’ from the Quebec and Canadian governments and never paying them back.

The C Series has been certified for service, and several hundred orders have been received. But the program’s success depends on unfettered access to markets in the home turfs of Boeing and Airbus. The death knell of the C Series began to loom when the U.S. manufacturing giant Boeing made a formal complaint to the U.S. government that the C Series was unduly subsidized by Canadian governments. At risk was the largest sale of the plane to date—75 of them to Delta Airlines in the U.S. with an option to purchse 50 more.

Earlier this month, the U.S. Commerce Department ruled in Boeing’s favour and slapped huge duties on any sale of the C Series in the U.S. market. The ruling effectively killed prospects for the plane.

Airbus has a manufacturing plant in the right-to-work state of Alabama. The penalties against the plane when sold in the U.S. would not apply if it is manufactured there. Hence, Airbus had Bombardier over a barrel. Turn the C Series program over to Airbus, or it would die, along with thousands of jobs at Bombardier plants in Montreal and Belfast.

The rocky ride for Bombardier at the hands of Boeing and the U.S. government comes at the same time as tensions are rising in negotiations between Canada, the U.S. and Mexico to change the North American Free Trade Agreement. The Trump administration requested the talks in the name of its declared ‘America first’ trade and investment mantra. It wants NAFTA tilted more in the U.S.’ favour.

It seems that honour among thieves is a diminishing trait these days. Boeing and Airbus are heavily subsidized by their respective national governments, notably through their military aircraft manufacturing. Canada, meanwhile, has been a reliable ally of U.S. foreign policy on most every front. It has joined U.S. military efforts in Iraq and Syria to reassert common Western interests. It is working side by side with the U.S. and Britain in supporting the extreme-right government in Ukraine, including training its military and paramilitaries. The NATO military alliance is escalating tensions with threats against Russia and an associated military buildup in eastern Europe. Canada has joined U.S. threats against the socialist government of President Nicholas Maduro in Venezuela. Try as it might, though, Canada has been unable to completely avoid the wrath of ‘America first’ on the economic front.

The advantages that U.S. capitalists are seeking to gain in NAFTA talks at the expense of their rivals in Canada and Mexico are unprecedented in their scope. More than mere talk and bravado are involved.

Canada’s capitalists have tied their economic interests so closely to the U.S. over the past century that they have little option but to take what is meted out. That has already cost them a large entity in their manufacturing base—Bombardier. Who and what is next?

The larger question highlighted by this whole dispute is not even being discussed. In an era of global warming, air passenger travel is a ‘sunset’ industry. It needs to be scaled down as part of the society’s response to the global warming emergency. The argument to scale down air travel is compelling. But this is barely discussed in the environmental/global warming debate. Sadly for the planet and the future of human civilization, the political will among major capitalist governments to scale down air travel or anything else does not exist.

Score another win for Donald Trump’s high-handed version of protectionism. Monday’s decision by Montreal-based Bombardier to give away control over its much-vaunted C Series passenger jet virtually guarantees that the U.S. will get the lion’s share of any new jobs created. It also threatens to saddle taxpayers in Quebec and the rest of Canada with a good chunk of the $6 billion debt Bombardier incurred developing the jet.

How did Canada’s most important state-subsidized, high-tech company get into this mess? The long answer is complicated and involves corporate incompetence as well as the geopolitics of the global aerospace industry.

The short answer is the election of America First advocate Trump as U.S. president.

The latest chapter of this ongoing saga began in April when American aerospace giant Boeing formally complained to the U.S. Commerce Department about Bombardier’s proposed sale of 125 C Series jets to Delta Air Lines. Charging that the project had been improperly subsidized by the Canadian and Quebec governments, Boeing asked that an 80 per cent tariff be slapped on any C Series plane entering the U.S.

The Trump administration was more than agreeable. It imposed a preliminary tariff of 300 per cent, thereby making the Canadian-manufactured jet virtually unsalable in the lucrative U.S. market.

That posed a real problem. Bombardier’s solution was quite simple. It was to move production of planes intended for the U.S. market to a plant in Alabama. That non-union plant is owned by the European aerospace giant Airbus.

For Airbus, the arrangement is sweet. In return for letting Bombardier use its Alabama plant, it gets just over 50 per cent of the C Series project for free. It doesn’t have to pony up a cent. Nor does it have to absorb any of Bombardier’s sizable $8.7 billion debt, much of which was incurred developing the C Series.

For Bombardier too, this is a good deal. By moving assembly from Canada to the U.S., it avoids the 300 per cent tariff and keeps the Delta sale alive. As well, it gets to locate its American production in a so-called right-to-work state that promises cheap wages and is vehemently anti-union.

While it no longer controls the C Series, Bombardier does get to keep a 31 per cent stake in the project for at least 7.5 years. And it can take advantage of Airbus’ global reach to market the jet.

I am not sure that this is such a good deal for Quebec. Its 49.5 per cent stake in the project, for which it paid $1.25 billion, has been whittled down to just over 19 per cent.

Ottawa has sunk less into Bombardier. Its latest contribution to the C Series bailout was a $372.5 million loan — which it might get back. Bombardier has repaid roughly one half of the $1.3 billion in federal loans it and its predecessor companies were given between 1996 and 2008.

But the Airbus deal effectively marks another failure in Canada’s long-running efforts to nurture a homegrown aerospace industry. It seems we are not big enough to go it alone.

Economic benefits? The International Association of Machinists and Aerospace Workers, which represents Bombardier’s Montreal plant, says it is pleased that the roughly 2,000 people working on the C Series there are to keep their jobs. But the question of where new jobs might go remains unresolved.

Certainly, Alabama will get any new jobs involved in the manufacture of jets for the U.S. market. State Governor Kay Ivey has already issued a press release welcoming them. But where will the project’s new owner, Airbus, locate production for other markets?

It could choose Bombardier’s unionized plant in Montreal and win the eternal gratitude of Prime Minister Justin Trudeau. Or it could choose its cheaper, non-union plant in Alabama and score points with protectionist Trump who, whether you like him or not, is still the most powerful man in the world.

You’ve got to hand it to the brilliant, Machiavellian minds at Airbus. In one fell swoop, like an eagle swooping down on a dove, Airbus Group SE has seized the world’s most technologically advanced small passenger jet, the Bombardier C Series, for nothing – as in zero, zilch, nada – even though Bombardier Inc., with a little help from its government friends, had sunk about $6-billion (U.S.) into developing the product.

In doing so, Airbus has neutered a potentially strong competitor and dealt a blow to archrival Boeing Co., which has no plane that can compete with the C Series.

It gets better. Bombardier, not Airbus, is still on the hook for as much as $700-million in funding for the C Series over the next three years. Airbus doesn’t even have to assume any of Bombardier’s debt, which has climbed in recent years to almost $9-billion (Canadian), nearly double its market value. For Airbus, the deal is money for nothing, C Series for free.

And by the way, Airbus, which is 11 per cent owned by the French government and touted as a European corporate champion, had the sweet joy of exposing U.S. President Donald Trump as a true chump. When the U.S. administration slapped preliminary import tariffs of 300 per cent on the C Series a couple of weeks ago, the plane was effectively shut out of the world’s biggest commercial jet market. Facing catastrophic losses on the slow-selling C Series, poor, hapless Bombardier had no negotiating power. Airbus could write the deal it wanted…