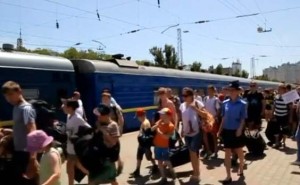 Children evacuated from the city of Luhansk to Crimea in early June, from a Reuters video report

An elaborate ceremony attended by the elite of Ukraine’s capitalist class was held in Kyiv on June 7 to inaugurate the president elected on May 25. Canada’s prime minister was on hand to confirm his government’s ongoing support for the new president, Petro Poroshenko, and the rightist regime that came to power in Kyiv in late February of this year.

Breaking news: Progressive and antiwar groups from Ukraine, Russia and Belarus held a two-day conference near Minsk, Belarus on June 7 and 8 and issued a call to build a broad-based, antiwar movement to halt the course to civil war of the governing regime in Kyiv and its NATO allies. The English translation of the call is here.

Three days earlier, U.S. President Barak Obama and European leaders met Poroshenko at a summit meeting in Warsaw. The leaders met to showcase the ongoing military buildup of the NATO alliance in eastern Europe. The buildup is aimed at the rebellion of people of eastern Ukraine who are demanding political autonomy and opposing the austerity economic program that the big imperialist countries have in store for Ukraine. It’s also the latest step in a decades-long policy of encircling and threatening Russia.

At least three other NATO military exercises are taking place in the near future—in a few days, a naval exercise in the Baltic Sea called ‘Baltops’ and a live-fire, land exercise in Estonia and Latvia called Sabre Strike; then a full wargame exercise in Poland in September called ‘Anakonda’.

NATO countries have also deployed warplanes and warships to indefinite postings in countries and ocean waters around Ukraine and Russia.

Poroshenko won the May 25 election by a wide margin over his rivals, but voter participation was down sharply from the previous presidential election. In 2010, 24.6 million people voted in a first round and 25.5 million voted in a second-round runoff. On May 25, 2014, 18 million cast a ballot in the only round that Poroshenko needed to win a plurality.

Shellings and bombings in the east 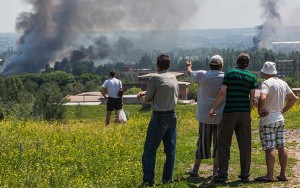 Shelling of the city of Slavyansk in eastern Ukraine on June 9, 2014, from Russia Today

The day after Poroshenko’s inauguration, heavy shelling and aerial bombardments of the city of Slavyansk by the Ukraine army and the fascist militias fighting alongside it resumed. The bombings continued the following day.

Electricity, gas and fuel supplies are being targeted. Residential areas have been hit indiscriminately. Children are being evacuated from the city.

(The Guardian reports on June 12 that several tens of thousands of residents have been forced to flee the city and settle in nearby towns and cities. Many of those remaining are living as displaced refugees. Tens of thousands of Ukrainians have taken refuge in Russia.)

In nearby Donetsk city on Inauguration Day, an assassination attempt was made against Denis Pushilin, the chairman of the Donetsk Peoples Republic. The DPR was declared in April, following the overthrow of the elected president of Ukraine by the ‘Maidan’ protest movement that came to be dominated and controlled by rightist and fascist forces. In a referendum vote on May 11, residents of Donetsk region voted in favour of self-rule.

The assassins killed an assistant of Pushilin, Maksym Petruhin. The New York Times reports that photographs on Ukrainian news sites show Mr. Petruhin lying face down on a street alongside a parked car with at least seven bullet holes in the rear door.

The city of Luhansk has also been bombarded. A detailed account of the aerial attack on the city on June 2 is written by Daniel McAdams on the Ron Paul Institute website in the U.S. In that city, too, children are being evacuated.

It seems that the US government actually approves of this use of force against civilian populations in eastern Ukraine. Two days after the air attack on downtown Lugansk, the Obama administration announced a significant US military support package for Ukraine. The aid will include, “A new tranche of $5 million for the provision of body armor, night vision goggles and additional communications equipment.”

The Washington Post bizarrely headlined its report of the Poroshenko inauguration, ‘Ukraine’s new president calls for an end to war’.

But already last month, within minutes of winning the presidential election, Poroshenko reaffirmed his election threats to deepen the civil war in eastern Ukraine that his predecessor launched in March. At the inauguration, the Post reported his refusal to dialogue with the rebellion in the east of the country. “Talking to gangsters and killers is not our avenue,” he said.

All along, the regime now headed by Poroshenko has called the autonomy movement in the east “terrorist”. Hardly the talk and actions of a ‘man of peace’.

Poroshenko has further inflamed matters, including relations with Russia, by saying he refuses to recognize the referendum vote in Crimea in March of this year that saw the big majority of people of that region vote to secede from Ukraine and join the Russian Federation.

He is also saying he will now organize regional elections in eastern Ukraine. In the present conditions, that means elections at the point of a bayonet. Voter participation in the eastern region for the presidential election was extremely low.

If the idea of a European government bombing its cities concerns the editors and journalists of mainstream media in Europe and North America, they aren’t showing it. A self-imposed censorship prevails over reporting of the violence and military offensive of the Kyiv regime and its allied fascist militias in the east. Another, big no-go area in corporate news reports is the fact that Ukraine’s government is one of the first, if not the only, since World War Two to include ministers from fascist parties.

Activists in Odessa have produced a documentary film about the massacre perpetrated by fascists in the city on May 2, 2014. Odessa 05/02 consists of film footage showing the rally of several thousand fascists from across Ukraine on that day which then proceeded to descend on antifascist and anti-austerity protesters in several locations in the city, eventually killing more than 40 people. 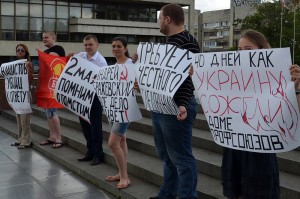 Borot’ba group members in Simferopol, Crimea on June 11, 2014 commemorate the victims of the massacre in Odessa May 2, 2014

The worst of the carnage occurred at the trade union building in the center of the city where many protesters had taken refuge. The fascist mob set the building on fire. Some people were murdered by rightists who entered the flaming building; others were killed as they escaped the inferno. (View the two-hour documentary film, with English subtitles, here.)

In Britain, the Stop The War coalition has launched a petition aiming for 100,000 signatures demanding that the British government withdraw from participation in this year’s Rapid Trident military exercise. Five thousand signatures were gathered in the first few days.

The group is calling for a demonstration in solidarity with pro-democracy fighters in Ukraine in September in Newport, Wales on the occasion of the annual NATO summit meeting.

In Athens, Greece, a call has been issued for an assembly on June 13 to launch a campaign of antifascist solidarity with Ukraine.

Antiwar and antifascist fighters will take much inspiration from the June 7, 8 antiwar conference in Minsk, Belarus. It involved a broad representation of social and political activists from that country as well as Ukraine and Russia. Read the conference statement here.

* Read here a June 9 report from the front lines of the city of Slavyansk by Harriet Salem of Vice News. And here is a young soldier in the Ukraine army appealing to a crowd in Kharkiv on June 10 to reject the course toward civil war of the Kyiv regime: