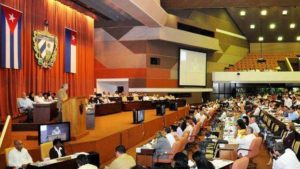 Raul Castro speaking in 2015 to the National Assembly of People’s Power in Cuba, one of the many institutions of popular democracy in the country

Cuba’s historic leader, Fidel Castro, passed away on November 25, 2016. A final, mass rally of the Cuban people to commemorate this giant of the 20th and 21st centuries took place in Santiago de Cuba on December 3. The following day, Fidel’s ashes were interred in a beautiful, modest stone memorial in the city’s Santa Ifigenia Cemetery.

Since November 25, a large volume of valuable and insightful analysis looking back on Castro’s life and examining Cuba’s future course has been posted to the New Cold War.org website in its dedicated ‘Cuba’ section.

Among the researchers and writers featured there are Helen Yaffe, John Kirk, John Wight and Marjorie Cohn. From Latin America, there is a valuable appreciation of Fidel written by Claudio Katz. And more.

Some of the writers’ material is written in direct response to the wave of slander and calumny heaped upon Fidel and the Cuban people by anti-socialist ideologues of Western media. The mainstream media in Canada has been particularly vengeful in its reporting of Fidel’s passing and his legacy, utterly ignoring the stupendous achievements of Cuba in areas of social policy, sexual and racial equality, land reform and ecological sustainability, and international solidarity.

A curious niche in the anti-Castro literature is occupied by the fractured political current known as the ‘International Socialists’. Its U.S. branch, the International Socialist Organization, has now published three very harsh condemnations of Cuba and its historic leader. The writer of the latest one, published in Socialist Worker.org on December 6, says, “The reality is that the revolution–a term that is inherently tied to the Cuban political elite, the same people who enforced and reinforced Stalinist-style policies and practices–is antithetical to socialism from below in principle and praxis.”

The writer, a Latin American by origin, says, “I realized I could no longer stand with Castro. Frankly, I would not even want him beside me in solidarity, because ultimately, he is a part of the problem. If the goal is to build a socialist movement from below that actively empowers workers to determine their own political and economic conditions, then Señor Castro is not with us.”

The author has coined a new phrase for Cuba that may catch on in the editorial pages of the group’s publication. He calls Cuba ‘Stalinism in the Tropics’. I would counter this with a phrase to describe the ‘socialism’ of the ISO and its co-thinkers: ‘Fairy tale socialism divorced from the living class struggle’.

One thing noteworthy in the latest commentary is the subtle shift for a political current known for describing Cuba heretofore (and the Soviet Union when it existed) as ‘state capitalist’. Now, we read, “Eventually, I recognized I was on the wrong side of socialist thought–the kind of socialism that historically distorted, undermined and even criminalized workers’ agency and curtailed democratic participation.” (My emphasis added.) So here is acknowledgement that Cuba is at least some kind of post-capitalist society. Some will view that as small progress, I suppose.

Here is a response to the ISO article, sent to me by a colleague:

Two comments. Firstly, the Socialist Worker article fails even to acknowledge the existence of the system of popular power that exists in Cuba, let alone mount an honest discussion of its strengths and weaknesses in relation to the actual Cuban context. These structures of popular power are simply dismissed as “bureaucratism”. A dishonest treatment? I think so.

Secondly, U.S. imperialism, its pressures and direct attacks are given only the most cursory mention – in essence, ignored. That makes it impossible for the author to discuss what would actually happen if the revolution ceased to direct and regulate political discussion and organisation in Cuba. The pluralist media channels that would appear would very quickly become conduits not for legitimate revolutionary criticism of government policies – a large measure of which is possible and already occurs through the institutions of popular power – but for the foulest type of reactionary propaganda, lavishly if covertly funded from the U.S. The alternative, organisational bodies would swiftly be transformed into mechanisms of active counter-revolutionary sabotage.

How to balance this revolutionary truth against the dangers of bureaucratism is a monumentally difficult problem. It won’t be solved by denying the difficulties, as the Socialist Worker article effectively does.

The real inspiration behind this spiel by the ISO is liberal idealism, dressed up as a pious concern for workers’ rights. I find it difficult to think of an instance where the fundamental dishonesty and intellectual cowardice of liberals appears more unmistakeably.

The torrent of anti-Cuba material that has gushed forth in mainstream media in Canada has focused on the accusation that Fidel Castro was a “dictator” and Cuban society is governed by a “dictatorship”. I need not repeat here the wise words in answer to such accusations penned by the forenamed writers listed on New Cold War.org. I draw particular attention to the essays penned by John Wight and by Marjorie Cohn. Fittingly, the most profound analysis that I have seen of the democratic challenge going forward in Cuba is written by a Latin American, Claudio Katz.

It’s been disappointing for this writer to see how little has been published in Canada in reply to the ideological assault by mainstream media and mainstream political parties (including NDP leader Tom Mulcair) against Cuba’s socialist project. Several published essays have tried in their own ways to defend Cuba’s socialist legacy, but they bent to the pressure saying that whatever have been Cuba’s achievements in social policy or even international solidarity, there is a pattern of “dictatorship” in the country. 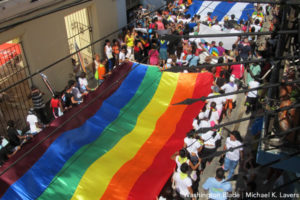 A march to commemorate the International Day Against Homophobia and Transphobia in Matanzas, Cuba, on May 17, 2016 (Washington Blade photo by Michael K. Lavers)

Perhaps the most common accusation from the left against Cuba has been that the country oppressed Cubans who were gay, lesbian and transsexual. One writer termed this “crimes” willfully committed by Fidel and his comrades. The essay by Teresa Gutierrez on TeleSur answers this accusation very well, as did John Wight in his essay. I would like to add one thing to their arguments.

Barring a disastrous military intervention by the United States against Cuba, or some equally disastrous event striking the entire world–a military attack by the reckless and dangerous NATO in eastern Europe or the Middle East; a military provocation against China by the United States; or a calamitous acceleration of the global warming emergency–gay, lesbian and transsexual people in Cuba can look forward to continued progress and equality in Cuba. The same cannot be said for those in the United States, Canada or Europe. There, the extreme-right is on the move. Events such as the election of Donald Trump in the U.S. and the electoral successes of the National Front in France are serious threats to the most vulnerable people in capitalist society—immigrants, refugees, other marginalized peoples… and gay, lesbian and transsexual people.

So let’s appreciate the profoundly democratic legacy that Fidel Castro has left to the world. And let’s take up his clarion call to fight for a world of justice and equality for all.