By Roger Annis, Oct 18, 2013, first published in the Vancouver Observer
** this version below is updated ** 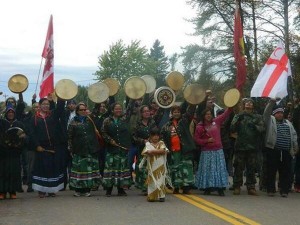 Yesterday, the RCMP launched a violent assault on a blockade protest against shale gas fracking company on the outskirts of the New Brunswick village of Rexton, just north of Moncton. The protest action has been led by the Mi’kmaq people of the Elsipogtog First Nation. A symbolic protest that was slowing traffic on a nearby highway has been in place since Sept. 30 to halt the fracking activities of Houston-based SWN Resources.

The fracking company is working on behalf of the notorious Irving family industrial empire of the province and it had obtained a court injunction several weeks earlier to halt the protest. The RCMP (which is contracted to operate as the provincial police in New Brunswick) moved in to enforce the injunction yesterday.

They attacked the protesters with guns drawn, using pepper spray and dogs while camouflaged police snipers had rifles pointed and at the ready. Forty people were arrested, including Elsipogtog (pronounced elsibooktook, population app. 2,000) Chief Arren Sock. When Chief Sock was arrested, RCMP vehicles were set on fire and trees were cut to block the adjoining highway.

Former Elsipogtog chief Susan Levi-Peters told the Globe and Mail, “It’s Oka all over again”, referring to the historic, months-long, armed standoff  between the Mohawk people and the Canadian and Quebec governments in 1990 at Oka, Quebec, just outside of Montreal.

Chief Sock and some of the other people arrested were released from jail yesterday. Solidarity actions are taking place across Canada and in the United States today. The Real News Network is showing video footage of the clash.

The situation has calmed overnight and presently there are only small numbers of protesters and police on site. 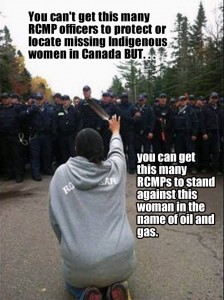 The Mi’kmaq say the fracking is taking place on traditional hunting lands and is a violation of their sovereign rights. Their concerns are shared by many other residents in the region and across the province. All are deeply concerned about the pollution of fresh water and land that fracking will cause.

New Brunswick is governed by a Conservative Party government elected in 2010. It supports gas fracking but the issue is highly contested. New Brunswick writer Dallas McQuarrie describes Kent County, the area where the protests have taken place, as “the poorest county in the poorest province in Canada”. (See his article, below.)

A broad, anti-fracking alliance has been forged in New Brunswick over the past several years. In November 2011, 600 people from 28 allied groups rallied at the provincial legislature in Fredericton.

In 2011, the Union of New Brunswick Municipalities voted by just 22-18 against a resolution in favour of a province-wide moratorium. Mayors in the eastern New Brunswick region where the RCMP assault took place voted 16-1 in July of this year to ask the government to impose a fracking moratorium in their region. The Member of Parliament for the area surrounding Elsipogtog and Rexton, Liberal Dominic LeBlanc, supports a moratorium. (See more background on fracking in New Brunswick here.)

There were arrests this summer at the protest site near Rexton. Twenty five of 35 charges have been dropped so far, according to CBC News.

The Mi’kmaq are the Indigneous people of the lands now known as the Canadian provinces of New Brunswick, Nova Scotia and Prince Edward Island. The late Donald Marshall Jr. was the most well-known modern Mi’kmaq by virtue of his victory against a police frame-up that saw him serve 11 years in prison in the 1970s and 1980s for a murder he did not commit. He later won a court victory establishing historic fishing rights that had been taken from his people.

Pamela Palmateer has written an excellent background article on this story that appears in today’s Rabble.ca. She writes, “Yesterday morning, we awoke to reports from the Mi’kmaw of swarms of RCMP dispatched to Elsipogtog to enforce Harper’s aggressive natural resource agenda. He has effectively declared war on the Mi’kmaw.” 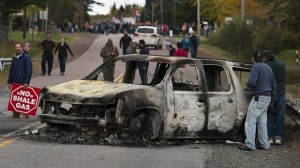 A burned out RCMP vehicle at the site of the police assault on the anti-fracking protest in New Brunswick on Oct 17, 2013.

“It is more than coincidental timing — it was obviously strategically calculated with the completion of the Governor General’s speech from the throne [opening of a new session of Parliament] and the end of the United Nations Special Rapporteur James Anaya’s visit to Canada.” Her commentary details the long history of police and government assault against the rights of the Mi’kmaq people.

October 19 is an international day of protest against natural gas fracking, termed the ‘Global Frackdown‘. Here is a follow-up news report to the police assault of October 17 in New Brunswick: ‘N.B. Premier supports RCMP actions’, Globe and Mail, Oct 19, 2013.

Roger Annis resides in Vancouver and can be reached at rogerannis@hotmail.com.

Update and article compilation: Oct 23, 2013:
The anti-fracking movement in New Brunswick has won important political and legal victories since the police assault reported above on their blockade protest outside of Rexton. Immediately following the police action, solidarity actions erupted across Canada and in the United States. In New Brunswick, protest actions continued in the days following the attack and a community consultation meeting on Oct 20 in Elsipogtog drew hundreds of Indigenous and non-Indigenous people.

On Oct 21, a New Brunswick judge declined to extend the injunction that had been won by SNW Resources in September against the blockade protest of its seismic drilling and testing equipment. That injunction was the pretext for the police attack on Oct 17.

Here is a report by an area resident and writer:
* New Brunswick’s shale gas protests, by Dallas McQuarrie, published on the website of Canadian writer Dennis Gruending, Oct 22, 2013

* Keep the frack off our land, by Brian Ward and Ragina Johnson, Socialist Worker, October 22, 2013
* Resources on Elsipogotg, by âpihtawikosisân, published on her blog, Oct 23, 2013