Fact and fantasy in Britain’s chemical poisoning allegations against Russia

Thomas Walkom’s March 16 column in the Toronto Star suggests a breath of fresh air amidst the torrent of anti-Russia propaganda being waged by British Prime Minister Theresa May and her NATO allies concerning the alleged chemical poisoning in England on March 4 of two former Russian nationals. The column is headlined ‘No evidence Vladimir Putin was behind UK assassination’. Alas, while the headline suggests a factual and balanced account to follow, the column falls short.

(Update: See below the weblink to the new and revealing article by UK writer Craig Murray.)

Walkom writes, “Labour leader Jeremy Corbyn, one of the few British politicians who does not assume a deliberate Russian plot, has said the attack could have occurred because Moscow ‘negligently lost control’ of the toxin.” This is a polite interpretation of Corbyn’s statement. 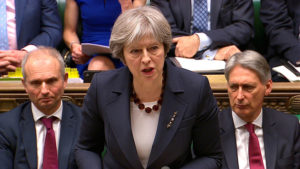 In The Guardian on March 15, Corbyn writes, “Theresa May was right on Monday to identify two possibilities for the source of the attack in Salisbury, given that the nerve agent used has been identified as of original Russian manufacture. Either this was a crime authored by the Russian state; or that state has allowed these deadly toxins to slip out of the control it has an obligation to exercise.”

So here we have the story being narrowly framed from the start. Is the May/Corbyn ‘either/or’ scenario the only plausible one? What evidence does May and Corbyn present that would lead us to rush into accepting the narrow parameters of their interpretations? None. We are to ‘trust them’, meaning to trust the police and military officials supposedly in charge of gathering evidence.

Corbyn writes that he supports the UK’s expulsion of 23 Russian diplomats. He goes on to repeat his call for a ‘Magnitsky Act’ to be introduced in Britain which, as already done in the U.S. and Canada, would give the British government greater powers to sanction “human rights abusers, along with a wider crackdown on money laundering and tax avoidance”. But isn’t this the same government which is selling arms to Saudi Arabia and marching in lockstep with the United States in every single warlike initiative being taken against Russia? How can anyone with antiwar sentiments propose increasing the powers of such a government?

Such blind trust is all the more galling in light of the new study by Medea Benjamin and Nicolas Davies which makes a grim and catastrophic estimate that 2.4 million Iraqi people have died as a result of the 2003 invasion of Iraq by the U.S., with the full backing and participation, let us recall, of the British government and military. Where is the outrage and uproar over that finding? What kind of society ignores such numbers while simultaneously engaging in an uproar over the illnesses of three people in England on March 4?

The Real News Network and guest Stephen Cohen have argued a false interpretation of Corbyn’s remarks in an interview broadcast on March 16. Cohen argues, “[Corbyn] said Theresa May has no evidence, and yet she’s prepared to ratchet up already a bad relationship with Russia based on this.” But Corbyn does, indeed, say there is evidence: “Either this was a crime authored by the Russian state; or that state has allowed these deadly toxins to slip out of the control it has an obligation to exercise.”

A reader of Corbyn’s statement in The Guardian was led to comment, “British justice is the best in the world. It has no need of evidence. Just right wing hysteria.” Another reader commented, “What an absolute crock of shit. These MPs are playing a very dangerous game. These constant warnings about a Russian threat to Britain only reveal their own resistance to a proper investigation and a rush to judge the situation before all the facts and evidence can be collected.”

A third commenter wrote frankly, “Anyone who believes what the government and intelligence services are telling us is an idiot.”

Walkom writes, “Britain has wisely asked the Organization for the Prohibition of Chemical Weapons to investigate.” But that is misleading. Britain has precisely avoided the route of the OPCW until now.

According to OPCW protocols, Britain should have taken its evidence and accusations to the OPCW and requested an investigation. But as of March 15, no samples of the poison that allegedly sickened Sergei and Yulia Skripal and a policeman on March 4 have been delivered to the OPCW, still less to Russia. Instead, Britain and its closest allies have embarked upon an unprecedented propaganda barrage, issuing ultimatums to the Russian government.

Russian Foreign Minister Sergei Lavrov pointed out some days ago already the discrepancies in Britain’s claimed interest in an OPCW investigation.

Right beside Thomas Walkom’s March 16 column on the op-ed page of the Toronto Star appears a pro-war rant against Russia by Marcus Kolga of the Macdonald-Laurier Institute in Ottawa.  What an embarrassment for such a rant to appear in a newspaper laying claim to a liberal history and outlook. Sadly, the Star op-ed editor’s choice is entirely in line with what the newspaper’s cross-town rival Globe and Mail has been publishing and the state-run CBC has been airing.

I have now received confirmation from a well placed FCO source that Porton Down scientists are not able to identify the nerve gas as being of Russian manufacture, and have been resentful of the pressure being placed on them to do so. Porton Down would only sign up to the formulation “of a type developed by Russia” after a rather difficult meeting where this was agreed as a compromise formulation…

*  Acceptable bigotry and scapegoating of Russia, by Natylie Baldwin, published in Consortium News, March 15, 2018  The scapegoating of Russia has taken on an air of bigotry and ugliness, based largely on Cold War-era stereotypes. Natylie Baldwin counters this intolerance with some of her positive impressions having traveled the country extensively.

*  The four large NATO powers issue statement condemning Russia, saying it is ‘highly likely’ that Russia staged a chemical poisoning in England, by Roger Annis, A Socialist In Canada, March 15, 2018