Exploding oil trains: Coming to a Vancouver neighbourhood near you?

The Vancouver Sun published in its Jan. 2 edition a rare look at oil train movement in the Lower Mainland by its excellent writer on the natural resources industries, Gordon Hoekstra. 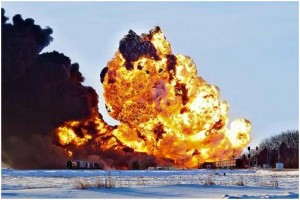 The total volume of oil train movement in the region is unknown. That information is kept under wraps by the rail industry and the federal government. Hoekstra reports that the Chevron refinery in Burnaby is receiving up to 14 train wagon loads of oil per day via CP Rail.

CN Rail unloads oil wagons in Langley and the oil is then trucked to Chevron. The company also transfers oil wagons to Burlington Northern/Santa Fe (BNSF) in New Westminster for transport into the U.S.

The Sun article was prompted by the Dec. 30 derailment, explosion and fire of an oil train just outside of Casselton, North Dakota. The train was being hauled by BNSF. It contained 104 oil wagons. According to BNSF, about 20 of those caught fire. This was the fourth major derailment and fire of a North Dakota oil train in the past six months. The first of those was the July 6 derailment disaster in Lac Mégantic, Quebec that killed 47 people and destroyed the center of the town. The other two occurred in Alabama and west of Edmonton, Alberta.

Casselton is a town of 2,500 people in the southeast of North Dakota. Mayor Ed McConnell says his town “dodged a bullet”. If the derailment had taken place in the town, it would have been another Lac Mégantic. As it was, no one was injured or killed.

McConnell told the Associated Press, “There have been numerous derailments in this area. It’s almost gotten to the point that it looks like not if we’re going to have an accident [ie that kills people], it’s when”.

He wants something done about the apparent free-for-all with oil train movement that is taking place in North America.

As the Globe and Mail and its lead reporter on the subject, Grant Robertson, revealed last year, the shale oil in North Dakota that is brought to the surface by the highly destructive practice of fracking is highly combustible and much more dangerous to transport than conventional crude oil. The Globe and Mail writers headlined a Dec. 3 story summarizing their findings, ‘The deadly secret behind the Lac Mégantic inferno’.

Oil companies and the railways have known about the dangers of North Dakota oil but have done little or nothing to take preventive measures. That includes Irving Oil of Saint John, New Brunswick. It was a 73-wagon oil train bound for Irving’s refinery in Saint John (Canada’s largest refinery) that derailed and exploded in Lac Mégantic. The citizens of the town never knew of the exceptional danger to which they were being exposed by an oil-by-rail scheme from North Dakota launched in 2012 by Irving and its railway partners, including CP Rail.

Three weeks ago, Canada’s Minister of Transport, Lisa Raitt, said she will change regulations in Canada and recognize oil as a dangerous substance when transported by rail. Rail safety advocates have argued for such a measure for many years. But whether and how the minister’s announcement would result in fewer oil train disasters is unknown. Presumably, trains will further reduce speeds in certain urban areas. But they will still be carrying the equivalent of liquid fuel bombs in their oil wagons.

Raitt did say that her announcement will lead to better measures to deal with oil train disasters when they happen. To say the least, that’s unlikely to assuage concern in communities that lie along the rail lines where oil is transported.

Leave it to U.S. Department of Transportation to do something substantive. On Jan. 2, the Pipeline and Hazardous Materials Safety Administration announced new measures to come into place later this year by which oil companies in North Dakota will be obliged to strip some of the volatile gases out of their oil before it is shipped. The measure will bump up the price of the oil, which is why the companies failed to undertake it themselves.

The Bakken oil field in North Dakota is now the third largest producing field in the U.S., behind Texas and the Gulf of Mexico. According to the Minneapolis Star Tribune, the state produces some one million barrels of oil per month. Sixty nine per cent of that is shipped by rail. The largest carriers are BNSF and CP Rail. Ten to twelve trains leave the region each day.

The rising volumes of oil and coal being transported by train in the western United States are displacing passenger service. The on-time performance of Amtrak’s popular route connecting Chicago and Portland, Oregon is the lowest in the network. In October, the on-time rate was zero. In November and December, it was in the low 40 per cent. Five Amtrak trains in December were cancelled outright due to ‘extreme freight congestion’.

The possible relocation inland and upgrade of the dilapidated BNSF line into Vancouver from the U.S. was discussed at a public forum in South Surrey on Nov. 26. The forum was reported in the Vancouver Observer. BNSF is rapidly expanding its transport of oil and coal. It’s not known what plans it might have for expanded oil transport into or out of Vancouver.

There is a compelling ecological case to move the rail line off its present route along the ocean. But if the proposal results in higher volumes of coal and oil being transported, then it will be a net loss. Society urgently needs to reduce its burning of fossil fuels if we are to avert calamitous increases in greenhouse gas emissions.

Responding to growing citizen concern over increased train traffic and fossil fuel shipments, the city council of Delta BC approved a resolution on Dec. 16 calling for a comprehensive health and environmental review of the movement of coal train and all other train movement in the Vancouver region. The resolution goes much further than the resolutions of many other municipalities that uniquely addressed the Fraser Surrey Docks (FSD) coal terminal proposal.

Local media reports missed the broader significance (beyond FSD) of the resolution. When Delta Mayor Lois Jackson was interviewed on CBC Radio One’s On The Coast on Dec. 17, she failed to report the full scope of the resolution. The program host evidently didn’t know about it and didn’t ask.

Delta city council members were not represented at the aforementioned Nov. 26 forum even though it hosts the longest sections of track owned or operated by BNSF in the Vancouver region.

This article was first published on the Vancouver Observer.